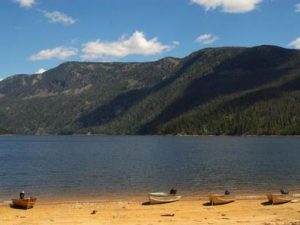 Camping in Utah is a great way to get outdoors, enjoy the blissful scenery of the American southwest, and encounter the spirits left over from the past! Who knew a campground could be haunted? Moon Lake in Utah is a gorgeous spot in the High Uintas of Duchesne County in Utah. Named ‘The Creepiest Place in Utah,’ Moon Lake offers visitors a ghostly girl, legends of strange cryptids, and otherworldly happenings. Ready to book your camping spot?

Want to experience the hauntings across the southwest for yourself? Check out our map here and book a hauntingly fun ghost tour in your city!

Moon lake is a high mountain reservoir on the south slope of the High Uintas. Recreation management is under the jurisdiction of the U.S. Forest Service, while the lake is part of the Ashley National Forest. A protected area, the lake has been used for recreational purposes before the Moon Lake Dam was completed in 1938.

In 1925, the first special use permit was issued by the U.S. Forest Service, allowing for the establishment of a recreational resort at Moon Lake. The very first lodge at the resort was constructed around 1927 or 1928 near the mouth of the Brown Duck Cree. The first cabins were built in 1928 as more and more visitors started to flock to the area for its natural beauty and relaxation. The cabins were constructed by the Lee Alger family. It’s unclear whether or not the lodge building was also built by the Algers, but it’s certain that a lodge burned down at the resort in 1934 when gasoline was added to a wood-burning stove.

The construction of the Moon Lake Dam made it necessary to move the entire resort to its present location. The original cabins were picked up and moved in 1935 by a team of horses after a Model T failed to complete the task — not enough horsepower, apparently.

In June of 1935, the Uintah Basin Record newspaper stated:

“the construction of new cabins which are to house the reclamation crew, and which will later provide tourist accommodations. A new store, pool hall and beer parlor are now in operation here, to accommodate the workers and visitors.” The original building, referred to in the article, is the core structure of the lodge today–a single-story use structure with an unfinished upper level. The original beer “bar” remains in the lodge today.“

The Alger family operated the resort until about 1944 when it was sold to Joseph H. Kemp, a local resident of the area. The Kemp family ran the resort until 1962 when Cal Clark and his six partners purchased the resort. The resort passed through multiple hands until it ended up in the hands of the Gardners, who purchased it in 2019.

Seems, tame — perhaps. Until you learn the hidden story of Moon Lake and the mysteries that surround it.

High Strangeness in the High Desert

Moon Lake, like other desert dwellings, is filled to the banks with strange happenings. Something about the desert just brings out the weirdness of the world, and Moon Lake is a hotspot.

Several Moon Lake visitors have reported encounters with unexplained phenomena during their visit. They have even reported ‘monsters,’ and ghosts. Moon Lake is probably most famous for its sightings of a creature in the lake that has only been described as a sort of ‘Utah Nessie.’

An article written by the previous owner Bill Reardon tells of ‘Moonie,’ the strange creature said to inhabit the depths of the mountain lake:

I first heard of the Moon Lake Monster from Gary Sutherland, father of one of the current owners of Moon Lake Resort at my first campfire circle there in 1994. Oddly enough, this seemingly far-fetched yet detailed account of a lake monster sighting turned out to describe a phenomenon I witnessed three weeks later and have yet to explain.

With no twinkle in his eye nor tongue in cheek, Gary described what I might see if conditions were right and I were darned lucky. He said the lake would be calm even mirror-glassy with no wind or boats to create a wake. This would only occur in the morning or around dusk because, throughout the rest of the day, breezes would riffle the lake’s surface, camouflaging any apparition of the monster.

When it did appear, however, one would see a V-shaped ripple moving slowly but steadily through the center of the lake, usually coming from the north end, and zigzagging but mostly running closer to the far shore. He said it would appear like a rounded object pushing water in front of itself, moving smoothly enough to create a ripple but not a breaking wave.

With a skeptical wink, I told Gary, “Okay, I’ll keep an eye out for that!”. Yeah sure.

Then one morning around mid-June, I saw it. I was drinking coffee at daybreak in the Moon Lake Lodge watching a mirror glass lake come to light and there it was—exactly as Gary had described. I gazed long enough to realize this warranted a better look. I grabbed my binoculars and stepped down the back stairs outside the lodge. Sure enough, no wake.

I walked toward the lake past the horseshoe and volleyball courts and stood up on a log near the flagpole. I focused the binoculars again on the apex of the V as it approached the near shore. The binoculars gave me a clear enough sight to know this was no beaver. And I don’t know of any fish species that schools in a goose-like V formation like that, either. No log, stump, boat, duck or wind was making this ripple and it was the only thing moving on that lake.

It zigged toward the far shore, not sharply, but rather at a wider-than-right-angle from the direction it traveled as it neared me. As it headed away, I observed the apex from the back and could see nothing breaking the surface; only the rounded push of water at one point, seemingly just below the surface. That point looked the same, coming or going.

After another couple approaches and retreats toward and away from the shore, the ripple gradually disappeared downstream in the suns brightening reflection on the lake.

I walked back to the lodge, wondering then what I still wonder today’’—”What the heck was that!”

The whole show had lasted less than half-hour and I met no one that morning who was “darned lucky” to see what I had seen. However, my wife and I both witnessed a reappearance a few weeks later that summer, exactly the same as the first sighting only shorter in duration. To this day, I can recount what I saw but not define what it was. In two full seasons at Moon Lake, we did not see the “monster”. Yet not a full week went by when we did not hear mention of the monster from locals, regular returnees, and even first-time visitors who had heard something or other from a friend who’d been to the lake before.

Variations of the vision I saw are most commonly envisioned in the smoke of campfires at the Moon Lake Resort and adjacent US Forest Service campground. They share this stage of wonder with countless other Moon Lake mysteries, histories, legends, lores, memories and speculative imaginings.

These best of times and memories do not all go up in smoke. They glow in the hearts and the hearths of the forest year after year at Moon Lake, “out of this world…but still in Utah”.

More personal encounters exist, too many to list in this article… however, they all can be found here.

Other visitors report seeing the apparition of a little girl who is known to approach campers at all hours. She only comes if you are alone, and she is believed to be the spirit of a girl who tragically drowned in the lake years ago. She comes to visitors asking for help, only to disappear shortly after.

So, is Moon Lake truly haunted? Do strange creatures reside in the depths of the chilly lake? That’s for you to decide — as for us, we’re staying out of the water.

For more haunted places all across America, check out our blog here!