Haunts at The Olde Harbor Inn 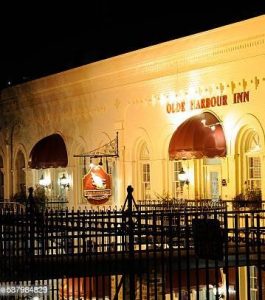 River Street is one of Savannah’s most popular stops. Its boutiques, restaurants and historic allure draw visitors from all over the country. Its old cobblestone streets tell a story of a dark past, however. If we step back a few hundred years we’ll see enslaved African people being shuffled into stone tunnels to be traded. Immigrant workers loading up cargo ships with cotton. Thieves and drunkards hanging out in the darkest alleys along the street. The same buildings that stored cotton and enslaved folks are now the hotels, offices, and cafes seen today. Among them is the Olde Harbor Inn.

One of the oldest hotels in Savannah’s historic district, the Olde Harbor Inn was originally used as a dockside warehouse before it was demolished and rebuilt for use by an oil company. A mysterious fire, strange occurrences, and ghostly activity add to the Olde Harbor Inn’s ever-growing story, but let’s start off at the very beginning.

The Early Days of River Street

Like countless other port cities in the 1800s, River Street was run rampant with crime, pick-pockets, brawls, alcoholism, and other less-than-great happenings. The docks brought in enslaved people from Africa as well as exported cotton. Slaves who arrived on River Street were shuffled into warehouses before being sold on Factor’s Walk. Many of them perished from malnourishment and heatstroke. Some of the slaves were put to work alongside Irish and German immigrants, many of whom were indentured servants.

Countless people died while working the docks and were either crushed by the massive bales of cotton or worked to death until they succumbed to exhaustion.

During their early years, Factor’s Walk and River Street were some of the worst places one could find in all of Savannah. Crime was in infestation that couldn’t be treated.

The warehouses that line River Street were there since the port city’s inception. Many of these warehouses still have iron shackles hanging from the walls, a symbol of the dark past that just can’t be hidden. The buildings on River Street were used for storage up until about 1890 when they were demolished to make way for one ‘mega warehouse.’ This new three story building was used as the main headquarters for the Tide Water Oil Company. This warehouse was supposed to be a grand addition, a step forward for the cotton moguls and business owners of Savannah. Fate had other plans, however.

As was the norm at the time, buildings were mostly made from various types of wood. It was an easy and cheap option for building, but the threat of fire loomed over at all times like a hungry vulture. In 1892, just two years after the warehouse was built, a fire broke out on the east end of Factor’s Walk. The strong breeze spread the flames, and within minutes the entire city block was engulfed, shrouded in dark smoke and massive flames. As Murphy’s Law would have it, 500 barrels of oil were being stored inside the warehouse at the time, so the fire was exacerbated as soon as it reached the building. Firefighters tried as they might, but they were unable to put the blaze out and by the time the fire subsided, the building was completely destroyed. No casualties were reported, but some believe the death of one man went unrecorded.

After the fire, an ordinance was passed that all new buildings were to be made from brick. The warehouse was rebuilt, and 700,000 bricks later, it was complete.

The Old Harbor Inn Was Born

The Savannah Historic District started to undergo revitalization, with buildings being rebuilt from brick, and new and exciting shops added. HLC Hotels bought the warehouse and began renovations in 1985. The Olde Harbor Inn opened for business at the brick warehouse in 1987, and today its one of the more premier riverfront hotels Savannah has to offer, its website claiming that “what was once a bluff-side warehouse is now a visitors dream…” The hotel even welcomes guests of the four-legged kind, as well as guests who don’t occupy a physical body, like Hank.

Spirits of the Olde Harbor Inn

So, who’s Hank? Hank’s origins aren’t too clear, unfortunately. Hank is thought to be the only casualty of the huge fire, and some even suspect that he was the one who started it. The blaze started near his office and Hank had gotten into a heated argument earlier that day with upper management. Many claim that he started the fire at an attempt for revenge. No casualties were actually reported from the fire, but many believe his death had just gone unrecorded. When his ghost began to appear after the building was reconstructed, he was affectionately named Hank.

These days, Hank is well-known and loved among staff and visitors of the Inn. Despite its ‘no smoking’ policy indoors, guests claim to smell the aroma of cigar smoke when his spirit appears, and others have seen a see-through apparition of a man smoking a large cigar around the Inn. He’s also known to move guest’s belongings when their heads are turned and throw coins into rooms at an otherworldly attempt to spook guests!

Hank is also known to overstep boundaries with female guests, cozying up next to them in bed and appearing late at night in their rooms. He is most commonly seen in rooms 405 and 406. One staff member even stayed the night in room 405 after a late-night shift and heard unexplained banging noises on the wall and the sound of someone jiggling the doorknob.

Hank is known to visit the kitchen every now and then as well. Despite the need for food, Hank seems to have a hankering (no pun intended) for good grub. He plays pranks on the wait staff and chef, unplugging appliances and stealing utensils.

While other strange happenings are reported at the Olde Harbor Inn, Hank would have to be the most experienced of all. He’s a very active entity with a need to be recognized and paid attention to. Guests have witnessed strange sounds at all hours of the night, a hazy blue mist that floats about the halls of the inn, and even disembodied voices saying hello.

Staying at the Olde Harbor Inn

Do you want to meet Hank? A stay at the Olde Harbor Inn gives you the best shot! Not only do you have a chance of coming across this cigar-smoking prankster, but the entire area of River Street and Factor’s Walk is considered one of the more active locations for ghostly happenings in Savannah.

For more haunted inns and hotels in Savannah, check out our blog here to learn the details of the most historic, infamous, and spooky lodgings in this southern city!