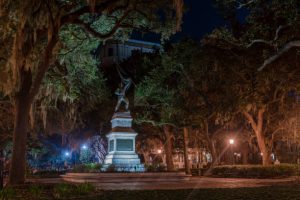 During the Revolutionary War, two major battles were fought right in the heart of Savannah. Both of them were bloody with heavy casualties and tragedy. Not only that, but both occurred in the area that would later become Madison Square. It’s even said that the area was a burial site and mass grave for soldiers who had perished in the war. The saddest part? Some of the soldiers thrown into the mass grave weren’t dead, just wounded and buried alive. One can only imagine the energies that were trapped within the ground.

These days, Madison Square is a picturesque and peaceful place, and if it weren’t for the statue of William Jasper, no one would ever guess that battles had taken place there. People visit the square to enjoy a sunny day or socialize, not realizing that there are hundreds of bodies buried just below their feet.

Plenty of visitors to the square have witnessed the darker side, however, and report black masses that move around and undulate in strange ways, apparitions, phantom footsteps, disembodied cries and yells, cold spots, even lights appearing in the sky.

If you’d love to experience the haunts of Savannah up close and personal, visit our website to book your very own ghost tour!

The Siege of Savannah

During the American Revolution, the British invaded and captured the city of Savannah. The south was particularly rebellious and held Savannah as a strategy to appeal to loyalist sentiments while the British used Savannah as a base to conduct raids along the southern coast.

A year later, a joint French-American army attempted to push the British out of Savannah once and for all. The battle was bloody, with heavy losses of life on both sides. The area near Madison Square was there the ground was held, and a pit was dug to bury the dead. Just over a few weeks, the Revolutionary Army lost over 250 soldiers whole the British lost 40, with countless others wounded — the bodies added to the pit regardless of if they were dead or not. There was no time to differentiate or provide critical care in the heat of battle.

While the British had won the battle during the Siege of Savannah, the area was ceded back to the United States when the Revolution was won by Americans.

In 1837, Madison Square was built alongside Lafayette and Puliski Squares. The square was named after James Madison. The Sorrel-Weed House can be found in the square, which is rumored to be one of the most haunted in the area, the site of a couple questionable ‘suicides.’

In the center of the historic square sits a large, looming statue of William Jasper. He was considered a war hero who died while raising the flag of his regiment. He did not perish until the flag was raised after he was mortally wounded, honoring his fellow soldiers during his final moments on earth. Locals tend to call Madison Square ‘Jasper Square’ instead, to honor his bravery and commitment to his brethren.

A quaint, beautiful park by day, a strange and otherworldly place by night. During the day, you’ll find locals taking a stroll, tourists taking photos and posing with Jasper, and plenty of picnics, dog walkers, and students. During the nighttime, however, the mood changes. The Jasper statue becomes foreboding, the trees begin to change shape, their spindly arms like spider’s legs reaching out across the paths. Unusually cold winds and the feeling of being watched. A darker energy permeates the aura of Madison Square.

It seems as if the dark energy has permeated into the surrounding area as well, because even the houses and businesses near the square are reportedly haunted as well. Excavators have even come across buried bodies from the Seige while constructing foundations for new homes. Take the Sorrel-Weed House, for example

“The home was originally the residence of the Sorrel family. Francis Sorrel was an extremely wealthy plantation owner, though his life was dotted with tragedy and scandal. After the death of his first wife, Francis went on to marry his wife’s younger sister, Matilda. A scandal on its own. She then committed suicide after finding that Francis was having an affair with one of his slaves, Molly. A few weeks later, Molly was also found dead in an apparent suicide. Could this be coincidence, or did Francis have something to do with the deaths of these women? The spirits of both Molly and Matilda have been reported to haunt the house to this day. Visitors experience a dark entity in the home and some even report feeling as though they are being choked. The darker hauntings could be caused by the spirits of the soldiers who died in the Siege of Savannah, which occurred nearby in Madison Square. Some even believe that there are remains buried underneath the Sorrel-Weed House.“

Another haunted home on the square is the Green-Meldrim House. This house is home to several entities, and they only seem to appear in the home when music is being played. Objects in the home are known to move from place-to-place on their own and voices are heard at all hours of the day and night, even if the home is empty of living people.

St. John’s Episcopal Church is also haunted, and choir members have even been pushed by unseen hands while performing hymns. The maintenance staff at the church report a dark entity that guards the church bells, and the apparition of a woman in black is also commonly reported.

Savannah tops the list of ‘Haunted Cities’ and is truly a crown jewel of the ghost aficionado community. With over three centuries of history, it comes as no surprise. The city has a dark history and an even darker reputation. Haunted cemeteries, houses, churches, parks, inns, restaurants — you name it, Savannah has a haunted version of it.

For another read on one of Savannah’s most haunted locations, check out our exclusive article about the Willink House. You’ll never believe what this little cottage is hiding.