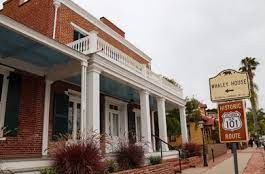 The Whaley House is one of Southern California’s most beautiful historic homes. Mahogany and Rosewood accent the home, Brussels carpeting and elegant Damask drapes conceal the darker past within. The Whaley House was constructed in 1857 for the residence’s previous owners, the Whaley family. The grand home has witnessed San Diego’s history from a front row seat, and has served many purposes throughout its lifetime.

The Whaley House was considered a mansion during its time and has served the community as a general store and even a theater. However, the time between the home’s changing faces was filled with chaos and heartache. Continue on to learn all about one of San Diego’s most haunted houses.

Want to experience the hauntings of San Diego for yourself? Book a hauntingly fun San Diego ghost tour with us!

Located in sunny San Diego, California, the Whaley House is maintained by a live-in caretaker who belongs to the ‘Save Our Heritage Organization,’ or ‘SOHO.’ The head of the Whaley family, Thomas, designed the home for himself beginning in 1856. Completed just a year later. It was the first of its kind in the city, and Thomas was quoted saying at before its completion,

“My new house, when completed, will be the most comfortable, handsome, and convenient place in town or within 150 miles of here.”

While its true that the home was beautiful, the horrors that followed after the birth of Thomas’ son, Thomas Jr., were beyond belief. His son soon contracted Scarlet Fever and died just eighteen months after his birth. Not soon after that, a fire broke out and completely destroyed part of the Whaley home that Thomas was using as a general store. He was dismayed, he had lost a significant amount in just a few short months and Whaley decided the home was too filled with heartbreak to stay — he soon moved on to San Francisco, leaving the Whaley House in a state of abandoned disrepair.

Over the next ten years, Thomas Whaley invested in a stock that proved to be extremely beneficial to his finances. With his affairs finally in order and his mental health back on the upswing, Thomas moved his family back to San Diego to attempt to repair what had been ruined by the fire so many years prior.

Tragedies at the Whaley Home

Come 1868, the home was completely renovated and yet again, the happiness and good fortune was proven to be short-lived for Thomas and his family. In 1885, one of their six children, Violet, decided to take her own life.

But, why? To answer that question we need to go back a few years before the tragedy.

In 1882, Violet and Anna Whaley married George Bertolacci and John Whaley. But just two weeks after Violet’s marriage to George, she awoke one morning during their honeymoon to find her husband gone. It turns out that George was nothing more than a heartless conman who only married Violet in hopes of securing some of the family’s fortune. When this didn’t happen, he bolted as soon as he could, leaving Violet heartbroken and alone.

The Tragedy Continues On…

During those days, society shunned women who returned home without their husbands. Divorce was frowned upon and it must have been her fault, unable to keep a husband — what was wrong with Violet? The divorce took almost a year to finalize and Violet simply never recovered from the shame.

At the age of 22, she shot herself in the chest and left nothing behind but a suicide note that quoted a poem by Thomas Hood –

“Mad from life’s history
Swift to death’s mystery
Glad to be hurled
Anywhere, anywhere, out of this world”

Another Whaley daughter, Corrine, was engaged to be married when her sister passed, but her fiance broke that union off after the scandal that Violet’s suicide caused the family. After these events, Thomas built a new family home not far from the original house. The original property was left vacant for nearly twenty years.

It was in this new home that Thomas Whaley died. He had been struggling with declining health for a while. He passed in 1888. In the years that followed, the original Whaley House began to fall into complete disrepair. Thomas Whaley’s son, Francis, took over the undertaking of restoring the Whaley homestead. Instead of making it his personal home, Francis turned it into a tourist attraction and promoted its history while serenading guests with his guitar.

The remaining Whaley family all lived in the original home until their deaths.

Ghostly Happenings of the Whaley House

One of the most famously haunted locations in San Diego, and all of the west coast, the Whaley House’s stories are told in magazines, movies, and television shows. Even before tragedy befell them, the Whaley family reported that their home was haunted by a poltergeist who they believed was the spirit of James Robinson, who was hanged on the land for stealing a boat before the Whaley House was even built.

Not only did the spirit of a boat-jacking thief haunt their property, but the Whaley House was also built atop an old cemetery. The Whaleys always told of hearing footsteps in the home, while passersby report seeing apparitions in the home’s windows while no one was home.

During the home’s periods of restoration later on, visitors and construction workers reported hearing unexplained sounds, sights, and even smells. Most people felt a foreboding presence while inside the home. This presence is believed to be James — he was known to torment the living by leaving muddy footprints and stomping on the floor into the later hours of the evening.

Further adding to the spine-chilling stories of the home is that of the young infant Thomas Jr. He is said to be heard crying in the halls, giggling in the distance, and some people even hear tiny footsteps.

A young woman’s apparition is reported most on the second floor of the home. Many believe this spirit to be that of Violet Whaley. Her longing to linger in the home is attributed to the fact that she would lock herself away in her second floor room while mourning the loss of her short-lived marriage.

Cold spots are frequently felt throughout the home, and the stairwells are also mentioned to be a hotspot for full-bodied apparitions. Thomas Whaley has even been seen sporting his favorite top hat and coat while peering down from the top of the steps.

Cementing the home’s hauntings, sightings of objects moving on their own, swinging chandeliers, and lights turning on and off by unseen hands are also reported.

The heartbreaking events surrounding the Whaley House and family surely add to the negative energies and hauntings of the home today. It cannot be denied that any happiness and joy the family had was fleeting. Their lives were filled with near constant sorrow and despair. Thrill-seekers and ghost-hunters alike now flock to the site of these tragedies in an attempt to catch a glimpse of one of the Whaley clan. Today, the residence serves as a museum that is open to the public. There, visitors can get a first-hand look at the preserved past that exists inside the handsome home.

Love our blogs? Have any ideas for future articles? Are you dying to talk about it? Give us a shout and follow us on social media and start the conversation!

For more about America’s haunted homes, take a trip to Savannah to the Sorrel-Willink House!