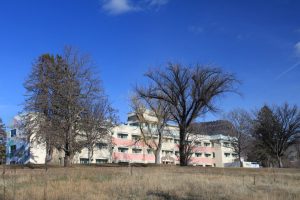 Tranquille Sanatorium is located in Kamloops, British Columbia, Canada, and was built in 1907 to treat tuberculosis — otherwise known as ‘The White Plague.’ The grounds that the hospital was built upon were previously used for ranching before the British Columbian government purchased the land for the construction of the sanatorium. Originally, the facility was named the King Edward VII Sanatorium and served tuberculosis patients specifically during the peak of the epidemic.

The British Columbia Society for the Prevention and Treatment of Consumption and Other Forms of Tuberculosis held its very first meeting in January of 1904 to begin the plans and fundraising necessary to build an isolated tuberculosis sanatorium. They soon discovered a property for sale, and after raising $58,000, they bought 600 acres from the family of early settler William Fortune. They also took over the lease for an additional 2,000 acres from the Dominion Government — thus, Tranquille Sanatorium was born. With just a hop, skip and a jump stateside, you can experience New York’s most haunted hotspots with our New York ghost tour!

The hospital opened in November of 1907 and by 1910 it could accommodate 49 patients and employed 12 attendants and 4 nurses. Eventually, the sanatorium had 360 beds. About half of those admitted to Tranquille paid for their stay. It cost patients about $55 dollars a month with the average stay lasting for 200 days.

At one point in the hospital’s history, patients were not allowed to open thrown mail and even were made to work without pay, which was seen as ‘therapeutic.’ Food, money, clothing, and other items were prohibited from being brought to patients from their visitors.

As the tuberculosis epidemic spread throughout the 1900s, a small community formed around the hospital, aptly named Tranquille. This small town had gardens, houses, a gymnasium, a farm, a fire department, and more. This was common with sanatoriums built in the Kirkbride style, a design influenced by Dr. Thomas Story Kirkbride, a 19th-century physician who developed a special type of design style for mental asylums, which are characterized by their bat-wing floor plan and sprawling grounds.

Many Kirkbride asylums, like Ohio’s Trans-Allegheny Lunatic Asylum, operated as makeshift communities — for decades the hospital had livestock, gardens, and farming fields. It also included an orchard, a dairy, a plant to generate steam heat, and a carriage shop. A large percentage of the labor carried out daily on the farm was done by the hospital’s patients. Skilled labor was seen by the Kirkbride Plan as a form of therapy and was also economically advantageous to the state.

In 1958, Tranquille Sanatorium closed its doors, but it reopened in 1959 to treat those with mental disabilities. It closed permanently in 1983 but briefly functioned as a detention center for young offenders until the 1990s when its tenure serving the area finally ended.

In September of 1991, Giovanni Camporese, president of A&A Foods, bought the land to turn into a resort and named it ‘Padova City’ as a reminder of his homeland. There were plans in place for the demolition of the site but interference from the government and Camporese’s own unrelated 1997 court case prevented his idea from coming to fruition.

The abandoned site of the sanatorium is now fertile land used for agriculture and it’s known as Tranquille Farm Fresh. Escape rooms and heritage tours are now offered at the old sanatorium. Some famous movies have even been filmed on the land, such as ‘The A-Team,’ and ‘Firewall.’

People from all over the world have sought out a visit to Tranquille, especially those interested in the haunts that are reported there. Said to be one of Canada’s most haunted locations, Tranquille Sanatorium has seen its fair share of death and dismay. Tuberculosis claimed many lives at Tranquille. Tunnels that run under the property are said to have even been used to not only transport dry goods to the hospital but to transport bodies out to the cemetery located on the property. This was believed to be better for the mental health of the patients still fighting the illness — it was thought that they shouldn’t be subjected to seeing corpses leaving the building on a daily basis.

Visitors to the sanatorium these days come looking for a tourist-y thrill, but are left with much more than they bargained for. Some patrons experience disembodied moans and groans that are certainly not part of the historic tour given of the hospital, and others have even reported seeing apparitions wandering the grounds as well as orbs flitting around the property and hallways of the massive structure. The hauntings at Tranquille are reminiscent of the ones reported at the Athens Lunatic Asylum in Ohio —

“While many deaths occurred in and around the asylum, as few truly stand out. One tells of a patient named Margaret Schilling, who disappeared on December 1st, 1978. It wasn’t until January the following year that her body was discovered in a long-abandoned ward. While her autopsy showed she died of heart failure, she was found completely named with her clothing neatly folded next to her body. More interesting in the permanent stain that her body left behind, imprinted on the floor, unable to be removed by numerous cleanings. Her spirit is said to be seen staring down from the window of the room where her body was found, she’s also been seen attempting escape, and is known the wander the building at night.

Other former patients are also said to have stayed behind, appearing as full-bodied apparitions standing in the empty wings of the former hospital, disembodied voices and yells. Squeaking gurneys, strange lights, and screams are also commonplace.”

It seems as if the echoes of these places of healing are still heard, regardless of the purpose the sites serve now. The energies from patients of the past remain at Tranquille Sanatorium, and visitors to the former hospital today leave with plenty of stories to tell.