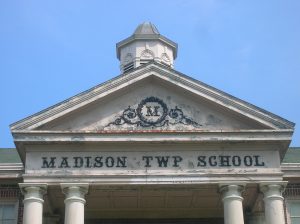 Poast Town and subsequently Poast Town School have become something of legend in recent years, and with an extensive history to match its many stories and legends, it’s a lesser-known haunted town that deserves much more recognition — let’s dive right in!

Poast Town is an unincorporated community in the southwestern corner of Ohio. (Dying to experience the hauntings of Ohio like never before? Check out our Cincinnati ghost tour!)

Located in Madison Township on State Route 4, the little town has been around for well over a century. Laid out in 1818 by Peter Poast, it was originally named West Liberty. The town was home to four generations of the Poast family, and children were intrigued by the alliteration and were known to chant ‘Peter P. Poast was the first Postmaster of Poast Town’ at their jump rope meetings and playground playdates.

Even before Ohio was a state, Peter Poast came into the northwest territory of the state seeking out land for a farm. He had come down the Ohio River on a boat, bought a team and a wagon and started up a trail to an area known as the Great Prairie. He eventually ended up in Madison Township, and decided to buy land north of Bankers. He knew that clearing the trees and shrubbery would be intense, but he saw the potential in the level and fertile land. After buying the land for $400 in gold, he returned and started the slow and grueling process of clearing the land.

Within a few years, he had laid a dirt road out to connect to other small settlements, which made it a perfect site for a village. He seized this opportunity for growth and laid out a town which he named West Liberty. Poast ran the farm and mills for years, traded horses, built large copper shops, and even saw the opening of a few general stores on his land. He died in 1847, but not before he fathered seven children with his wife, Catherine Brown. One of their children, William, carried on his father’s copper trade and bore a son which he named after his father, Peter P. Poast III.

Poast III lived through the golden era of Poast Town. When he was just 10, his grandfather was appointed in August of 1848 as the Postmaster of Poast Town. His salary was $57.20 a year, a grand earning for that time. When another West Liberty was established, he asked that the name of the village be changed, and residents agreed that it should carry the name of its founder, Poast.

The village would grow into a town, and saw the spoils of fertile farmland and hard work. The town changed exponentially over the years, not much information exists about the little Ohio town, which goes to show its true nature — quiet, and unassuming. (For more creepy ghost town haunts, check out our article about Elkmont here!)

Poast Town built this elementary school in 1937, where it has remained ever since. While no one has died in the school as far as records go, there’s two main theories as to why the school is so haunted. Could it be a portal to the spirit realm? Perhaps some type of tragedy had taken place nearby in the past. We’ll delve into all of the theories below and you can decide for yourself.

One man, Darrell Whisman, was a student at the school in 1963. He also never left, and actually lives at the school! According to him, some of the other kids never left either. He reports hearing desks moving across the floors, footsteps, and voices.

One of Whisman’s construction buddies even experienced a scare up on the top floor while doing some work on the building.

“He’s “big and tough,” but even he let out a shriek while doing some construction work on the top floor.”He runs down to me. He can’t catch his breath and he’s saying, ‘There’s something up there,'” Whisman said. “I thought maybe a dog or possum got inside. But then he says, ‘Dude, it’s a ghost.'”

Since he and his wife moved in, more than one hundred ghost investigation teams have combed through the school, each leaving with their own experiences. Countless skeptics have gone into the school and leave with a new understanding of the word haunted. Some investigators have come and immediately needed to leave, becoming physically ill when they went too deep into the building. The school is usually described as ‘creepy,’ and visitors tend to not stay very long. Whisman tells of visitors being touched by the entities, and he’s had his name called out a few times during his stay there. He states that he’s the schools protector, and promises to never tear it down or sell the land. The school has some sort of otherworldly hold on him, it seems, as he states often that he plans to die inside of the building. The school even ended up with a motto — ‘when you leave, you believe.’

An explanation for the immense amount of activity and eerie encounters at the school could be explained by the two train crashes that happened just under a mile away from the property. One happened in 1895 and another in 1910 — both happened on July 4th.

The 1910 crash was considered the worst railroad accident in Butler county’s history. It involved the head-on collision of a passenger train and a freight train. The horrifying impact killed 24 people and injured at least 35 more according to historical records. Some historians say that the land that later became the Poast Town Elementary School was used as an emergency triage area for the train crash victims. So it’s not too far-fetched to assume that at least a few people took their last breath on the land the school was built atop.

The Ghost of Grayce’s Mansion

Visitors and residents alike have marveled at a beautiful Poast Town landmark, a stunning home that sits above the village of Mount Pleasant across from a cemetery as old as the town itself. The mansion was built by multi-millionaire Paul J. Sorg as a gift to his new daughter-in-law, Grayce. While the mansion is known for its beauty, it’s also known for its ghost! The ‘Ghost of Grayce’s Mansion’ is said to be the spirit of a young maid who had served the Sorg family at the home. One evening, the maid tripped and fell down the narrow staircase at the back of the house, and she was found dead hours later.

It is said that her spirit refused to leave the mansion when her physical body was taken away, as she was so enamored with its lavish furnishings and decor, and all of the shining brass and gold fixtures. During the day, the ghostly maid hides in the basement, throwing small pebbles at the walls and into the cisterns, where the echo of the falling stone could be heard by those upstairs.

During the night, her spirit can be seen peering from behind drapes and blinds in the windows. Since the Sorg family only spent summers at the home, during Ohio’s brutal winters, passersby reported seeing a ghostly shadow standing in the windows of the home, watching the world turn outside.

So, there you have it — the haunted little community of Poast Town. A midwestern town with more than a few secrets to spill. Have you ever visited Poast Town or the Poast Town Elementary School?

For more reading on another abandoned ‘ghost town,’ check out our article about the Bell Family Farm!