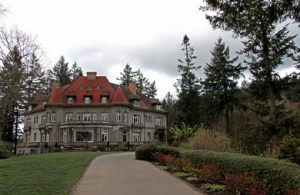 Framed on each side by the best greenery that the Pacific Northwest has to offer, the Pittock Mansion is a popular tourist destination. Situated near Macleay Park and the Cumberland Trail, the mansion is host to countless ghost sightings and strange occurrences and year after year, continues to be one of Oregon’s most haunted locations. Let’s dive right in to the history of this massive home and get the scoop on its ghostly inhabitants.

The History of the Pittock Mansion

The mansion was built in the French Renaissance style in 1914. Henry Pittock, the home’s namesake, was an Oregonian publisher and newspaper editor in need of a home to match his fanciful style. Starting construction in 1090, the 46-room estate proved to be a rather interesting build for its time. It started with blocks of Tenino sandstone hand picked by San Francisco architect Edward Foulkes. Because of the artistic nature of the build, it took an exceptionally long time to complete the home. The mansion was also filled to the brim with luxury electronics, including a cental vacuum system, intercoms, specialty lighting, an elevator, and even a restaurant-quality refrigerator.

The mansion’s interior is just as exceptional as the outside, and boasts featured styles picked by Foulkes. After the mansion was (finally) completed, Foulkes became well known in Oregon’s upper-class circles. The mansion soon became the high-class hangout for Portland’s wealthy.

Pittock’s wife, Georgiana enjoyed her life as a socialite in these circles. She spent her time taking strolls around the gardens with her friends and tending to her rose gardens. She even helped to create Portland’s Rose Society which held its first ever ‘Rose Show’ in 1889. Eventually her love of roses led to the creation of Portland’s famous Rose Festival which still goes on to this day.

Georgiana passed away at the age of 72 after a life of love and beauty in 1918 and just one year later, Henry Pittock followed — he just couldn’t last without his wife by his side.

The Pittock mansion remained in the family in 1958 when Eric Lass and Peter Gantenbein decided to part ways with it. Both men, Pittock grandsons, struggled to keep up with the massive amount of maintenance needed to keep the mansion beautiful and functional.

In 1962, the Columbus Day Storm hit Oregon, causing millions of dollar of damage to the Pittock mansion. It was decided to demolish the building, but the city of Portland stepped in, saving the home. The community came together and raised over $75,000 in just three months to save the mansion. Soon after, the city of Portland purchased the mansion for two-hundred and twenty-five thousand dollars. In 1964, the Pittock mansion was made into a historic site after the city saw how important it was to the community.

The Restoration and Nature Projects

In 1965, the mansion was open to the public and soon became a favorite among Portlanders. After the Pittocks passed away, the mansion had sat unused and abandoned for a while. Eight million dollars was needed to completely restore the mansion to her former glory. Of course, the Portland came together and raised enough cash to restore the mansion. With its location and it being situated 1,000 feet above sea-level, the Pittock mansion is a national favorite for birdwatching.

More than eighty-thousand visitors now flock (pun intended) to birdwatch and enjoy the glories of the mansion. The Macleay Park Trailhead begins almost six miles from the northern slopes of the Pittock hills. After a day spent hiking, visitors can take a breather at the mansion and enjoy a rest and the view.

Film Appearances and a Political Scandal

Hollywood has taken a liking to the Pittock mansion. In 1977, it appeared in the movie ‘First Love,’ starring William Katt and Susan Dey. In 1982, the mansion was part of a slasher flick called Unhinged. Regardless of content, Portlanders were happy to see the mansion in use and being appreciated by movie-goers across the country.

Despite is positive history, Henry Pittock once became involved in a political scandal in 1911. A Portland city council member, Will Daly, accused Pittock of inappropriately using funds to build a water line for a personal construction project. Pittock had proof that the water line was constructed outside of city lines and nothing became of the accusations. This ended up leading to lifelong feud between Daly and Pittock.

Ghostly Happenings at the Pittock Mansion

With such a colorful history, visitors have reported countless events of strange activity in and around the Pittock home. Grounds employees and visitors alike all agree that the mansion is haunted but that the spirits are not malevolent in any way. Many just assume they are the spirits of Henry and Georgiana, unable to leave their beautiful mansion in the afterlife.

The most reported activity occurs in the upper rooms of the mansion. Visitors report the overwhelming scent of roses — leading visitors to agree that Georgiana still roams the mansion. While most visitors report feeling kind of surprised by the sudden scent, they all say the presence feels warm and welcoming. Outside near the northern part of the mansion, the sounds of shovels can be heard hitting the ground. Staff members believe this is a ghostly groundskeeper, going about his duties. Like the Pittocks, their groundskeepers lived and died in the mansion.

Disembodied footsteps are also commonplace. Staff report windows opening and slamming shut on their own. A portrait of Henry Pittock is even seen moving around on the wall by itself. Some of the strangest reports include apparitions moving furniture, pictures, and decor from room-to-room. Could this be the Pittock couple rearranging their home to the way they like it?

The apparition of a woman in a long gown has also been reported, and as soon as she’s seen, she vanishes. One staff member got a real scare when she went to turn off the lights for the night. As she turned to leave, every single one of the lights in the mansion came back on. Clearly, someone wasn’t ready to go to bed.

The Pittock mansion is one of Portland’s crown jewels when it comes to hauntings. Luckily, the mansion has been maintained and loved just as much as it was when it was the home to the Pittock family. Have you ever visited this mansion? Did you encounter Georgiana or her husband?

For more Portland haunts, check out our article on the haunted North Portland Library!