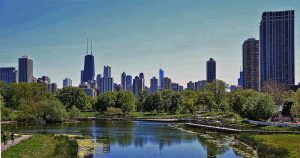 In Lincoln Park, Illinois lies a 35-acre zoo founded in 1868. As the fourth oldest zoo in North America, it’s seen its fair share of fauna and phantoms. Lincoln Park Zoo is home to more than 200 species of animals, and a Burr Oak tree that dates back to 1830 — three years before the city of Chicago was organized. If you’re dying to experience the hauntings of Illinois, why not join us for a ghost tour of the Windy City?

The zoo was founded in 1868 when the Lincoln Park Commissioners were given a gift of two pairs of swans by the Central Park Board of Commissioners in New York City. Other animals were donated to the park soon after, including two elk, three wolves, eight peacocks, and a puma. A bear cub was the first animal purchased by the Lincoln Park Zoo in 1874 from the Philadelphia Zoo for just $10. A ten-dollar bear!

The bear was a bit of a Houdini, and escaped from its enclosure at night. It was frequently found roaming around Lincoln Park. In 1884, the first American bison born in captivity was born at the Lincoln Park Zoo. At the time of its birth, American bison had almost been hunted to extinction in the wild.

From 1888 to 1919, the director of the zoo was Cy DeVry, who organized the collection, built new structures in the zoo, and obtained the very first elephant and monkeys. The zoo grew exponentially over the following years, with the construction of a new lion, gorilla, and great apes house. The 1940s was a launching point for the ongoing innovation of the zoo, both for the zoo’s inhabitants and visitors alike. In 1959, the Lincoln Park Zoological Society was established to supplement the city’s operational efforts.

The Lincoln Park Zoo has grown alongside the city of Chicago and is a cornerstone to the community. But, you may be wondering… how in the world can a zoo be haunted? Read on to find out!

Chicago itself is an American haunted hotspot. Known as one of the most haunted cities in the world, Chicago has seen more than its fair share of tragedy and death. One of Chicago’s very first ghost stories comes from the battle of Fort Dearborn. The Great Chicago Fire left a stain of negativity on the city, as well as the Eastland disaster, which was a boat that sank in the Chicago River in 1915.

Lincoln Park itself saw some of the worst gang violence in American history, including the 1929 St. Valentine’s Day Massacre. Lincoln Park also hosted one of the most terrifying deaths, known as the “Tylenol Murders”, where a flight attendant was found dead two days after buying a bottle of cyanide laced capsules at the Walgreen’s store in Lincoln Park’s Old Town.

Spirits roam the streets of Chicago, disturbed from their eternal rest and looking for attention. This could be caused by the fact that the Lincoln Park Zoo is located on land that was once the original city cemetery for Chicago. So, a zoo on a burial ground. That could explain the hauntings!

The idea was to start relocating the bodies from the original cemetery to another area but on October 8th, 8171, the Great Chicago Fire blazed through the city and destroyed the cemetery, the gravesites lost forever.

Chicago was hit by a massive blaze that lasted 2 days and it killed approxiamtely 300 people, destroying 3.3 square miles of the city, including 17,000 structures. The fire left more than 100,000 residents homeless.

The fire began in a neighborhood southwest of the center of the city. A long period of dry and hot conditions, coupled with strong winds and the wooden construction of the city led to the fire.

Once the fire ended, the remains were still too hot for a survey of the damage. Days went by before the city could determine how much of the city was destroyed. Eventually, it was figured that the fire destroyed about 73 miles of roads, 120 miles of sidewalks, 2,000 lampposts, 17,500 buildings and $222 million in property, which was about 1/3 of the Chicago’s value in 1871.

Haunts at the Zoo

Our first stop to the haunted zoo is the Lion House basement. The restroom here has been the subject of more than just a few ghost stories. Women report using the bathroom and while washing their hands, they see men and women in Victorian clothing in the mirrors behind them. One theory even exists that entities can become trapped in mirrors, and with the infinity effect the mirrors have, it’s no surprise that an unsuspecting spirit could get confused.

Members of zoo staff also report strange voices, especially a man yelling “get out!” Another entity near the restroom in the Lion House is looking for attention, and can be heard saying “will you look at me?”

Other spirits near the Lion House beg for help to leave the zoo, saying that they have become trapped there. Shadow figures have also been captured on camera in the Lion House women’s restroom. Perhaps the restroom was built atop a rather active part of the old cemetery?

Lincoln Park and the Lincoln Park Zoo is filled with activity of all types, both visual and auditory, as well as hosting a ‘heavy’ atmosphere and physical effects like nausea and lightheadedness. Though the bodies from the area have been reinterred, the verdant lawns of the park and the rolling wildlife of the zoo may conceal as many as 10,000 unmarked graves that were destroyed in the Great Chicago Fire. The spirits of the original cemetery are restless, looking for attention and assistance in passing over. Have you ever visited the Lincoln Park Zoo? Did you see more than just the wildlife there?

Forests are inherently mysterious, strange, and otherworldly. Generations of people have ventured into them, surrounding themselves with the innate beauty of nature and the peace and solitude that being within the trees brings. With so much wandering, it’s no surprise that items become lost, secrets are hidden, or strange things are found in the woods. Usually, forests are a place of happiness and oneness with Mother Nature, but sometimes, forests bring about a different feeling — one of dread and fear. Sound interesting? Check out our article about the nation’s haunted forests and the terrifying things found in them here.