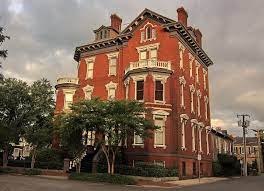 Savannah is well known and loved for its gorgeous architecture and preserved historic buildings. The Kehoe House is one of these marvels. A stately brick facade greets visitors with hospitality, a mysterious and slightly dark past reminds them that not all is as it seems in Savannah. The Kehoe House wasn’t just the private home of Annie and William Kehoe, it was also a funeral parlor for the majority of the twentieth century. Read on to learn the secrets of this gorgeous Georgian home.

History of the Home

It all started when William Kehoe immigrated to America from a small Irish county named Wexford. He moved with his family, his parents and siblings, he was one of eight children, bright-eyed and bushy-tailed, ready to start a new life over in America.

His family eventually settled down with other Irish settlers in the area. William took a liking to working with iron as a teen and apprenticed at an iron foundry. He eventually worked his way up to foreman, and even purchased the foundry. Just after WWI he built a new foundry on the river, making him one of the most successful and prominent men in Savannah at the time.

With his success came a score of eligible women to wed. He met and married Anne Flood in 1968, having children almost as soon as their wedding day. Their first home was small, but as William’s business grew, his family and home did as well.

William adored the historic district in Savannah and dreamed of giving his family a home there. He purchased the southern plot of the district for $950, $25,000 by today’s standards. The Kehoe Home was designed by architect DeWitt Bruyn, and cost a total of $25,000 to complete. It featured deep blood-red brick and Corinthian columns. Bay windows lined the facade and a turret rose proudly from the roof. Balconies and porches provided an outdoor living space that Anne took advantage of often. All of the trim on the home is cast iron, a testament to the success that William found working with the ore.

The couple and their ten children lived at the Kehoe home until the matriarch and patriarch passed away. The home was sold alongside the land in 1930. Thirty more years went by and many more hands passed the home from use to use. It was a private residence, boarding house, and even a funeral home before it became a historic bed and breakfast opened by football starter Joe Namath. It was sold again in 2003 and remains a B&B, opening its doors to residents and tourists of Savannah, giving a glimpse of what life was like for the wealthy of Savannah at the time.

The home originally had twelve rooms and a small townhouse that could be found across the courtyard. Today the courtyard home is used for romantic getaways, as the privacy and beauty of the house is a perfect place to unwind. With all of the lavish beauty comes a darker side — as said before, the home operated as a funeral parlor for quite some time, seeing the dead in their final moments before burial, witnessing the pain and loss of countless families who laid them to rest. Could this have caused some hauntings? Staff and visitors say yes.

Hauntings at the Home

Savannah as a whole is known for its ghosts and ghouls. As the oldest city in Georgia, there’s no lack of history. It’s a hotspot for ghost investigators and lovers of the unknown. There’s a few reasons why the Kehoe house is haunted. The most obvious, of course, was because of its tenure as the Goette Funeral Home.

Energies from countless souls passed through the Kehoe house at one point or another, and those energies are still felt, seen, and heard today. The scent of old perfumes and colognes is extremely common, reported after most guest’s stays. Scents of lilac and rose float through the bedrooms and hallways of the home, and musky tobacco smells sometimes drift down stairways. One spirit, in particular, is said to be one of the most intelligent around. He is able to interact with the living regularly, checking in on them as they sleep and appearing in doorways, only the vanish with the blink of an eye. Guests report the feeling of being touched while they sleep, a cold hand on their shoulder jolting them awake.

Some guests report something a tad bit spookier — the sound of gurney wheels, almost as if the sounds of bodies being brought into the funeral home are still replaying, over and over again. Some visitors report seeing a tall man, almost as tall as the doorways, passing through the rooms of the home and floating down the hallway. He’s seen with no legs, just a torso and head hovering about the home, checking on its visitors. People are sure to state that he doesn’t scare them, his energy is a very warm one. However, seeing a legless floating man is sure to make the hairs on your neck stand up.

A rumor persists about the Kehoe family and their ten children. It is said that two of these kids passed away right inside the home. Different versions exist of the story, but the most retold one states that the children got stuck in the chimney and couldn’t get back out. Their mother arrived home, finding two of her ten children missing, searching frantically all over the home. She was unable to locate them, but when a strange smell started to emanate from the chimney, the bodies were found. This exact story hasn’t been proven, but reports of child spirits at the home do exist.

Guests report their belongings being rifled through, almost as if a curious kid is looking into your suitcases. Others hear giggling and the sounds of toys banging around. Talking and tugs on pant legs are also commonly reported occurrences in the Kehoe home. Some visitors have even been so lucky as to see the face of a young child peeking from the windows, later to find out that no children are staying at the bed and breakfast. Could these be the Kehoe children that passed? Whoever they may be, it seems as if these spirits just want a bit of attention, some love from the guests that are visiting their childhood home.

Since the home is operating as a bed and breakfast, the possibility of experiencing these strange occurrences yourself is within reach. The home has worn many masks, and has a truly colorful history. A century of existence has created a time capsule, a rare glimpse into Savannah’s past in one of it’s most historic areas. Now one of three ‘Historic Inns of Savannah,’ the Kehoe home offers not just a peek into the past, but a glimpse into the spirit world. Whether you believe that the ghostly children here died in the chimney, or if you believe that the home is just old but empty of ghosts, it’s still worth staying and enjoying the history. Just don’t be surprised when an ice cold hand shakes you out of your sleep in the dead of night!

For more haunted Savannah, try booking a Savannah Ghost Tour with us, and learn about all of the Hostess City of the South’s spirits!