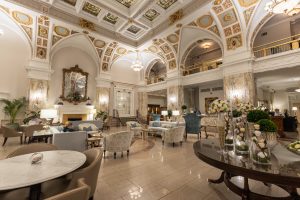 In the early nineteen-hundreds, Nashville was an up-and-coming city on the rise that lacked true luxury accommodations. When a group of businessmen set out to change that fact, the Hermitage Hotel was born. The world-class hotel and landmark set out to strengthen Nashville’s standing and reputation — and it succeeded, as it has been serving as the epicenter of Nashville life since its conception on September 17th, 1910.

The Hermitage Hotel has bore witness to over a century of Nashville’s history, with ‘meet me at the Hermitage’ becoming a common phrase spoken around town. The Hermitage has served countless patrons, held thousands of events, and hosted millions of guests along their travels. Some of these guests, however, decided the hotel was just too accommodating, and never checked out.

Located at 231 6th Avenue in Downtown Nashville, the hermitage was commissioned by 250 Nashville residents in 1908 and was named for Andrew Jackson’s estate, The Hermitage, which you can read about here. The hotel opened its doors in 1910. It was considered Nashville’s third ‘skyscraper,’ and advertised its rooms as noise-proof, fireproof, and dust-proof, with rooms for $2 and up nightly. The hotel had every possible modern convenience at the time including a telephone and circulating ice water in all guest suites. Along with its high standard of guest service, The Hermitage Hotel soon became a destination for all who visited Nashville’s downtown area.

The lobby itself is the main focal point of the hotel, a spacious and gorgeous Beaux-Arts style masterpiece, graced with ornamental plaster and painted glass. A grand staircase leads to the lobby from the street, the lobby’s walls built of golden-hued Sienna Marble. The entirety of the Hermitage Hotel, from its front steps to its veranda are dripping with fine style, distinctive architecture, and unforgettable details.

As one of Nashville’s finest and most popular hotels, it was a national platform for the suffragette movement in 1920. When Tennessee became the 36th state to ratify the 19th constitution giving women the right to vote. The hotel also hosted big bands and other famous names such as Francis Craig and his orchestra, Bette Davis, Gene Autry, Bill Cosby, and even former presidents such as Taft, Nixon, Wilson, Roosevelt and Kennedy.

As the popularity of the inner city declined in 1977, the hotel closed its doors. Local preservationists refused to see the Hermitage Hotel falter, and saved it alongside other historic landmarks in downtown Nashville such as Ryman Auditorium. The hotel has changed ownership a couple of times, undergone a complete renovation, and reopened in 1981 as a Park Suite Hotel. In June of 2000, Historic Hotels of Nashville LLC purchased the Hermitage Hotel and completely renovated the guest rooms and common areas, reopening on Valentine’s Day of 2003. The Hermitage Hotel is now designated a National Historic Landmark and was even listed on the Register of Historic Places in 1975.

Now, on to the hauntings — and while ghost sightings at the hotel are fairly rare, there’s enough reports to confirm that the Hermitage Hotel is home to some resident spirits.

Hauntings of the Hermitage Hotel

The Hermitage Hotel has an extensive past with energies unlike any other in Nashville. Once one of the city’s ‘grand old hotels,’ the Hermitage saw plenty of joy, vacations, happiness, drama, and tragedy throughout its century-long history.

Most sources report that room 912 has the most unexplained activity out of all guest rooms at the Hermitage. In this specific room, guests claim to be woken up by the ear-piercing sound of a baby crying in the wee hours of the morning. Why is there a spirit-baby in this room, you may ask? That question can be answered by a bit of local lore…

According to reports, a baby was accidentally dropped from the window of this room during the hotel’s heyday, and while no official reports were made about the tragedy, hotel room deaths generally don’t make it to media if there’s no foul play involved. So while the baby’s death cannot be confirmed officially, it would be foolish to think that over the course of the hotel’s hundred year history that no deaths occurred.

Another report to come out of the Hermitage Hotel is that of the ethereal woman in white. Believed to be on of the Edwardian women who called the hotel home in the 1910s, she is said to be the blame of countless strange happenings at the hotel. She opens doors, knocks drinks off of the bar, and even makes the hotel elevators malfunction.

Guests have reported seeing the large mirror in the lobby crack on its own with no apparent cause. As soon as they inform staff of the accident, the crack mysteriously disappears.

Who is this woman? Perhaps a stay at the Hermitage yourself will answer that!

Other Hauntings at Hermitage

Several other spirits have been seen wandering the hotel in lush, Victorian clothing. These ghouls are responsible for the poltergeist activity reported by staff and guests. Chairs being moved by unseen hands, doors opening and closing on their own, even wine bottles are said to tip over. The Hermitage Hotel is even on the list of Nashville’s most Haunted Hotels, proving that the reports do hold some weight.

If you’re visiting Nashville and would like a chance to stay at one of the nation’s most historically haunted hotels, give the Hermitage Hotel a try — not only will you be staying in a piece of suffragette history, but you may even encounter a few spirits during your stay.