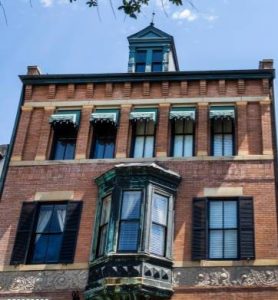 The Foley House Inn is a Savannah favorite — the unsolved piece of the Foley House puzzle has intrigued visitors and residents alike for years. During construction in 1987, workers stumbled upon a skeleton inside of one of the walls. The belief is that this person was murdered, his body hidden inside the wall.

There once was a house with a secret inside,

that a woman thought best to hide.

She had a life to live and children to raise,

and self-defense was rare in those days.

So, she made a grave behind the wall

and crafted a story to tell all.

until one day, someone uncovered his bones.

So, who is the Foley House skeleton and does his spirit wander the inn today? Read on to learn about this crown jewel of Savannah and perhaps you can figure out the mystery once and for all!

Looking to experience the hauntings of Savannah for yourself? Join us for a hauntingly fun Savannah ghost tour!

History of the Foley House

The Foley House Inn was built in the beautiful southern city of Savannah, Georgia in 1896. It was constructed at the orders of a widow named Honoria Foley. She created this home to serve as a bed and breakfast for the community — the first of its kind in the city.

Honoria was the widow of wealthy Irish immigrant Owen Foley. Their original home was one of the first boarding houses in all of Savannah. Like many of the homes and buildings in the city, the site is believed to sit atop graves from Savannah’s earliest settlers. In 1899, a great fire burned the town and the Foley House was actually built on top of the ashes of a home that burned down before it.

By all accounts, Mrs. Foley was successful and took great pride in her bed and breakfast. She was considered a wise businesswoman and made good financial decisions for herself after her husband’s passing. Her son-in-law and his five children lived there with her after her daughter Catherine’s death. They lived a comfortable life thanks to Honoria, and her family was grateful.

All was well and good at the Foley House Inn, until a guest truly overstayed his welcome and overstepped his boundaries. He began to make unwelcome advances towards Mrs. Foley, which persisted for days. One night, while Honoria was sleeping in her bed, the man snuck into her bedroom. Honoria grabbed the nearest object to defend herself — a candlestick. She swung at the dark shadowy figure, fearing for her life. She hit him a couple of times and eventually fell onto the floor — dead.

Honoria realized the problem she now faced. In those days, a claim of ‘self-defense’ may not have been enough to excuse the murder. If authorities were notified she could lose the inn and her freedom. Plus, a dead man in her bedroom just wasn’t good for business. She did the only thing she could think of at that point — hide the truth.

With the help of a friend who was a carpenter by trade, they placed the man’s body inside of the wall where he remained for nearly a century.

Honoria confessed to the murder on her deathbed in 1914, the story so wild that some folks just can’t believe it. Could this have really happened?

While the inn was undergoing renovations in the late 1980s, the crew discovered the truth — the skeleton hidden in the wall of the Foley House Inn. No positive identifications were made since the body was so far decomposed, almost mummified, but the story of Mrs. Foley’s murder has become infamous in Savannah.

If Walls Could Talk…

The discovery of the skeleton in the wall set off a string of unexplainable ghostly phenomena in the inn. Guests began to have encounters with unknown entities, one story told by a woman named Jerri that has since become one of the most famous reports.

Jerri was staying at the Foley House Inn in 2008 during a business trip. She was unaware of the inn’s past and was perfectly happy with her room and stay until one night when she returned late from a meeting. She was walking up the front steps when she felt a shove, she had been pushed out of the way by a man rushing past her. How rude, she thought. Her anger quickly turned into confusion and fear when the man turned around to look at her.

His face was pale, his mouth turned into an angry scowl, his features dark and eyes sunken. He looked dead. He stood for a moment at the door while Jerri was frozen, shocked at what she was seeing. He then vanished through the door , all while Jerri held her breath, stunned.

When she recovered her wits enough to enter the inn, she found the front room abandoned. She did however, hear heavy footsteps going up the staircase, until the sound disappeared into a random spot in the wall.

Could this have been the spirit of Foley’s victim trying to show this guest where his final resting place was? Perhaps he’s just restless, unable to move on due to his untimely death. Could his anger about his rejection have kept him here?

Other visitors see a man in a top hat wandering the gardens. Reports of cold spots are also made all over the property. The spirit in the garden is seen so much that the staff his named him ‘Wally.’

There is also a ghost of a small girl residing at the Foley House, and she is known to scream out in the parlor during bouts of silence.

The Foley House Inn is still operating as one of Georgia’s oldest bed and breakfasts. Guests can stay overnight in the inn. Most guests go for the charm but stay for the ghosts after they realize that it’s not only the living who are lodging there. Perhaps during your stay you’ll come across the screaming girl, or maybe you’ll run into Wally during your stroll in the gardens. If you get pushed rudely on the way to check in, please forgive inn staff, you’d be mad too if you were buried in a wall.

If you’d like to delve deeper into Savannah’a haunted inns and hotels, check out our article about the Marshall House, the oldest operating hotel in all of Savannah!