H.H. Holmes – The Beast of Chicago 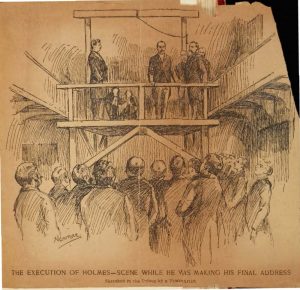 An alias that has a familiar ring to it, a household name due to its infamy and inhuman acts. H.H. Holmes was one of America’s very first serial killers. During the 1893 Columbian Exposition in Chicago, he lures victims into his elaborate and expansive ‘Murder Castle.’

Herman Webster Mudgett was his real name, a con artist and bigamist who was referred to by locals as ‘The Beast of Chicago,’ due to his dastardly and heinous crimes. Holmes is believed to have murdered anywhere between 20 to 200 people, killing many of his victims in a specially constructed home, nicknamed the ‘Murder Castle.’

Early Life of a Killer

Holmes was born Herman Webster Mudgett on May 16th, 1861 in Gilmanton, New Hampshire. He was born with a silver spoon in his mouth and enjoyed the perks of a privileged childhood. Said to be unusually intelligent, signs of what was to come started during his years in primary school. Henry was a problem child in school, constantly finding himself in trouble. The peers in his class even picked on him, forcing him to touch the class skeleton after learning he was afraid of the town doctor. Their prank backfired, this pivotal moment awakening an interest in medicine in Herman, as well as an obsession with death. He even started to perform operations on animals he encountered. His strange interests led him to become a medical student at the University of Michigan.

A Life of Crime

Holme’s lifetime crime spree began with a number of frauds and scams. With access to cadavers at the university, he started to steal corpses and used them to make false insurance claims. It’s also believed he used the bodies for strange experiments as well. In 1885, Holmes moved to the Windy City. He soon acquired work in a local pharmacy, using the name Dr. Henry H. Holmes. He eventually took over the business, rumored to have actually murdered its original owner.

Holmes had a three-story building constructed close by, creating an elaborate house of horrors. The upper floors were his living quarters, as well as many small rooms where he tortured and killed his victims. He was even said to have hired and fired multiple architects after they built for him so that no one would know the true design and footprint of the building except for him. There were trapdoors and chutes that enabled him to move bodies into the basement without detection or struggle. He usually burned their remains in a kiln or disposed of them in other, sinister ways.

“I was born with the very devil in me,” famously stated H.H. Holmes. “I could not help the fact that I was a murderer, no more than the poet can help the inspiration to song, nor the ambition of an intellectual man to be great. The inclination to murder came to me as naturally as the inspiration to do right comes to the majority of persons.”

During the 1893 Columbian Exposition, Holmes opened his home as a makeshift hotel for the visitors to the expo. As one can conclude, many guests did not survive their stay and the home soon became known as the ‘Murder Castle,’ and for good reason, it’s thought that close to 200 people were murdered there.

Many of the victims were women who were seduced, swindled, and killed. Holmes had a habit of getting engaged to women, only for his new fiancee to suddenly disappear. Other victims were lured with offers of wonderful employment.

Holmes fled from Chicago shortly after the World’s Fair to continue his get-rich-quick schemes. Jailed at one point for fraud, Holmes confided in fellow inmate Marion Hedgepeth about his schemes. Hedgepeth later told authorities details of the plans.

While authorities eventually identified Howard as H.H. Holmes, they, unfortunately, did not catch on quick enough to stop his final murders. Holmes murdered one of his associates in crime, Benjamin Pietzel, and after he told Pietzel’s widow that her husband was still alive and in hiding, he convinced her to let him travel with three of her five children — who later became his victims.

Holmes’ methods of murder ranged from strangling to poisoning, from makeshift cremations to setting his business partner on fire.

After spending several weeks running from authorities, Holmes was finally apprehended in November of 1894. During his time in custody, he admitted to killing 27 people. He was convicted and hanged on May 7th, 1896 for the Pietzel murder and buried in Philadelphia, Pennsylvania.