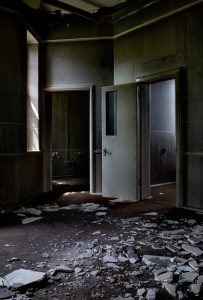 England’s history dates back further than our minds can even imagine. Much of the original structures still stand to this day, lending to the spooky atmosphere and ghostly reputation of the country. Hospitals are generally regarded as some of the most spiritually active locations across the world, and these two haunted England hospitals are no exception! Read on to learn about two of England’s Most Haunted Hospitals. If you find yourself stateside, check out the hauntings of New York with one of our hauntingly fun ghost tours!

Severalls Hospital was a psychiatric hospital located in Colchester, Essex, England. The hospital was designed by Frank Whitmore and William Town. It opened as the Second Essex County Asylum in May of 1913.

Villas were constructed around the main hospital building and there was even a detached building for the medical superintendent. The hospital’s history consists of nothing but tragedy, which you’ll discover below.

In August of 1942, the hospital was bombed by the Luftwaffe. Three 500-lb bombs were dropped on its west wing and thirty-eight patients were killed, many of them buried nearby in the Colchester Crematorium. Immediately after the bombing, a 21-year-old nurse named Murial Jackson attempted to save patients and was able to direct help to some of the patients using just a lantern.

A decade later in the 50s, psychiatrists experimented with new treatments at the hospital, using practices the are now considered inhumane, such as frontal lobotomies. Even sadder still, most of the ‘patients’ here were completely healthy people, admitted by their own families or friends for non-medical reasons. In her book, Madness in its Place: Narratives of Severalls Hospital, Diana Gittins wrote that:

“…often women were admitted by their own family, sometimes as the result of bearing illegitimate children or because they had been raped. As they would not always (or were unable to) carry out daily tasks, they were considered to be insane and some were even subjected to electroconvulsive therapy and lobotomy.”

Madness in its Place: Narratives of Severalls Hospital

In the early 1980s, the hospital went into a state of decline. Most of the hospital closed in the 1990s, and the last remaining section was finally shut down in 1997. There were later plans to redevelop the area into residential homes, although most people would prefer not to live on a site of such tragedy.

This run-down structure has fallen to nature, with climbing vines and a truly abandoned energy. What was once a beautifully ornate building is now just a shell of cold concrete. Today, urban explorers report hearing female screams coming from the old structure, perhaps remnants of the terror felt by the women who were forced here simply for being female. Full-bodied apparitions and brightly colored orbs are also commonplace at the hospital.

Nocton Hall is a historic building in the village of Nocton, Lincolnshire, England. The plaque on the side of the hall indicates that the original structure dates back to a stunning 1530. Since then, there have been two reconstructions. The hall has housed several prominent residents including the United Kingdom’s Prime Minister.

During the First World War, Nocton Hall was used as a home for wounded American Officers. During WWII, it was again used as a makeshift hospital after which it was taken over by the Royal Air Force. In 2004, fire destroyed the hall, leaving it a shell of its former self.

The land that Nocton Hall stands on contained a home that was built in the 16th century. The home was called Nocton Manor and was the property of a man named Thomas Wimbishe, and later the Towneley family. The home was gorgeous, with a beautiful brick facade and windows to spare. The house was reconstructed by Sir William Ellis in the 17th century and was renamed Nocton Old Hall. By 1834, Nocton Old Hall was engulfed in flames. The current building was built in 1841.

In 1996 before its most recent fire, an examination of the house was made and evidence was found that the building contained pieces of the original Nocton Old Hall. Nocton Hall was even visited by Henry VIII and his wife Catherine. She planted a large chestnut tree in the grounds on October 13th, 1541 — that tree still stands today.

With the original Hall’s pieces being built into the more modern building, along with the historic reminder of the great chestnut tree, it’s truly unsurprising that the entire grounds of Nocton Hall are reportedly haunted.

Nocton Hall itself was believed to be haunted by a sobbing ghost before it was burned down… again. The ghost of this crying girl was said to roam the halls and particularly enjoy haunting one specific bedroom in the building. Several staff members who stayed in this room were awakened on separate occasions at four-thirty in the morning to find the apparition of a young girl standing at the end of the bed. She was sobbing, speaking incoherently and crying about a ‘devilish man’ who had ‘done this to her.’

It is widely believed that this was the spirit of a young servant girl who lived in the home and was tragically murdered by the owner’s son after he had gotten her pregnant. She was in inconvenience to him, and he took her life.

A woman in grey is also commonly reported on the grounds, but there is no history as to who this woman could be.

Other hauntings include that of a soldier who is seen standing on the staircase of the derelict building.

The Royal Air Force’s Nocton Hall Hospital opened for medical use in the heat of June, 1947. The hospital was situated on the grounds of Nocton Hall, which was used to provide accommodation for female officers. The hospital was used by force members, their families, and local civilians until it closed on the 31st of March, 1983. With just over a forty-year history, the hospital saw the dark side of war first hand. In 1984 it was leased to the United States Air Force for use as a wartime hospital. During the Gulf War, 1,300 American medical staff were sent to Nocton Hall, a bit overkill for the 35 casualties that ended up being treated there.

For the low down on a stateside haunted asylum, check out our article about Athens Asylum!