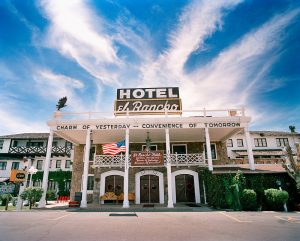 The El Rancho Hotel has been a base for movie productions since it opened its doors in 1937. Located in Gallup, New Mexico, it was constructed by R.E. Griffith, the brother of famous film director D.W. Griffith. The pair encouraged very early film production in the area because of the central location of their hotel. The hotel boasts a beautiful brick exterior, ashlar stone, and brick chimneys.

El Rancho Hotel is on the world-famous Route 66 and was the temporary home of many famous names of old Hollywood, such as Burt Lancaster, Doris Day, Jack Benny, John Wayne, Lucille Ball, and over 100 others.

Opening in 1937 as a base for movie productions, employees were trained by the Fred Harvey Company. When Interstate 40 was constructed, the property fell into decline. Armand Ortega bought the property at a bankruptcy auction and restored the hotel. The Ortega family has a long history in New Mexico, and they did not want to see this piece of New Mexico history fall into the sand.

The Hotel has been the backdrop for more than a few well-known films including Sundown, Fort Massacre, The Hallelujah Trail, and Streets of Laredo.

The hotel is a three-story building with a large portico and a central balcony, modeled after the southern antebellum homes of the 1800s. The National Park Service describes the hotel as having a ‘rusticated, fantasy-like appearance.’ The hotel’s slogan rests in neon above the entrance and says ‘Charm of Yesterday, Convenience of Tomorrow.’

El Rancho Hotel is now listed on the National Register of Historic Places and is a protected property, ensuring that its history will live on. Looking to head east a bit to the land where everything is bigger, (even the ghosts) Check out our article about Concordia Cemetery, Texas’ oldest burying ground!

A stay at the El Rancho means a stay where the stars slept. A visit also ensures that one will be following in the footsteps of Americans who traveled west in search of a better life.

With a rustic elegance and superior service, the Griffith brothers encouraged film crews and their stars to stay at the El Rancho during filming. The hotel was presented to travelers along Route 66 as a place to relax and rough it with the stars.

The El Rancho Hotel was in operation during the movie-making heyday in Gallup. Western movies were soaring in popularity throughout the 1940s and 50s, and Gallup was the perfect western town to provide a wild west backdrop for the films.

The El Rancho Hotel is not only known for its star-studded history, but also for its unruly, outlaw ghosts. A recent spike in ghostly activity has even caused several employees to call it quits — what could have caused the rise in unexplainable phenomena? Some say it has to do with a demonic ritual that was conducted on the property.

The El Rancho Hotel is no stranger to ghosts. Countless visitors and staff members have reported ghostly happenings during their stays and shifts at the hotel. One employee, Liliana, has been working at the hotel for over 10 years and had her fair share of experiences while at work. She says that she can always hear ghosts banging pots and pans in the kitchen when no living people are in the room.

She also tells of a ghost that resides on the second floor, and that he likes to keep to himself, avoiding contact with visitors if possible.

“He enjoys locking himself inside the rooms, he even puts the security chain on. He locks the windows from the inside… we have a hard time getting into the rooms sometimes!”

Other manifestations are believed to be a result of the photos and memorabilia that are on display throughout the hotel. These include photos of the movie stars that once found lodging at the hotel, as well as a few specific places from the past.

There is a room in the hotel named after John Wayne, and this room is host to countless reports of strange activity. Some visitors even report seeing the actor walking across the front parking lot dressed in a period-western outfit as if he is on his way to a film set.

The Bridal Suite is also a hotel hotspot and is considered the most active room in the entire hotel. Reports tell of a female apparition that likes the go through the belongings of guests, especially female visitors. Clothing has been known to defy gravity and stand on its own as if someone is holding it up to see what it would look like donned on them. The door to the bridal suite also opens and closes itself.

In the rooms that neighbor the bridal suite, guests report objects that move on their own, lights go on and off at random, and the TV will change channels on its own.

Some rooms that were once popular among movie crew members or film actors are known to offer a special ‘wake up call,’ when the curtains fly open at the crack of dawn on their own! A spirit in room 506 enjoys opening the drapes to wake up whoever is sleeping.

The balcony and lobby are also ghostly hotspots, with full-bodied apparitions, disembodied laughing, talking, and footsteps that have all been reported by staff and guests. Unexplained cold spots, darting shadows, and hushed conversation in an otherwise empty lobby are also commonplace.

The hotel has even seen the likes of the famous ghost investigation team ‘Ghost Adventures,’ where they came across strange, satanic markings in the ‘bunk house’ that is adjacent to the hotel. Evidence of illegal gambling, prostitution, and drugs was also found in the underground tunnels that run underneath the hotel.

They even discovered a horrific crime that occurred right behind the hotel that the staff didn’t know about. A murder. On January 21st, 1945, El Rancho bellhop Willie Davis took another bellhop, Ben Harris out behind the hotel and shot him eight times with a .22 caliber revolver. Could some of the new activity be caused by this discovery?

El Rancho Hotel is open for business and the spirits of the hotel are waiting for you to book your stay. Spend a night in the John Wayne suite and maybe you’ll catch a glimpse of the famous cowboy — or perhaps the bridal suite is more your style, where you can swap closets with the ghostly fashionista that resides there. Whatever your intention, the El Rancho Hotel is a wild west cornerstone, and the Hollywood history and spiritual happenings are sure to delight, surprise, and terrify you!