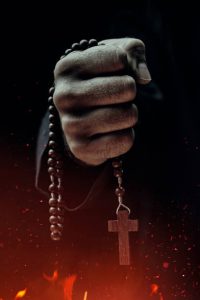 One day, in 1906 at St. Michael’s mission school in Natal, South Africa, Father Erasmus Horner heard of a troubling confession from one of the Catholic students who attended the school, Clara Germana Cele – she’d made a pact with the devil himself.

True stories of exorcism are incredibly harrowing. Those that are possessed and live to tell about it are never the same once they’re freed from the claws of the demon that afflicts them. Clara’s story is just one of many who allegedly made a pact with the devil and lived to tell about it.

Born in 1890 in South Africa, Clara Germana Cele was a devout Christian girl, who in 1906, was believed to be possessed by a powerful demon. Clara was orphaned by her parents as an infant and had attended the Catholic school since she was four years old. Not much is known about Clara’s childhood, but she was raised in the arms of the nuns at the school, she was raised by the church.

Baptized as a child, the only life she knew was that of St. Michael’s Mission. She was known by her peers and the nuns at the school as an ordinary girl, she gave no reason for suspicion of possession.

While her confession wasn’t taken too seriously, her strange and erratic behavior began to worry the priests and nuns at the school. Her behavior came to a head on August 20th, 1906 when the startled students and nuns at the school saw her tear her clothes, growl like an animal, and have conversations with unseen entities. At one point, she even said

“Sister, please call Father Erasmus, I must confess and tell everything. But quick, quick, or Satan will kill me, he has me in his power! Nothing is blessed with me, I have thrown away all of the medals you gave me.”

Later, she stated “…you have betrayed me, you have promised me days of glory but now you treat me cruelly.” Could this last statement be to the devil, who promised Clara power and happiness but received torture instead? The was reported to be the case, as after she confessed to Father Horner about her pact, she got into a verbal argument with the demon inside of her.

In regards to the animalistic growling coming from Clara, one nun wrote,

“No animal had ever made such sounds. Neither the lions of East Africa nor the angry bulls. At times, it sounded like a veritable herd of wild beasts orchestrated by Satan had formed a hellish choir.”

Clara’s strange outbursts continued on for weeks. Nuns reported that her skin would burn when sprinkled with holy water, and she would lash out when bibles, crosses, and other sacred objects entered the room with her, even when they were concealed from her sight.

She also developed what was described as ‘clairvoyant abilities,’ where she was able to describe in detail the personal lives of those around her. Several nuns also came forward stating that Clara had learned to speak and understand several foreign languages in which she had never been taught. She also possessed inhuman strength, overpowering even the strongest priest when they attempted to restrain her during these outbursts.

Another report, told by many witnesses, was that Clara began to levitate five feet in the air on a daily basis, her clothes sticking to her body as she rose, defying the laws of gravity.

It was reported that only after she was doused with holy water would she be brought back down and temporarily snapped out of her possession. Others stated that Clara had the ability to turn into a snake-like creature, her body as flexible as a serpent as she slithered across the floors of the school. She even bit a nun on the arm and left teeth marks that resembled those of a snake’s fangs.

Many stories tell that Clara was completely intolerant of all religious symbols during her possession, but it was reported that Clara not only when to confession while she was possessed, by she also received holy communion. Either this occurred very early on during her possession, or the forces afflicting her were so strong that they were able to withstand the power of the Catholic Church.

Anyone could see that the girl was afflicted by something dangerous and dark. Father Horner and another priest, Reverend Mansueti were cleared by the church to perform an exorcism on Clara. On September 11th, 1906, the exorcism was performed, lasting from early morning until the later hours of the night — a grueling process for both priests. During the exorcism, Clara’s violent behaviors intensified, and she even tried to strangle one of the priests with his stole.

The next morning, the rites were given again, with the possessing demon departing Clara’s body after telling the priests that he would signify his exit with an act of levitation. Clara rose five feet into the air, as she had before. This levitation occurred in front of an audience of around 170 people at the chapel. The priests then said that Clara had been cleared of the Devil’s influence.

Just a year later, Clara claimed that she had made yet another pact with the devil, and another exorcism was performed that lasted two days. After the demon departed the young girl’s body this time, witnesses reported an extremely foul smell filling the air. This was the last time that any disturbances were reported in regards to Clara, as no record exists as to what became of her in the aftermath. All that was told is that she was extremely embarrassed about her exorcism(s) and hoped that everyone would just forget the insanity of what had occurred at the mission. She asked for forgiveness and dedicated her life to more humble pursuits. Clara was cremated after her death, but it is unknown where her remains are interred.