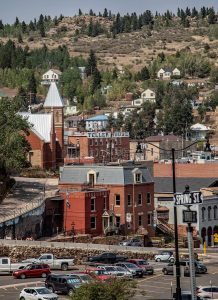 A cemetery straight out of an old western film, the Central City Masonic Cemetery truly fits the scene. Cemeteries are inherently eerie places, but something about the Central City Cemetery is different. Overgrown with desert grasses, the graveyard sits atop a large knoll overlooking the hillsides of Colorado. The grasses are tan, dry, and wiley. Step a few feet into the cemetery itself and one can see why it’s considered one of Colorado’s most haunted.

With its truly outstanding view of Central City, the cemetery was created shortly after gold brought a rush of miners into the area in the early 1860s. With mining comes injury and death, and many of the original miners of the area are buried here in family plots with their loved ones.

Central City was a mining town founded in 1859. This former mining town turned gambling hotspot has welcomed plenty of colorful characters over its history, some of which still reside underneath the hallowed ground. It was lovingly referred to as ‘The Richest Square Mile on Earth,” but its deep well of riches dried up in the late 1800s.

On May 6th, 1859, during the Pike’s Peak Gold Rush, John H. Gregory found a gold vein in Gregory Gulch between the towns of Black Hawk and Central City. Within two months, other veins were being discovered nearby, and by 1860, almost 10,000 people had flocked to the towns in search of their own payday. The 1900 census showed a population of just over 3,100 residents. The year 1863 brought upon union fights, where shootings were occurring regularly. Gold mining in the Central City district decreased very quickly between 1900 and 1920, the gold veins running dry. Mining was revived in the area is 1930 for a brief period of time, but was again snuffed out during WWII when gold mining was considered ‘nonessential’ to war efforts.

The population of Black Hawk and Central City fell to just a couple hundred by 1950, most of the residents leaving to pursue other prospects and relocating to larger urban areas of Colorado. Now home to roughly 100 (living) residents, Central City is well known for its spirits.

Visitors to the overgrown cemetery reports visions of bright orbs flitting about the gravestones, and the cemetery has even become famous for its own ‘Lady in Black.’ Tradition has it that the grave of John Cameron has been visited annually on the anniversary of the young bachelor’s death, November 1st. A young woman, dressed in black, is said to visit and leave flowers in the pot in front of his headstone. No one knows who this mourning woman is, or who John Cameron was — all that’s for certain is that he is missed. Could he have been a miner that lost his life deep inside the mine shafts? Perhaps this woman is his widow, no longer living, yet visiting her husband in death.

As if the cemetery itself wasn’t enough to put Central City on the map of ‘Most Haunted’ in Colorado, there’s a few other spots around town that have been known to host a few ghouls.

The 1863 house-turned-musuem, known as the Lace House Museum is home to a couple of rather loud spirits. Staff and visitors tell of ghostly laughter at all hours, disembodied footsteps pacing the museum floors, and even a shadow figure that follows guests around during their visit, like a ghostly curator. What truly sends chills down any visitors spine, however, is the demonic growling and giggling that has also been reported during the night in the picturesque Lace House.

There’s even a haunted hotel and casino, the Gilpin. A spectral woman named Lucille is said to call the Gilpin home. So, who is Lucille, exactly? What is her connection with this historic building? During the 1800s, the Gilpin also housed a one-room schoolhouse, where Lucille Malone taught a small group of students. She is now a resident spirit, having committed suicide at the hotel by jumping from the balcony after learning her boyfriend had perished in a freak accident when he was run over by a wagon in front of the hotel. Even though her death was untimely and tragic, Lucille is said to be a harmless haunt, and is seen floating around the hotel’s second-floor restaurant. Paying homage to Lucille, a restaurant inside the hotel is aptly named ‘Lucille Malone’s.’

In one documented story from the 1990s, a man who was living in the hotel at the time experienced lights turning on and off, followed by the sound of pots and pans suddenly falling from the wall downstairs. He credited these noises to Lucille, and was convinced that she was attempting to warn him about a fire that had broken out in the building’s kitchen.

After getting into contact with a visitor to Central City and the Central City Masonic Cemetery in particular, this account was given:

“I had just gotten into town, as part of a ‘haunted roadtrip’ so to speak of the American Southwest and West. I visited a few spots in Colorado, but Central City was truly the creepiest. I don’t scare easy, but walking onto the property of the Masonic Cemetery was like stepping into a portal. The air felt so heavy, reading each headstone felt like it took an eternity, and my heart was racing the entire time I was there. I was taken aback by the overgrown grass covering the names of the dead buried there. I stayed for a few hours, attempting to make contact with the spirits that remain, and just as I thought my efforts were in vain, I ended up with the name Paul. He said he had passed away after falling ill from being in the mines, breathing the dust and dirt. I know nothing else about him, and my research into his name was in vain, as I don’t have a lot to go on.

I ended up staying well past dusk, and let me tell you, the reports of orbs are legitimate. I saw at least 4 floating balls of light on my walk through and cemetery. I wasn’t afraid of them, but they seemed to have minds of their own, floating with purpose. I would definitely visit again, and perhaps get in touch with this Paul gentleman again!”

Central City itself is a ghost town in a different way, home to historic haunts that have echoed through the decades, a reminder of the boom towns that came alongside gold rushes, the true start of the American Dream that we all are so feverishly chasing. Have you ever visited this historic Colorado town? What experiences did you have at the cemetery? If you haven’t visited, we suggest adding this little mining town to your list of ‘must-sees!’