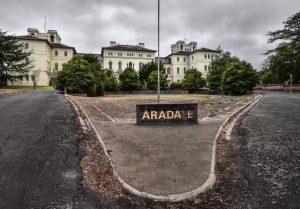 A Haunted Ghost Town Down Under!

Once known as the Ararat Lunatic Asylum, the Aradale Asylum was a psychiatric hospital in Ararat, a rural city in Victoria, Australia. Now considered a ghost town, the Aradale Asylum campus contains over 70 now-abandoned buildings that once housed over 1,000 patients. Aradale and its two sister asylums at Kew and Beechworth were built to accommodate the growing number of patients in need of psychiatric care in Victoria.

Construction of the asylum began in 1864 with the guardhouse being built just a few years later in 1866, even though the list of patients admitted started in 1865. The asylum was designed by G.W. Vivian and John James Clark, Vivian’s assistant. Aradale was designed after the asylums being built at Kew and Beechworth and was the first of the three that were completed.

The asylum was built as a campus, almost like a small village, and contained gardens, orchards, a piggery, a market, and vineyards. As with many asylums of the time, it was meant to be self-sufficient and provide the patients (or inmates, as they were referred to at the time) with labor that was believed to help in their treatments. This is like a lot of asylums built in the United States, which were constructed according to the Kirkbride Plan. One such asylum is the notorious Trans-Allegheny Lunatic Asylum in New York!

At its height, Aradale has over 500 staff members and had close to 70 buildings with the originals being built in the 1860s and the most modern being constructed in 1991. Despite its closure as an asylum in 1993, the facility was used to house female prisoners during the renovation of Dame Phyllis Frost Center.

One distinctive feature of the asylum was the use of ‘ha-ha walls,’ which consisted of a trench on the side of the hospital, and on the other side a flat plane. From the inside, the walls were tall and prevented escape, while from the outside the walls looked low so that passersby didn’t think it looked like a prison.

The decommissioning of Aradale began in the early 1990s and started with transferring patients to other facilities. After the end of the year in 1993, the Ararat Forensic Psychiatry Center was the only site still open. In 1997, the remaining patients were transferred to Rosanna, until a new asylum by the name of the Thomas Embling Hospital was completed.

Today, the site is used for an olive processing facility and wineries, as well as training facilities for Melbourne Polytechnic.

Back when Aradale was in use, the criminally insane were placed in run-of-the-mill prisons, left without the specialized care they needed. The government of Victoria saw the need for a proper care facility and wanted Aradale to be the place that would relieve the prison system of the criminally insane. Soon, it became a place for individuals suffering from mental illness — think postnatal depression, autism, anxiety, depression, PTSD, and Down Syndrome.

This mixture of criminals and members of society who needed Aradale’s special care created conflict and violence at the asylum.

During its 130 years of operation, over 13,000 inmates, patients, and staff members died at the asylum. This left a dark emotional stain on the property that can be seen today. Some locals even swear that Aradale Asylum is the single most haunted location in all of Australia.

While reports exist of apparitions, phantom sounds, visitors experiencing nausea, fainting, and pain, some ghosts from Aradale’s past have made themselves known to those who are alive today.

George Fiddimont was the last Governor of the gaol. In 1886, George was showing a group of people around the asylum when they started down a set of stairs. Suddenly, George falls to his knees, suffering a major heart attack. He died on the spot. These days, tour guides and visitors hear heavy footsteps and banging on that same stairwell, but when they go to take a look, no one is there.

Gary Webb was a career criminal and had a long rap sheet when he was finally taken into custody and sent to stay at Aradale. The crime that sent him to Aradale happened when he was in the process of robbing a pizza shop. He spotted a police officer and instead of getting caught, he decided to shoot the officer. The man survived, and Webb was caught. He was sentenced to 14 years in prison and was told that with good behavior, he may be out earlier than that.

Gary got comfortable at Aradale and started to write letters to the media telling them the inhuman and horrible things he was planning to do once he got out. Citizens began to worry, and a special law was passed to keep him contained at Aradale for the rest of his life. Gary started to self-mutilate at this time and was hospitalized over 70 times. He even castrated himself three times during his sentence. Today, Gary is said to haunt his former room, screaming at visitors to get out and pushing them out the door.

Visitors to the asylum who happen to walk past the office of the former Superintendent report a sudden bitter taste in their mouth. A strange sensation, indeed. But according to reports, the Superintendent became distraught in his life and committed suicide in his office after swallowing cyanide. This is thought to be a man named Dr. William L. Mullen, who died in 1912.

The Ghost of the Women’s Ward

The entirety of the women’s ward is haunted by a ghost named Nurse Kerry. She is said to watch over the tour guides. Her apparition, as well as others, have been seen in the women’s ward donning old-time nurse’s uniforms and disappearing into stone walls. Others report a tingling sensation in their head when they enter what used to be the shock therapy room. Coincidence? Perhaps not.

In J Ward, visitors report feeling ill and suddenly afraid. Others slip into a trance, only released from it when they exit the building. Some people have even been bitten or pushed while walking through J Ward. The ward is also said to be haunted by three prisoners who were hanged and buried on the property. They are said to be restless because they weren’t given a proper burial, and their graves are only marked with three scratches on the prison wall.

Today, tours are offered at Aradale Asylum. So, if you’re ever in the land down under, it would be worth it to check out the old hospital campus and experience the hauntings for yourself. If traveling to Australia isn’t in the books for you, book a domestic ghost tour in one of America’s haunted cities at https://usghostadventures.com