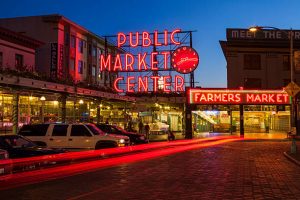 Pike Place is home to a large variety of shops, vendors, goods, and ghosts. A plethora of entities have a strong connection with the area. Pike Place Market is the centerpiece of Seattle’s seventeen-acre historic district. Like many other cities, Seattle has renovated its historic section, breathing new life into the area and giving locals and tourists alike the chance to revel in the beauty that is history.

Pike Place Market has remained one of Seattle’s most popular destinations and brings great revenue and charm to the city. More than six hundred small business vendors operate out of ‘The Market,’ as it’s known to locals. Fresh fruit, fish, herbs, and more are bought and sold here, as well as flowers, books, arts and crafts, and even Seattle souvenirs. — you can find just about anything at Pike Place, including a haunt or two! Looking to meet the ghosts of Seattle for yourself? Why not join us for a Seattle ghost tour?

To understand the market, we’ve got to take you back into the history of the area. Let’s dive in.

In 1907, the Seattle City Council brought the Pike Place Market into being. It was constructed on a newly built four-block boardwalk along the waterfront — it was known as Pike Place. About a dozen or so farmers and vendors set up at the market and soon found that people were eager to buy their wares. The land the market lies on was considered sacred by the Duwamish native people, but without the power and influence of the council, the market was constructed anyways.

The first building was erected in 1907 by a landowner named Frank Goodwin. He made his fortune selling Klondike gold (for an Alaskan haunt, check out our article about the Alaskan Hotel here) In his first ten years of business at Pike Place, a number of multi-story buildings were finished, most of which make up the market to this day.

Because of its famously reasonable prices, Pike Place flourished during the Great Depression. In the late 1930s, a number of other local businesses were built into the market. These included hotels, restaurants, and even theaters. The city boasted about its market, and Pike Place was soon called ‘The Finest Public Market in the World.’

Even wartime couldn’t stop Pike Place, and during WWII the market thrived. However, during the 1940s and 50s, newer suburban markets began to take hold and stole a chunk of business away from Pike Place. In the late 1960s, Pike Place was breaking even due to loyal customers of small businesses. However, the buildings of the market started to show their age, and Pike Place began to face its fate.

But thankfully, a Seattle architect formed a group dedicated to rescuing the market, and they started a campaign known as ‘Save The Market’ Through their efforts, the voters of Seattle decided to establish a 17-acre historic section of the town, and renovated, repaired, and managed the market’s main buildings. Thanks to their hard work, the Pike Place Market still stands today and is enjoyed by visitors from all over — some of which decided to never leave!

As with many other well-loved establishments, Pike Place Market is home to entities that loved it during their time in the physical realm. One of these people was Chief Seattle’s oldest daughter, Kickisomlo. In 1855, the Duwamish native tribe was told to leave Seattle and go to a reservation. Kickisomlo refused, and she built her home in the form of a beautiful waterfront cabin between Pike and Pine Streets. She made a living doing laundry and selling her hand-woven baskets.

When she passed away in 1896, residents of Seattle gave her an honorable funeral and buried her in a coffin in the shape of a canoe at Lake View Cemetery. Many visitors today report seeing Kickisomlo wandering about the market and the surrounding areas. She loved this place in life and surely loves it after death.

She’s been witnessed going about her business carrying baskets and looking into the windows of other shops. Her father predicted that long after his tribe disappeared from Seattle, the spirits would remain. She appears to visitors as a completely solid form, gliding along and going through walls.

Another manifestation at the market is that of an unknown young man. He’s described as being very tall. He’s been seeing peeking from the window of the Vitium Capitale Restaurant. Some have even heard his footsteps in the empty selling spaces and the Left Bank Books Store.

Another haunt is the ghost of a woman who fell to her death through the floor of a balcony at the market. It’s said that when a human life ends suddenly and tragically, the spirit sometimes refuses to move on.

These entities aren’t alone, however. The spirit of a very young child has been seen running around the Bead Emporium Store only to vanish into thin air when they are spotted. The apparitions of a dancer, a man who used to work at the market, as well as another Native American woman have all been witnessed on multiple occasions at the market.

Locals and visitors alike say yes. While Kickisomlo wasn’t allowed her own stall at the Pike Place Market, people believe that she visits the market after death, perhaps living out her dream of selling her beautiful baskets inside. As for the others, there’s no telling why they stuck around, but a quick meander through the market surely gives a few good reasons. Like a paused historical clock, Pike Place Market is a Seattle crown jewel and a haunting unlike any other across America.

Want to know more about the hauntings of the United States? Check out our blog here for weekly articles on all of the most haunted hotspots across the nation!