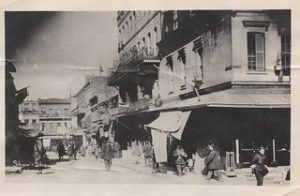 When you hear of the Bubonic Plague, images of medieval peasants come to mind. After all, the Black Death killed off one-third of the population of Europe in the mid-1400s. Seldom if ever, does the Golden Gate Bridge come to mind? But did you know this plague also visited California at the turn of the 20th century? The San Francisco Plague of 1900 to 1904 was the first plague epidemic in the continental United States. While not killing as many as the Black Death visitation during the Middle Ages, a death toll was exacted by this pestilence nonetheless, and ghostly indications are a haunting reminder of this time of plague in the City by the Bay.  To book a tour of this historic city, visit US Ghost Adventures.

The Source of the Disease

Furry forest friend or demonic bringer of pestilence? The California ground squirrel was one of the vectors —or carriers of the flea that carried the plague— that sickened and killed many. 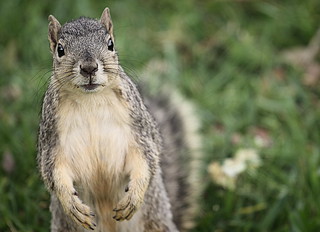 The unassuming California ground squirrel has been identified as a carrier of the flea that spread the disease. The fleas then migrated to rats. As Chinatown was a crowded section of San Francisco at this time, rife with an exorbitant rodent population due to a lack of an adequate sanitation system, this area was hit hardest. However, the Asian population living there succumbed to the plague and were targets of a misinformed and baffled public.

Symptoms of the Bubonic Plague

The symptoms of plague exposure are the stuff of nightmares. The infected person would develop an alarmingly high fever within hours to just a few days. As the virus ravished the body, the infected would become delirious. So, painfully swollen lymph nodes called buboes from which the disease derived its name would form on the body, often bursting and spilling viral blood and pus into the air. Soon after this, many of those infected would die. By the end of the plague, over 120 people were dead. While that is not an astounding number compared to the 25 million people who died of the plague in Europe during the Middle Ages, it was enough to manifest ghosts into our reality as a reminder of those times.

On March 6, 1900, Wong Chut King, a Chinese immigrant, was the first diagnosed case of bubonic plague. Because the first case came from a Chinatown resident, the city cracked down and cordoned off the nearly 20,000 residents of Chinatown, devastating local businesses. The Chinese-immigrant community bore the brunt of these racist health and safety measures. Homes were ransacked, belongings were burned to fumigate the area, and the city’s anti-infection posse looted shops and took sledgehammers to windows. Health officials also gave Chinatown residents a crude vaccine with awful side effects, including shooting pains all over the body and arm numbness. Still, they didn’t administer this drug to white San Franciscans. In this milieu of confusion, pain, suffering, and disease, ghosts became embedded into the very fabric of San Francisco.

Chinatown visitors have witnessed ghosts wandering the streets, many with white clothes covering their faces. Others have reported vacuous figures of people milling about, clustered near locations of the quarantine, such as Portsmouth Square, where the infected were barricaded in a very confined area, and Grant Street, where the first victim died. Their agony has left an indelible mark on the countenance of San Fran.

The Worst Part of the Plague—Racism

The plague crackdown involved forcible quarantine followed by a pattern of anti-Asian racism seen throughout the U.S. but rampant in San Francisco. Newspapers regularly featured anti-Asian cartoons that blamed this group for the virus. Suffering was not alleviated but made worse by such hatred and misunderstandings. Because of this racial propaganda, many died in despair without any humanity being shown to them, their lives coming to an end in places that were called a “death house,” a communal space where no treatment was given, but bodies were easily gathered after death. One such spot was a place named Cameron House, and to this day, cries and moans are still heard and even recorded as Electronic Voice Phenomena (EVP). These residual reminders only hint at the hopelessness these individuals felt at the end of life.

A Light in the Darkness 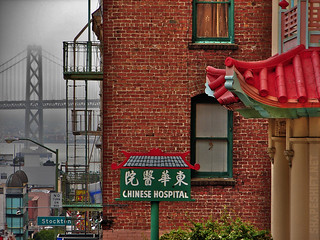 This hospital is still haunted by the ghost of the plague. Source.

The one place that did attempt to care for those afflicted with the plague was The Tung Wah Dispensary. The Dispensary was an emergency hospital funded by the Chinese consul and staffed with Western physicians and traditional Chinese herbalists. Most hospitals in San Francisco wouldn’t take Chinese patients at the time of the plague outbreak. Tung Wah gave the people of Chinatown care and relief in a comfortable environment. The building is now named Chinese Hospital, located at 835 Jackson Street. Specific energy emanates from this building, a haven of hope in an otherwise uncaring world. Ghosts have been reported within these walls. Of course, this wasn’t a pleasant place to be—it was a plague hospital, after all! But rest assured, the past is not tormenting these remaining souls. They linger here because they feel safe and cared for. Here, they were treated as humans.

The Fading Shadow of the Black Death

Health authorities embarked on an ambitious public sanitation campaign to clean up city trash to keep the rats away in Chinatown. Trash collection was initiated, and civic hygiene was stressed to combat pestilence. Following that public health campaign, the last bubonic plague case was diagnosed in 1908.

San Francisco’s Chinatown today is a diverse community with a strong Asian heritage. Through plague and hatred, the district refused to succumb and, a little over a century later, has become a pinnacle of the community.

When visiting this culturally rich area, remember the brave men and women who overcame such hardships and oppression that have left such a poignant mark on this city. Keep an eye open; there might be a ghost or two that will also remind you of the events of the past that made Chinatown what it is today.