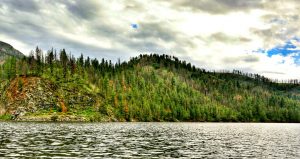 Bonito Lake was once Bonito City, back in 1885 when the city was filled with outlaws, murders, and massacre. Before it was demolished and hidden away with thousands of gallons of water, Bonito City was no stranger to bloody confrontations and tragic endings.

A prosperous family was nearly wiped out over scorned love, an interrupted theft that left eight dead, happenings like these set a truly high standard for violence, when during those ‘wild west’ days of New Mexico’s history.

Bonito City began as a tent-filled mining camp in the 1870s during the gold rush. By 1882, it was populated with janky log cabins on both sides of Bonito Canyon. Some of the earliest families in the area were the Zumwalts, the Skinners, and the Bournes.

Supplies to the city were hauled in by wagon at that time, a mule guiding the residents’ food source carefully over precarious cliffs and across dry plains all the way from Las Vegas or from the trading posts at White Oaks and Lincoln.

The town was starting to prosper and even boasted a saloon run by Peter Nelson, a school, a general store, a post office, many log and plaster homes, tent lodgings, and even a two-story boarding house operated by Mr. and Mrs. W.F. Mayberry — who would soon be involved in one of the most grisly crimes in Bonito City.

The couple had three children, Johnny, Eddy, and Nellie. The murders began in the early morning hours of May 5th, 1885 before the sun rose. A quiet and not-so-well-liked laborer named Martin Nelson, spurred by greed and madness, gunned down four members of the Mayberry family as well as three other bystanders.

Nelson was a miner who came into town looking to get rich, just like everyone else. Most people in town saw him as a drifter who was up to no good, however. Following his arrival, a wave of thefts occurred and his reputation was cemented.

Several historical articles were written about the massacre, but details vary on the motive. Some say Nelson was jealous of the family’s success — others say he was madly in love with Mrs. Mayberry and lost his mind.

One of the earliest versions of the murders was written in a booklet titled ‘Mayberry Murder Mystery of Bonito City.’ It was written in 1938 by a man named A.L. Burke.

Burke wrote that his account came from John H. Skinner, the only surviving witness to the crimes. Burke speculated that Nelson lost it around 1 in the morning, and headed towards the upstairs bedroom shared by the two Mayberry brothers. He knocked softly and Johnny answered, met with the end of a .38 caliber rifle. He beat Johnny with the butt of the gun as he tried to resist, shooting him again in the process. Eddy was next, who was shot and killed as he sat up in bed.

When a hotel guest rushed to their aid, he was shot in the head and his body was thrown atop those of the boys. Mayberry himself was making his way from his bedroom when Nelson shot him in the heart. He then turned his weapon on the youngest Mayberry, Nellie. Mrs. Mayberry was the last of the family to die, shot in the chest, and left for dead.

Burke wrote that the occupants of a nearby cabin were too afraid to open their door to Mrs. Mayberry as she made her way outside, leaving a trail of bloody footprints behind her. Martin followed her and killed her, throwing her into an irrigation ditch.

Peter Nelson, the saloon owner and not at all related to the murderer, ran from his bar and tried to wrestle the rifle out of the hands of this madman. He was also shot and killed.

Nelson then turned his rifle on a man named Herman Beck, who had opened the door of his grocery to see what all the noise was.

Each story ends with Nelson being shot and killed by an onlooker.

Regardless of the slightly differing accounts, many people perished that day at the hands of Nelson. One account even says that Nellie was spared by Nelson but only after she promised to watch when they hanged him.

According to Burke, the morning after the shootings, the seven victims were laid out in a row in Pete Nelson’s saloon. The killer’s body was laid in another. The Mayberry’s and Nelson were buried on the hill outside of Bonito City. According to local legend, Nelson was buried head first to ensure that his spirit would not rise and walk the earth.

‘The violence, the blood, the macabre scenario that will forever haunt that beautiful lake is difficult to comprehend.’

For the next 15 years, the Mayberry Hotel stood empty as a reminder of the bloodbath. It was then that it was considered haunted — the bloody footprints were said to still be visible and that muffled shots could be heard coming from the hotel.

When the town was dismantled about forty-five years later, the remains of the victims were moved to the cemetery at Angus. Even though their bodies had been relocated, it is said that their spirits remain where their beloved town once stood. 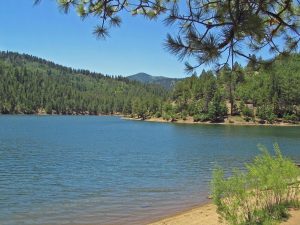 Such a tranquil setting — it’s hard to believe the horrors that happened a century ago beneath the water. Source: Vecteezy

Sitting in Lincoln National Forest is a placid and peaceful reservoir. Bonito Lake is a popular place to go to enjoy the outdoors and has been a favorite since it was filled up.

However, it’s not all fun and games at this recreational lake. Most say the entire area, including the water, is teeming with ghosts — including that of a mass murderer.

Many believe that the ghost of Nelson himself haunts the reservoir, lurking about the beaches and under the water, pulling people into the depths. As you read earlier, only the victims’ remains were moved to another location —  most believe that Nelson’s body remained buried at Bonito Lake.

Visitors have reported seeing the apparition of a man in period clothing wandering the shores and vanishing. Some have even seen his face floating underwater, watching the world go by from inches below.

Some visitors and locals report hearing disembodied voices and giggling when the shores and water are empty. Perhaps these are the Mayberry children, enjoying the reservoir just as any other kids would.

It’s strange to think that the remains of an entire town lie beneath the murky waters of Bonito Lake — even stranger to think about the entities that are said to still remain there.