Sweetwater Mansion and her Ghosts 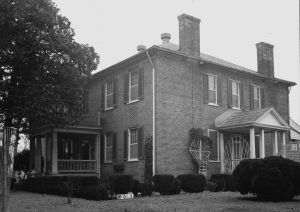 Sweetwater Mansion, also known as the Governor Robert Patton house, is located in Florence, Alabama and is a historic plantation home designed by General John Brahan. The house is almost two hundred years old and has a haunted repertoire to prove it. Sighting of entities and unexplainable events have plagued the house for over a century, with one involving an apparition of a phantom casket with a ghostly corpse inside!

Looking to experience the hauntings of America for yourself? Check out our locations page and see if we offer a historically accurate and hauntingly fun ghost tour in your city!

History of the General and His Mansion

John Brahan was a veteran of the War of 1812 and owned more than four thousand acres of land in eastern Lauderdale County, Alabama — that’s just over 3,000 football fields! The eight-room home was built of bricks that were manufactured on the banks of Sweetwater Creek which lay just below the house. Sweetwater Mansion got its name from this creek, and was first occupied by Brahan’s son-in-law Robert M. Patton, a post-civil war Governor of Alabama, who completed building the beautiful mansion in 1835.

The home was later listed on the National Register of Historic Places in 1976 due to its historic nature and important place in Alabama history.

The mansion’s basement once served as a Civil War makeshift hospital and was even a county jail at one point in history. Weirder still, construction started in the basement in 1828 and it’s in this dank under-dwelling where the Sweetwater Mansion’s ‘Mystery Room’ is located.

While the rest of the mansion’s rooms are normally built, have a known purpose, and a way to enter them, the mystery room gives no answers to these questions. It has no entry, and it can only be seen through one exterior window. What was this room used for? It remains unknown.

It seems as if the entire mansion has mysteries of its own, with reports of hauntings spanning decades.

Several different hauntings have been reported over the years at Sweetwater Mansion. We’ll dive into each of them below.

One report that has come out of Sweetwater came from a caretaker of the home. She reportedly came downstairs only to see a casket appear out of nowhere. Inside the casket was the body of a man in Confederate army garb. She had no idea who this man was but discovered that he may have been one of the General’s sons who perished during the American Civil War — this would make sense, as his funeral was held in Sweetwater Mansion.

There’s also the belief that both of the General’s sons are buried in the floor of the ‘mystery room,’ never to leave the property. It’s also said that when Billy, one of the Patton sons died, his mother Jane Patton was too distraught and destroyed over her son’s death that she didn’t want to bury him — she instead kept his corpse in the now-called ‘mystery room’ in the basement.

Doors are said to lock behind female visitors and staff members, leaving them afraid and unable to get out. It’s believed that this could be the ghost of Billy, playing tricks on women — others believe he does it for a more sinister purpose.

One of the earliest caretakers, Ms. Emmet Lettie Region, got locked in a room which caused her to only be able to work and stay in a few of the rooms that she felt 100% comfortable in.

Stories have surfaced about an apparition of a man dressed in a Confederate uniform patrolling the front outside area of the property.

Other occurrences within the home include doors moving by themselves, as well as a large ceiling tile being ripped from the ceiling and thrown across the room. Other times the sounds of children’s giggles have been heard even if there are no children present at the home.

Perhaps most of the hauntings at the Sweetwater Mansion are due to its tenure as a field hospital and makeshift jail. Or maybe the strange occurrences are perpetuated by Billy, the Confederate son who passed away in the war and is still haunting the home.

Whatever the reason may be, Sweetwater Mansion has lured guests from all across the country with its southern charm, and even moreso with its ghostly energy!