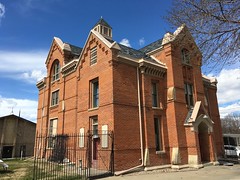 In the realm of ghost investigations, one of the most popular locations to search are penitentiaries, and the Squirrel Cage Jail is no different. Unsavory as it may be, these institutions were designed to separate some of the most violent offenders from society for the sake of the common good. Prisons and jails became repositories for murderers and other heinous offenders, containing not only the inmate but also the accumulation of all the emotions, urges, and violent intentions of those incarcerated. It is little wonder that prisons are so haunted.

But prisons have become rather mundane anymore, with famous penitentiaries such as Alcatraz and Moundsville receiving so many investigators into the paranormal that groups often find themselves tripping over each other during their ghost hunts. However, in a little town not known for a ghostly activity called Council Bluffs, Iowa’s unassuming agricultural state is a unique jail. It is the world’s only three-story rotary jail that is now a unique museum that bears testimony to a bizarre trend in prison design. Let us investigate the Pottawattamie Squirrel Cage Jail.

Join us for a tour at US Ghost Adventures!

The Pottawattamie Jailhouse, better known as the “Squirrel Cage Jail,” is one of only three remaining “rotary jails,” all of which stand as examples of a brief obsession with keeping criminals in rotating cells. Built in 1885, the jail was constructed to minimize the interaction of the jailer and convict by turning the cells around in a kind of penitentiary carousel. The jail was so innovative it was declared a “19th-century marvel.” The basic idea behind the design was that the cells were all located on a central roundabout that would spin at the turning of a hand crank so that only one inmate’s holding area could be accessed at a time through the single entryway. While most of the rotary jails built around this time had only one level of cells, the jail in Council Bluffs was created with three stacked levels of holding cells. The collective effect of the tall cell structure made the jail appear like some cage one might hold a small animal in, hence its popular nickname. While a squirrel may not be the first animal one would think of when you consider a cage, this is Iowa, after all, so just go with it.

This marvel soon experienced problems in its mechanics and design. The Squirrel Cage Jail was deemed a failure just a few years after it opened, as it made a horrible noise as it moved, and its gears kept jamming, risking starving inmates. Because of its rotating design, there was no need for traditional inmate segregation, and all prisoners were kept in close confines in adjacent cells. Therefore, prostitutes were imprisoned next to ax murderers and petty fraudsters next to rapists.

Even worse, the mechanism that made this jail so unique often failed to work properly. Inmates often put their arms and legs out of the bars as the jail rotated, causing ghastly breaks and injuries. In fact, in the 1960s, the mechanics malfunctioned to such an extent that it took two days to reach the body of a dead prisoner who expired in his cell!

But like any prison worth its weight, this place also has its fair share of hauntings. Looking over who was incarcerated here, it is little wonder that this place is haunted! 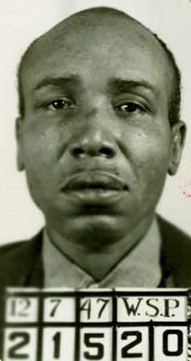 The Squirrel Cage Jail housed mass murderer Jake Bird, a transient who may have killed up to 46 people using either an ax or a hatchet and spent 31 years in jail in Michigan, Iowa, and Utah. At his trial, the killer put the “Jake Bird Hex” on those he saw as involved in punishing him, saying they would die before he did. As the story goes, six people allegedly died, including the judge, who died within a month; the court’s chief clerk; two police officers who took confessions; and the killer’s lawyer, who died on the first anniversary of his sentencing. The bird was hanged in 1949. So if you visit the jail, stay clear of the Jake Bird Hex! 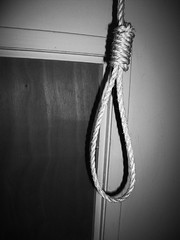 The Hangman’s noose undoubtedly was the cause of a few of the hauntings. Image Source

Squirrel Cage also imprisoned Charles Noel Brown, who went on a three-day drunken murder spree and was eventually the last man hanged in Iowa in 1962. His noose is on display at the Squirrel Cage Jail.

These two more infamous inmates are said to haunt the site, perhaps lingering because this was the place of their execution. However, the Squirrel Cage Jail ghosts could have originated from the other four known deaths in the building. One prisoner fell three stories to his death while trying to carve his name on the ceiling, another hanged himself to escape the deplorable conditions of the jail, one died of a heart attack, and a jail officer was shot and killed accidentally while on duty in the prison. All these deaths, by execution and accident, make this prison the perfect storm for paranormal activity.

Disembodied voices have been heard and recorded within the skeleton of this former prison. Shadow people, black and vacuous anthropomorphic figures, have been said to follow groups touring the place, peeking around corners, and even seen within the cells that used to hold the prisoners. Perhaps one of these figures is the ghost of Jake Bird, stalking his latest victim. Possibly the ghost of Charles Brown manifests in such a way in the building where he was hanged. Or maybe inmates whose names have been forgotten in time still are incarcerated long after their sentence was complete. Footsteps still echo throughout this empty site, and moaning sounds have been reported long after the lights have been turned off. Just like when it was an active prison, this place is still not for the faint of heart.

If you ever find yourself in Iowa and plan on passing through the Council Bluffs area, stop by this unique jail that has been transformed into a museum. But remember, you are standing where people were hung and where serial killers spent their last days. Take a few photos. You never know who you might meet in the Squirrel Cage.