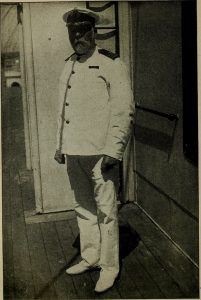 The tragedy of the sinking of the RMS Titanic occurred over a century ago, but the ripples of the disaster are still felt worldwide today. Countless ghost sightings have been reported from the Titanic Museum, which is to be expected — the museum is home to personal items and artifacts from the ship, carrying the energy of those who lost their lives that fateful day. However, a quaint home in Britain has been gaining notoriety due to the increasing sightings of the Titanic’s Captain Edward Smith, who used to call the two-bedroom home during his childhood.

Now, the owners are looking to ‘ship out’ but are having problems scaring up a buyer who isn’t spooked by the fact the Titanic Captain Edward Smith’s ghost lives on!

Join New York Ghosts on a tour of this historic city!

For Captain Smith, commanding the RMS Titanic on its maiden voyage to New York should have been a fitting end to his long, impressive career.

But just four days into its journey, the Titanic struck an iceberg in the Atlantic. The collision caused the Titanic’s hull plates to buckle inwards, opening five of the 16 watertight compartments to the frigid waters of the sea.

Over the next two and a half hours, the ship gradually filled with icy water and sank, sending 1,500 passengers to their deaths.

The Boyhood Home of Edward Smith

Neil and Louise Bronner purchased the childhood home of Captain Smith in the British town of Stoke-on-Trent, knowing the unique connection that the house had with history. It was the boyhood home of Edward John Smith, the Titanic’s Captain, who died alongside 1,500 others when the ship struck an iceberg in 1912.

Smith was believed to have lived in the home with his parents for more than ten years before heading off to the open sea when he was thirteen.

The home was built in the early 19th century and was used as a corner shop by Captain Smith’s mother.

They’ve rented the home for over a decade and have heard their fair share of stories from their tenants. Some have reported feeling unexplainable cold chills in the home, ‘as cold as an iceberg,’ some stated.

Another tenant claimed to have seen the full-bodied apparition of the Captain when he was at home alone one day. He called Neil and explained that he saw a man in a naval uniform walking around the home’s kitchen. 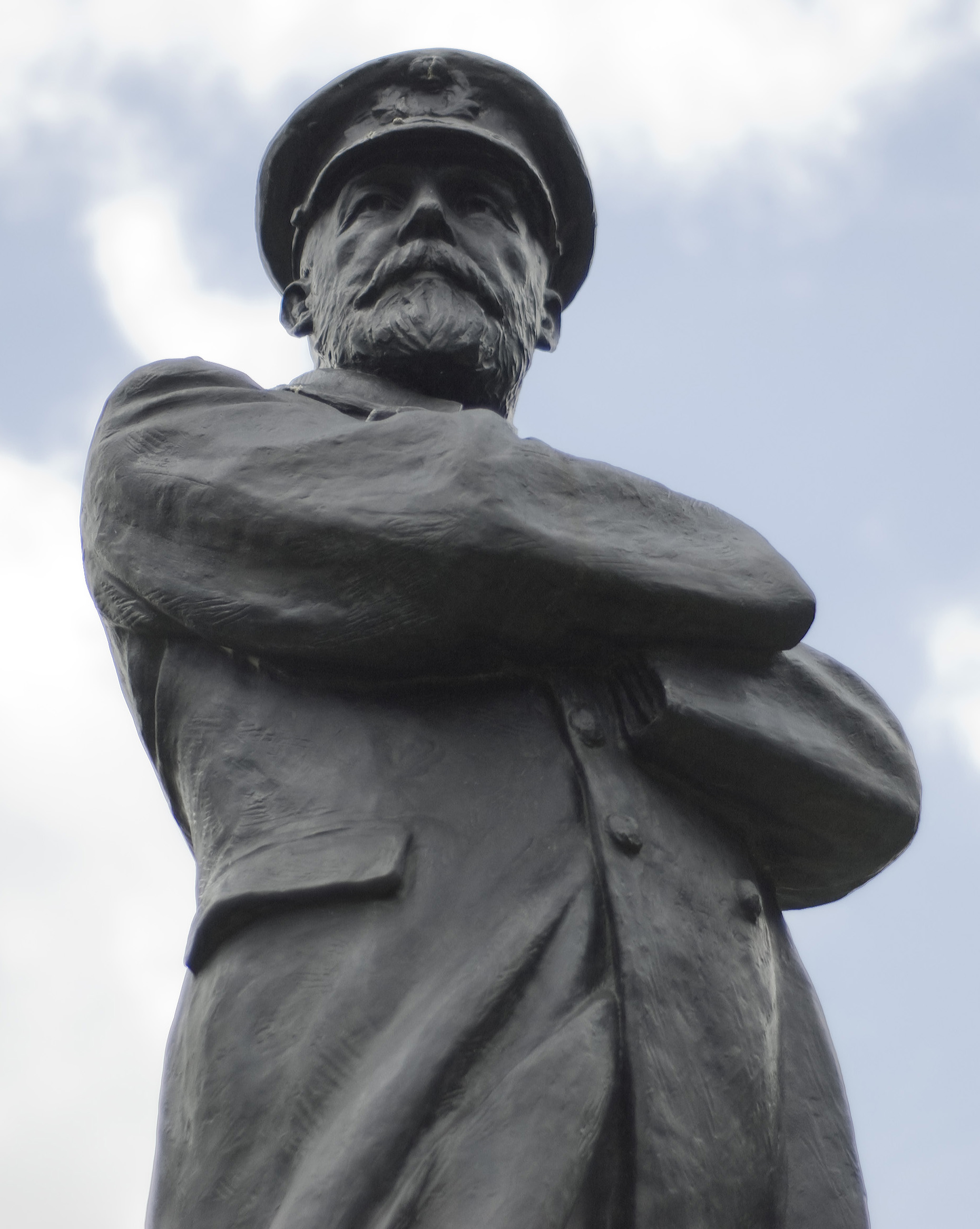 The British home isn’t the only place that the Titanic’s Captain has been spotted recently, either… he’s also reportedly been seen in Baltimore, Maryland, by a retired mariner who claims to have seen the phantom Captain for over 17 years all around the city.

A statement has been made that Captain Smith was not drowned in the disaster but has been seen safe and sound in Baltimore. Peter Pryal was a Quartermaster on the steamship Majestic over 30 years ago when Captain Smith commanded the Titanic.

Mr. Pryal said that he saw the Captain on a Wednesday morning, and to confirm it was him, he went to the same spot that Friday and saw the Captain again. Mr. Pryal was shocked — everyone believed the Captain to be long-dead — so much so that he returned home before he suffered a nervous breakdown in public.

At 9 o’clock that fateful Friday morning, he went to the corner of St. Paul and Baltimore Streets and stood on the corner for almost an hour. To his astonishment, he saw the same man approaching him — he said, ‘Captain Smith, how are you?‘ The mystery man replied, ‘Very well, but please don’t detain me, I am on business.’ 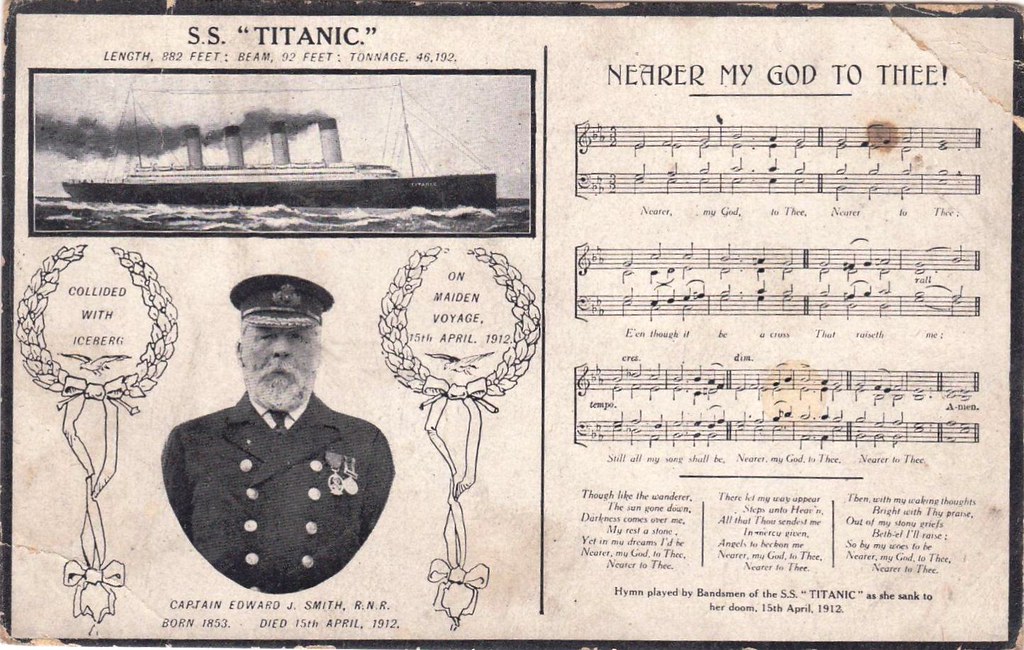 A card of remembrance of the Titanic. Source: Flickr

Mr. Pryal was stunned — he followed the man to St. Paul and Fayette Streets. Several times the supposed Captain turned to see Mr. Pryal following him, and he ducked into the Calvert Building to try to lose him in the crowd.

Mr. Pryal said that he caught up with the Captain as he was boarding a car — the Captain stated then:

‘Be good, shipmate, until we meet again.’

We’re headed back to Europe for the next sighting of the Captain — a Belfast bar, where a couple was left terrified after who they believe to be the ghost of Captain Smith showed up in a photo of them as they enjoyed an evening out.

Cheryl and Luke Arkless noticed something blurry in the background of their photo at the pub packed to the brim with original memorabilia from the infamous voyage.

The photo was snapped by Cheryl’s mother-in-law, who had taken three pictures of them within seconds.

They recall feeling a cold wind against their backs but thought nothing of it at the time — perhaps the old pub just had a bad draft.

It wasn’t until they flew back to England that they looked at the photos and saw something strange.

‘I called my husband and he said it was probably a person walking behind us very fast. But the thing is, everything around us is crystal clear apart from that blur. I was very skeptical at first but now I really think it looks like a man. There is a strong ‘Titanic’ background in the bar, and the more you look at the more he resembles the captain. On the right-hand side behind us, a band was playing, so he looks as if he is watching the band.’

Could the spirit of Captain Smith still be haunting the places with connections to the wreckage of the Titanic? Or, could the Captain have survived the accident? Let us know what you think in the comments!

Captain Smith of the RMS Titanic Seen After His Death: 1912