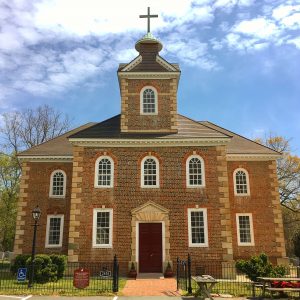 Remnants of colonial America are neatly arranged all across the Eastern seaboard. Landmarks from a time past shaped the time we live in today. None, however, are as unique and stoic as the Aquia Church of Stafford, Virginia. Established in 1667, it is one of the oldest active congregations in not only Stafford count but within the United States. The Aquia Church has seen many changes, tragedies, and turbulence unfold before it. Originally a small wooden church, it was rebuilt in 1751 into the unique, two-story Greek Cross Structure we see today. It was not long before disaster struck, and the building nearly burned to the ground. Its brick encasing being the only remanence of the old structure. It did not reopen until 1757. After this period, violence fell upon the church. Because of it, there have been reports, for nearly 200 years, of a terrified woman roaming the grounds and staring out the chapel windows. Another haunted locale is not too far from the church: the Brent family cemetery, home to the infamous Witches Table. Spiritual residue from Colonial America encircles the greater Washington D.C. area.

Take a tour with DC Ghosts to learn more!

Foundations of The Aquia Church

The Aquia Episcopal Church was established in 1667, three years after the division of Westmoreland county into the Overwharton and Chontak parishes. It was one of three churches built that year. The Potomac Church, the largest in Virginia at the time, and the main county church were also constructed that year. It was a modest wooden building and, by 1700, had burned down in the first of two fires in its long history. A new wooden structure was built in its place, and it officially became a congregation in 1711. Aquia Church was the childhood church of George Mason, one of the three founding fathers who refused to sign the Declaration of Independence. Thomas Jefferson and other founding fathers were among the ranks of Aquia’s congregation. Members also included constituents of the Leedstown Resolutions and The Virginia Statues of Religious Freedom; both would later influence the verbiage of the Declaration of Independence. George Washington’s half-brother and original owner of Mount Vernon, Lawerence Washington, played a key role in the development of the modern structure. In 1745, he petitioned it to be built with money from the Parish, rather than the people’s tax money, by his company Accekok Iron Works. 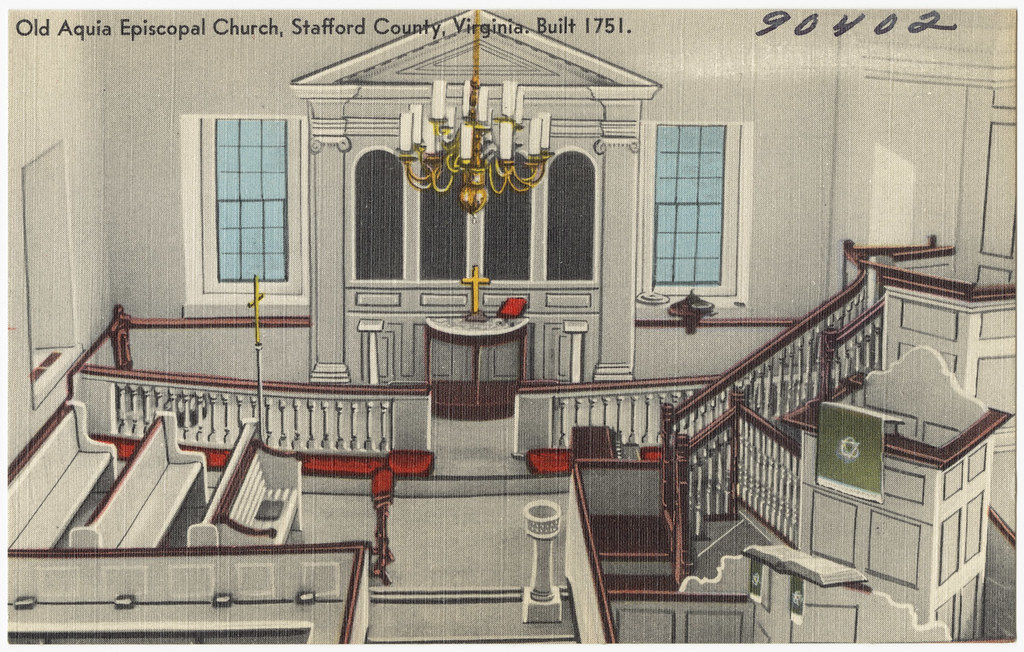 This delayed construction of the badly needed new church. Washington would later die in 1752 after a long battle with Tuberculosis, further delaying construction. In 1751 an architect named Mourning Richards was hired. The Gregorian Greek Cross-styled building, a namesake derived from the aerial view provided by its layout, was finally built. A true rarity in Colonial America. Tragedy would strike in 1755, as a second fire burned the wooden interior of the new church. The carpenters were to blame. After leaving a fire too close to the shavings at night, only the exterior brick walls remained. Richards worked without pay to reconstruct the building and finished it in 1757. The Revolutionary War brought many significant changes to Virginia, and with new ideals came new issues. Church and state became separated, and Aquia Church lost its funding. The building would be abandoned for years to come.

Aquia Church remained empty due to a lack of funding. The splintering of the Protestant church into the various congregations we know today only complicated matters. It was not until 1854 that church finally had enough members and financial support to reopen its doors. The building had remained vacant throughout the years. At least, that is what many believed. Broken windows smiled back at morose Episcopalians, passing by in reminiscent longing for many years. When the congregation returned, an odd stain lay upon the wooden floors, one that would remain for nearly a century. Upon further inspection, the skeleton of a woman, her flowing blonde hair still completely intact upon the skull, was found in the vestry. Alarmed and confused, the congregation buried the mysterious skeleton in the church cemetery. The blood stains would remain on the wooden floorboards until the church received new tile flooring in the 20th century. 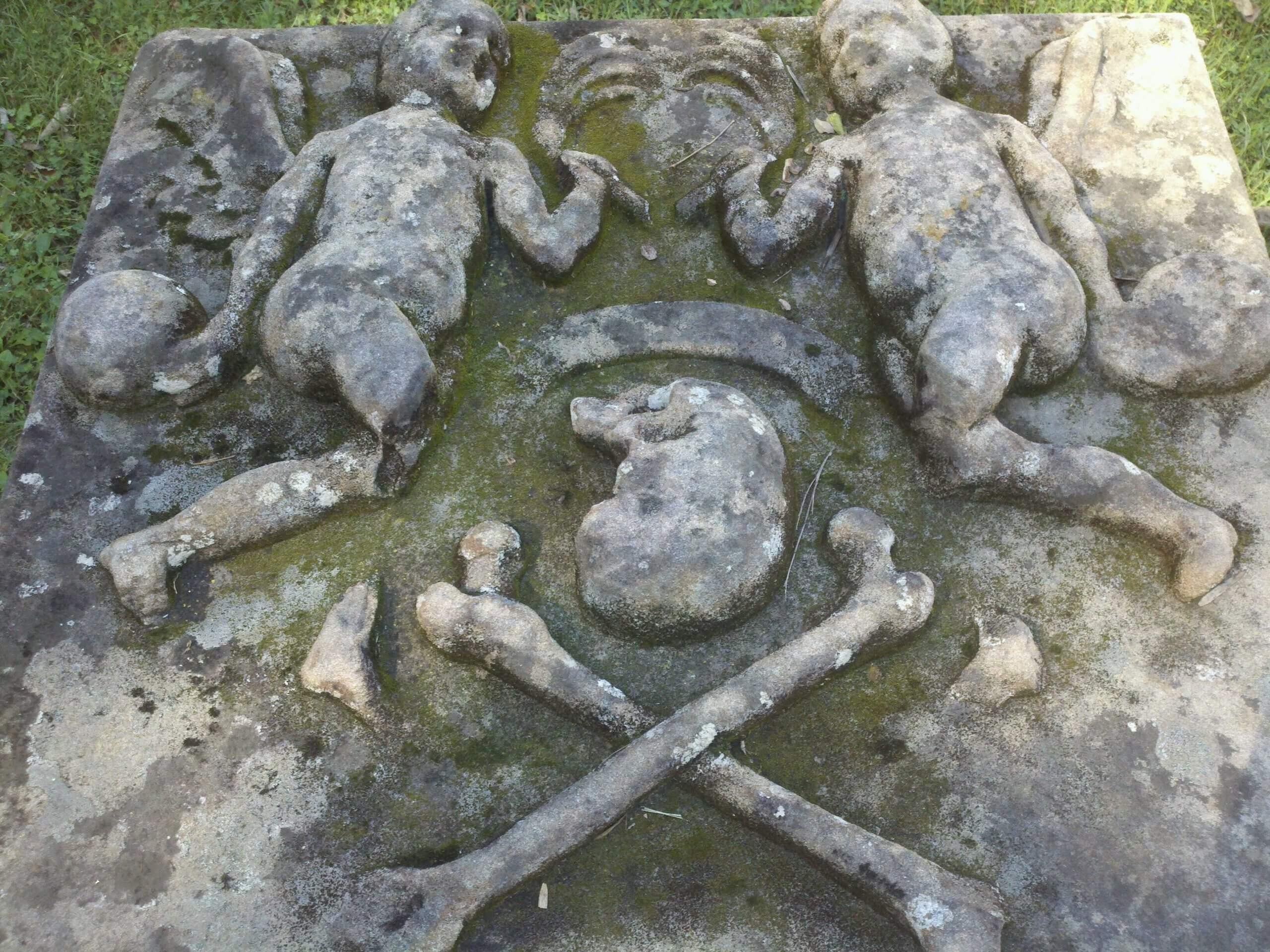 While her body was laid to rest, her spirit remains to this day. No one is certain how she ended up in such a desperate situation, but the folklore goes that two highwaymen accosted her in the period following the Revolutionary War. She fled to the church seeking safety, but her security would be but only fleeting. The men caught up to her and murdered her, hiding her body in the vestry. Since she was discovered, reports of footsteps running and a woman’s scream have been common. Her eternal struggle is played out over and over again for those unlucky enough to witness it on the vestry staircase. Many have seen her, bright blonde hair and all, staring out the second-floor window of the church. By the early 1900s, her appearance was so well known that many churchgoers would not enter at night. In the 1920s, as paranormal interest was peaking in the United States, one woman hired two ghost hunters to enter the building with her. She was slapped across the face by some unseen force. The mark left upon her face lingered for days. 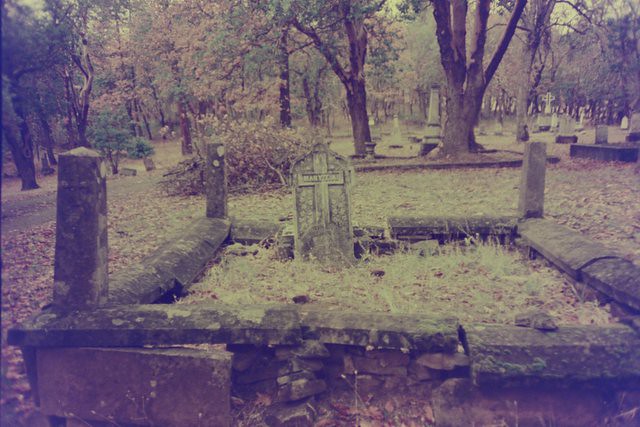 Another Stafford County paranormal point of interest is not too far from the old Aquia Church, right up the creek from which it gained its name. Witches Pond, currently a privately owned plot of land, is the sight of not one but two more gruesome murders. The first is that of a mysterious woman named Edith. It is said she was murdered in the 18th century by colonial villagers after being accused of being a witch. In the spring, when she was killed, the pond turns blood red, and many have seen her hovering above it. A nearby grave, called The Witches Table, was said to be part of sacrificial rituals that took place. Yet, there is no documentation of Edith, her murder, or the table being used as a sacrificial altar. In fact, it is part of an outdoor church of sorts, built in the 1930s. It is used to this day in a Catholic Field Mass to honor the Brents, the first Roman Catholic family to settle the area in 1649 after the English Civil War made Maryland unsafe for them. Margaret Brent is also known for being the first American woman to demand the right to vote. In 1998, a real murder was unveiled, however. A woman’s body was found covered in leaves in the Brent cemetery. Her body, found 400 feet from the pond, had been there for over a year. Her murder and identity remind a cold case to this day. Perhaps she came looking for the illusive witch of the pond and met her end, just as Edith did three hundred years before. That being said, we do not recommend visiting the area as it is private property. Instead, to satiate your paranormal needs, keep reading our blog for more intriguing stories and tales from Colonial America and beyond!