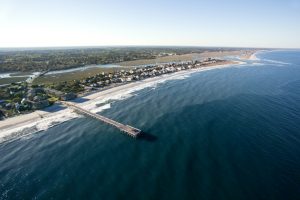 South Carolina is home to more than a few haunted hotspots, like ghastly hotels and otherworldly bridges. The Palmetto State usually surprises visitors with its variety in haunts, and one location seems to do a ridiculously good job at scaring the unsuspecting.

The island is scant when it comes to living residents, and has a year-round population of just 100 people. The tiny resort town comes alive in the busy season, hosting tourists from all over the country looking to escape their 9-5s and concrete jungles. As one of the oldest vacation spots on the east coast, Pawleys Island’s long history may explain the immense amount of hauntings and apparitions reported there, such as a lovetorn maiden, and a ‘Grey Man’ who wanders the coastline.

Ready to dive in? Read on to learn all about the haunting history of the island and if you’re looking to get real up-close and personal with the ghosts of America, check out our locations page here and see if we offer a ghost tour in your city!

Pawleys Island is a small town in Georgetown County, South Carolina. The population has dwindled since 2010 and now sits at just 103 residents. The earliest known inhabitants of the area were Waccamaw and Winyah people, two Native American tribes who’s history dates back over ten-thousand years. Archaeological sites have been uncovered in the area. The first Europeans arrived to the area from Spain in 1521. Colonization had a devastating impact on the Waccamaw and Winyah people, and many of them perished from disease or were captured and enslaved. While the Winyah people has disappeared by 1720, the Waccamaw and their rich culture still exist in South Carolina today.

Pawleys Island’s history as a beach resort began all the way back in the early 1700s. George Pawley, who the town is named after, inherited the island through a land grant to his father. In 1791, George Washington — yes, the George Washington toured the Grand Strand, traveling King’s Highway to an unincorporated part of the island.

The island itself bans any commercial or industrial buildings with the exception of a condo complex from the 1970s and a few grandfathered inns. The island is even listed on the National Register of Historic Places, securing its spot in American history.

Ready to take a deep dive into the most infamous haunts of the island?

Alice Flagg was born into an upper-class family along the coast of South Carolina in the early 19th century. She was in love with a man who was in a social class deemed unacceptable for her. Her brother disapproved of her choice in love, and demanded that she end the romance at once. Alice defied her brother and continued to see her beau, even agreeing to an engagement.

She hid the ring on a ribbon around her neck, but soon her love was discovered and she was sent to a boarding school in Charleston to keep her away from her intended husband. There, she fell ill will malaria, and she was rushed back to her family. As she lay in her bed, her brothers discovered the ring and ripped it from her, throwing it across the room.

After this, she became sicker and sicker, compounded by her disease and the sorrow she felt when she knew her beloved would never be hers. She spent her last days begging for those around her to find the ring, but it was never recovered.

She soon died. Alice was dressed in her favorite white dress and was buried in the Flagg family lot at All Saints Cemetery near Pawleys Island. A marble slab rests atop her grave.

These days, people visit Alice’s grave, bringing her gorgeous floral arrangements and tokens of remembrance. These gifts are intended to sooth her heartsick soul. Alice’s apparition has been spotted at the front door of the Flagg home, the Hermitage. Others claim to see her in the graveyard where she is buried, but one detail remains the same — she seems to be searching for something with her hand tightly clasped to her chest.

The Grey Man is an infamous ghost who resides on Pawleys Island. He’s said to have wandered the coastline for nearly two-hundred years. His presence is believed to warn of hurricanes and other dangers from the sea.

The most common origin story of the Grey Man is that in 1822, a young woman was staying on the island with her family when she received word that her loving fiance was going to come and join them there. She was absolutely delighted with the news, preparing all of his favorite foods and setting him up a bedroom.

However, as most of these stories go, plans changed. On his way to the island he had challenged a few of his servants to a race on their horses. As they raced he saw a shortcut through a marsh and decided he would take it. His horse stumbled in the tepid, moist ground and he was thrown off. Despite his servant’s efforts, he sank down into the mud and essentially suffocated.

The news of her fiance’s death nearly drove the woman mad, and she had visions of him day and night. Her parents were more than concerned with their daughter’s hallucinations, and decided to take her to Charleston to see a doctor immediately.

Within hours of leaving the island, a hurricane hit the coast and destroyed most of the island, leaving almost all of Pawleys Island’s residents dead.

These days, locals and visitors alike know to get far away from the beach when they see this gloomy apparition. People claim to have seen the Grey Man before Hurricane Hazel in 1954, prior to Hurricane Hugo in 1989, and again in 2018 before Hurricane Florence made landfall. Coincidence? We don’t think so.

Pawleys Island not only provides visitors with the best in small-town vibes, great seafood, and memorable beach trips, but it also brings a more mysterious memory to the table with its hauntings. Have you even been to Pawleys Island? Did you encounter Alice or see the Grey Man and live to tell the tale?

For more hauntings all across the United States, check out our blog!