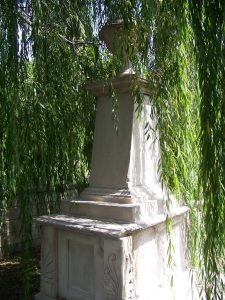 Music City. Nashville, Tennessee. The home of the Grand Ole Opry, countless country classics, and those well-sought specialty Hot Wings that keep the city’s name and character in such high regard. However, many do not know that a cemetery lies beyond the oily veneer of Broadway Street. In its unrivaled grace, the Nashville City Cemetery has kept the city’s founders, bricklayers, and soldiers in eternal peace. With over 20,000 interments since opening on January 1st, 1822, the Nashville City Cemetery has kept the city’s history alive and in reverence for 200 hundred years. However, not every occupant of the cemetery has remained at peace. Spiritual activity at the cemetery is often reported and witnessed by visitors. One particular grave, “Suicide Rock,” has attracted visitors far and wide with a tale of young love cut short. Retold for generations throughout the city. Some claim the story to be misconstrued and that no such spirit exists. As always, we have set out to discover the truth within the unknown. If you are so intrigued, perhaps consider taking a tour with US Ghost Adventures and Nashville Ghosts on your next trip to Nashville.

Nashville, founded on Christmas Eve in 1779, was an early American settlement that found its fair share of violence and low mortality rates. Named after the revolutionary war hero Francis Nash, it was referred to as Nashborough by the early inhabitants of the new settlement. Native defenses were common, and many settlers did not survive past an early age. Some of the inhabitants of the Nashville City Cemetery tell this story. Charlotte and James Reeves Robertson came to middle Tennessee from North Carolina during the revolutionary war. Native Americans defending their homes often bestowed brutality upon new land inhabitants. Two of the Robertson children died amidst the violence. Another child was barely revived after being scalped in an attack. While these children were placed into some unknown grave, the Robertsons now reside in the city cemetery and are early founders of Nashville.

By 1850 the cemetery had grown to hold over 11,000 former inhabitants of Nashville. The city had seen its name rise to prominence throughout the years. Its strategic placement by the Cumberland River boosted its population to over 300 by 1800. Nearly half of that population were enslaved or free African people. Hundreds of their descendants now reside in this cemetery. By 1843 Nashville had become the State Capitol, but not without its problems. In 1849 a Cholera epidemic hit the city. Killing 627 people, one of them being president James K Polk. Their remains, except for Polk, now rest at this site. 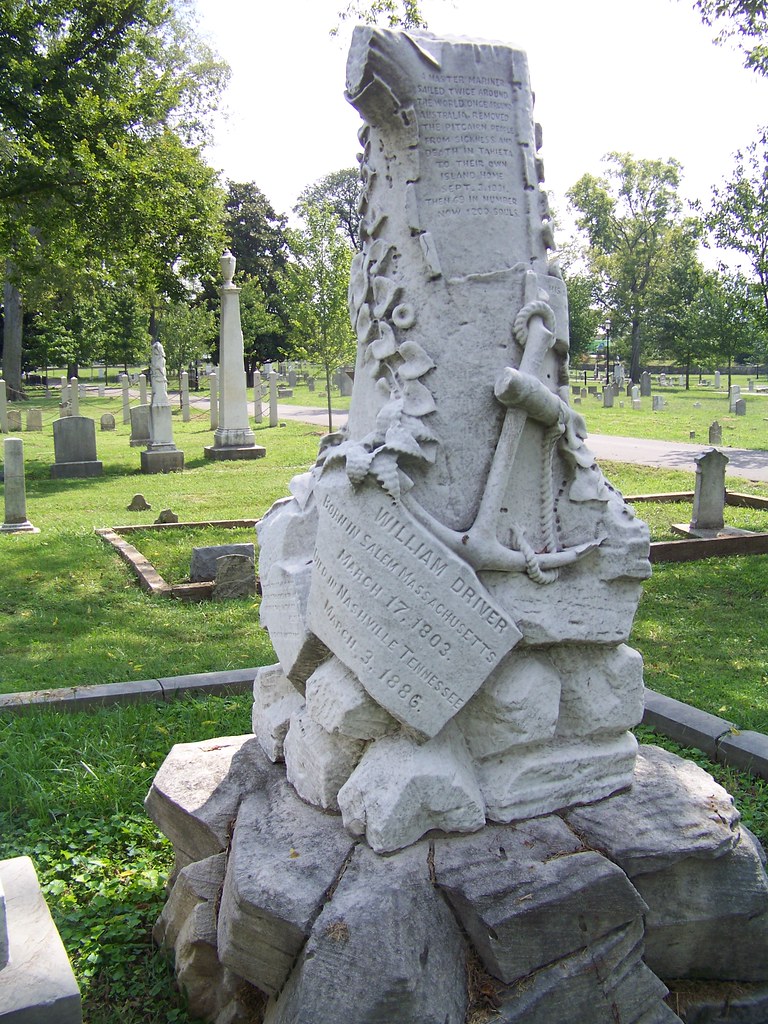 Most famously, Captain William Driver, the man responsible for “Old Glory,” The nickname of the American flag, is buried in the Nashville City Cemetery. Upon his grave, his coinage “Old Glory” is inscribed. During the Civil War, he provided Union troops with his own flag to fly securely above the Capitol building after their victory. It had been sewed into a quilt and hidden for safety by Driver. He passed in 1886. One of the fifteen mayors, revolutionary war heroes, Confederate generals, and others now sleep eternally at the Nashville City Cemetery.

Not all spirits here are at peace. In the center of Nashville City Cemetery is an ivy-covered boulder marking the site of a tragic death. Seemingly cut from the crag of a nearby mountain. This boulder is the tombstone of Ann Rawlins Sanders, the young wife of a gentleman named Charles Sanders. One fateful night the two disagreed. A lovers’ quarrel that ended in tragedy. Ann left home, searching for safety elsewhere. Only to meet her fate at the bottom of the Cumberland River. She fell, careening down the river’s high banks, into the water below. Ann was later found further downstream. She had been knocked unconscious and drowned. To commemorate the tragedy, Charles had a boulder placed upon her grave. To this day, many reports see her apparition late at night. A lantern dangles above the boulder. It is said that Charles made sure to have it placed there to guide her way in the afterlife. 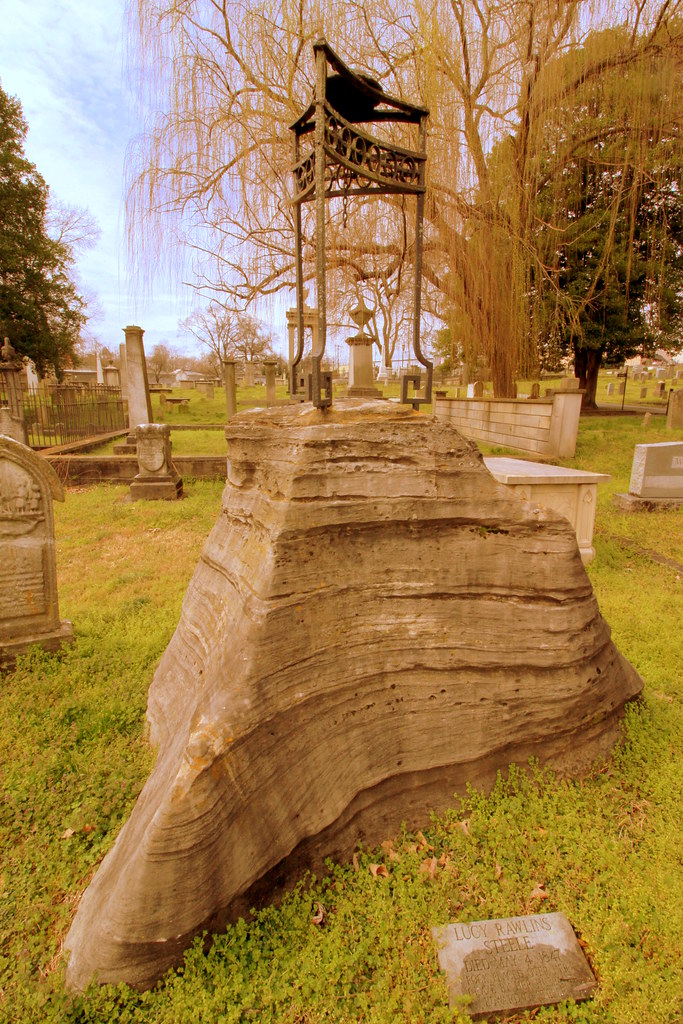 Ann’s ghost may very well be in the cemetery. There is no denying that figures have been seen near the boulder. But perhaps she is resting in a different grave? It turns out the “Ivy Boulder” is the tomb of her sister, Lucy Rawlins Steele. She died tragically in 1847. Likely from Cholera, the breakout of 1849 was merely two years away. Her husband, Edward Steele, quit his job two years later. He was the financier behind the very expensive tombstone. He could not handle the immense loss of his beloved wife and left town. Ann Rawlins Sanders did truly die tragically young. Her tombstone reads 1815-1836. A mere twenty-one years old, and obituaries match up with these dates. If her death was a suicide or due to disease remains to be seen. Yet, her spirit has been seen by many. Begging for her soul to be laid to rest, she wanders the area near the boulder night after night.

The Spirits of Nashville 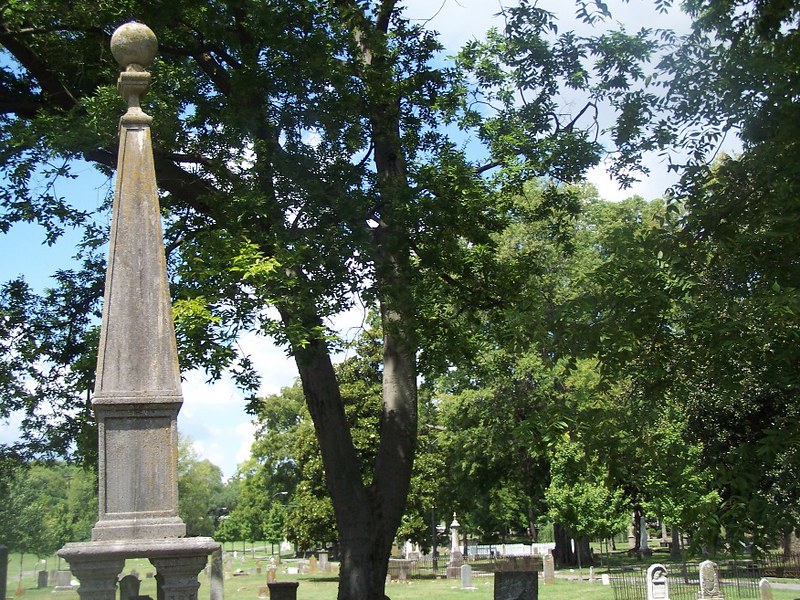 The Nashville City Cemetery was not the first Cemetery in Nashville, some records show those sites were closer to the river, but it was the first official cemetery. As such, the canon of Nashville history reads like a well-written essay. People from all aspects of Nashville can trace their roots back through the information in its hallowed ground. Many spirits of their ancestors likely walk between the tombstones. Some say they have seen certain phantom figures lighting up the lantern that once adorned the Rawlins tomb. Nashville’s City Cemetery isn’t the only haunted locale. The spirits sing to onlookers all over the whimsical Music City. Next time you visit Nashville, take a ghost tour with US Ghost Adventures to learn more.