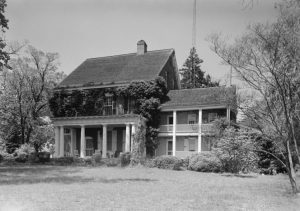 Built in 1790, Woodburn Mansion was constructed by Charles Hillyard, a man known for his amazing artistic taste. He created a gorgeous mansion, perfect for the needs of a state governor. The mansion’s layout includes music and drawing rooms, large hallways, a cellar, seven bedrooms, and even a drawing room.

The inside of the home showcases paneled walls, huge windows, and immense staircases.

When the mansion was purchased out of private hands in 1966, funds were dispersed to restore and renovate the entire structure — this included decorations, furnishings of the time, and other objects that set it apart from the rest of the homes in the area. It remains an authentic example of a 1790 Georgian mansion to this day.

The mansion itself sits on a rolling estate, dotted with enough trees to make an arboretum seem empty, including Boxwoods, Crepe Myrtles, and pines of various species. There’s even a Boxwood maze in the formal garden of the home. One tree, an ancient Popular even has a ghost story attached to it, one that leads local children to steer clear of the mansion after dark.

The Delaware Governor’s Mansion, or Governor’s house, is the official residence of the governor of Delaware as well as his family. It’s listed on the National Register of Historic Places and has been since 1972.

The land that Woodburn Mansion sits on was granted to David Morgan and his heirs by the Swedish crown in 1684. In the 1780s, Charles Hillyard III purchased the land at a sheriff’s sale for just $110. He then constructed the home that would later be called Woodburn in 1790.

The home was later inherited by Mary, Hillyard’s daughter as well as her husband Martin Bates. Bates was a successful man, a doctor, merchant, lawyer, and senator — a truly impressive resume. In 1820, Bates leased Woodburn to then governor, Jacob Stout.

The home switched hands again when Bates sold the Woodburn home to Daniel and Mary Cowgill in 1825. Cowgill was a devoted Quaker and abolitionist, and freed the slaves his family once owned and invited them to meet in the great hall at Woodburn. The home remained in the family until 1912 when it was sold to Daniel Hastings.

Under his ownership, the home received a much needed face lift, and when 1918 rolled around, he sold the home to a retired dentist named Frank Hall. In Hall’s residency, a young woman named Jessica Irby visited the home, and she would later live in the house as the wife of a governor of Delaware.

When Hall died in 1954, the property was split into two, with a school purchasing the majority of the land and a man named Thomas Murray purchasing the home and a surrounding acre and a half.

The home was once again reborn as the governor’s house in 1965 when Governor Charles Terry Jr. and his wife Jessica secured Woodburn for the state. The home was refurbished by Mrs. Terry and an open house was even hosted in 1966. Woodburn has served as the official governor’s residence ever since — kind of like Delaware’s White House!

Manifestations at the Woodburn Mansion

Woodburn Mansion is not just home to Delaware’s governors, but also to several friendly ghosts and one malevolent one who takes pride in terrifying the living.

The first ever report of ghostly activity in the home can be found in a paper from 1824. It was recorded by Judge Fisher in a paper he wrote for the Historical Society of Delaware called ‘Dover in 1824.’

“a Dr. M.W. Bates and his wife lived at Woodburn Mansion in 1824. They had a Lorenzo Dow as a guest overnight. As Lorenzo was going down the stairs to eat breakfast with the Bates, he passed a gentleman going up the stairs, who was “dressed in the fashion of the preceding generation, complete with queued hair, knee breeches, ruffled blouse, etc.” This apparition was solid, and Lorenzo thought he was another guest, and didn’t realize it was Mrs. Bates’ long, departed father, which he later learned at the breakfast table from the Bates themselves.’

It seems as if the hauntings at Woodburn have been going on for close to two centuries now.

More than a few owners and visitors have reported unexplainable activity going on inside the mansion. One owner even stated that while he filled his crystal decanter with wine each night, he always found it empty the next day — perhaps he just doesn’t remember his late nights with a glass of wine (or five) and it surely sounds like something a party animal would say! However, it’s also well known among locals that the ghosts of the Woodburn home are fond of wines of all colors and tastes…

Governor Charles Terry Jr. had even had his own experience when an apparition of a man in a while wig had been spotted helping himself to a class of wine in the dining room, and sometimes even emptying bottles of vintage wines in the cellar — perhaps the previous owner was telling the truth!

A former governor’s wife had heard footsteps coming up and down the stairs on occasion after everyone else had gone to sleep.

Another ghost of the Woodburn home is seen as an apparition floating and gliding around the home dressed in Revolutionary War garb.

A little girl’s ghost has been seen by the garden pool playing around in a red gingham dress — she was first spotted in the 1940s and has resided at the mansion ever since.

This entity is believed to be the spirit of a former southern slave raider. The Woodburn Mansion used to be part of the Underground Railroad during the pre-Civil War era. Enslaved people were once hidden in the cellar of the home until they were able to make their escape on boats at night.

The story says that one night, southern slave raiders caught wind that the mansion was being used as a hideout. They came to the mansion seeking slaves and when Daniel Cowgill grove the raiders off, one of them decided to hide out in a huge tree that remains in front of the mansion to this day.

As karma would have it, the raider slipped, his head getting caught in a hole in the tree, and he hung there until he died. On occasion, people have been the apparition of a man hanging in the tree.

This spirit is known to bother the living, appearing as a frightening entity, coming through as cold chills, and even making physical contact with the living at the home.

The spirits of Woodburn Mansion are ‘alive’ and well, haunting the home to this very day.

During the 1985 inauguration party for Governor Michael Castle, various guests felt the tugging of an invisible presence. One guest spotted the apparition of the little girl standing/floating in the corner of the reception room.