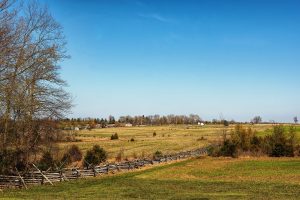 On July 1, 1863, the quiet town of Gettysburg, Pennsylvania, became hell.

Union and confederate soldiers battled across 6,000 acres of farmland for three days, leaving blankets of corpses in their wake. By the time the muskets fell silent on July 3, the battle had amassed 50,000 casualties. The dead outnumbered citizens 12:1.

It was the bloodiest battle of the American Civil War, and — for some — it never ended. Restless spirits have haunted the town and surrounding fields for the last 150 years.

Why can’t they move on?

Why is Gettysburg Haunted?

By the time the union met the Confederacy outside Gettysburg, the Civil War had been raging for two years.

Over 200,000 men were dead, and there was no clear victor — only a mountain of casualties and stubborn aggression. Both sides knew the next battle would be critical.

Bolstered by the confederate victory at the Battle of Chancellorsville, General Robert E. Lee ordered his troops north, where he would attack the union on their own soil (and move the war out of battle-ravaged Virginia).

Over the next three days, the two armies battled across 6,000 acres of land, moving from field to field, trading victories and defeats. Each attack left a thick sheet of carnage in its wake.

By the final day of battle, the temperature had climbed to a sweltering 86 degrees. The stench of rotting flesh and gunpowder hung in the air as union soldiers gained the advantage at Cemetery Ridge.

Meade had managed to outsmart Lee, and the confederate army suffered a significant loss. The Virginia general retreated with wounded men and wounded pride. The battle was finally over.

The first burial party was sent out on July 4: the 87th anniversary of America’s independence from Britain. But there were no fireworks — only the horrific destruction of war.

Gettysburg alone killed more men in action than the entirety of the American Revolution. The townspeople were drowning in death.

“Burial Parties were sent out, and those who could get away from their commands went out to view the scene of carnage, and surely it was a scene never to be forgotten. Upon the open fields, like sheaves bound by the reaper, in crevices of the rocks, behind fences, trees, and buildings; in thickets, where they had crept for safety only to die in agony; by stream or wall or hedge, wherever the battle had raged, or their waking steps could carry them, lay the dead. Some, with faces bloated and blackened beyond recognition, lay with glassy eyes staring up at the blazing summer sun; others, with faces downward and clenched hands filled with grass or earth, which told of the agony of the last moments. Here a headless trunk, there a severed limb; in all the grotesque positions that unbearable pain and intense suffering contort the human form, they lay.”

Men dug shallow, mass graves, toppling bodies into them one-after-another. There were no last rites, no eulogies, and no prayers. The grave diggers worked quickly and efficiently, burying thousands within the first twelve days. But rain undid much of their work, washing away the shallow burial sites and exposing the corpses to the elements again.

Pennsylvania Governor Andrew Curtin was appalled by the scene.

Over the next few months, he worked to establish the country’s first national cemetery on Cemetery Hill, where the bodies of union soldiers were re-interned and given a proper burial.

The confederate soldiers wouldn’t be exhumed and re-buried until a decade later. Even then, the country was still divided. Their bodies were transported to Richmond, Raleigh, Savannah, and Charleston.

Lincoln stood at the podium and delivered the now iconic Gettysburg Address — a poignant, two-minute eulogy for the thousands of men who had been denied one.

“…The world will little note nor long remember what we say here, but it can never forget what they did here,” he said.

It seems the soldiers won’t let us forget.

For some, the battle is still happening — day after day, night after night. Their spirits are trapped in the fields and streets of Gettysburg — but why?

It has all the makings of a classic haunting: strong emotions, traumatic death, improper burial, and unfinished business.

Though the union won the battle, Meade let Lee’s army retreat and regroup — a heavily criticized decision. Had he attacked the weakened Confederate forces one last time, the Civil War may have ended in Gettysburg, Pennsylvania, rather than dragging on for another 21 months and killing another 400,000 men.

For the Confederacy, the battle was a bloody, costly mistake. The southerners who died there died in enemy territory and remained in shallow, unmarked graves. At the same time, the union soldiers were given proper burials and honored with a grand ceremony and presidential speech.

It should come as no shock that the spirits on both sides are restless and angry.

Visit Gettysburg, and you’re bound to experience something other-worldly — an odd feeling in the pit of your stomach or the sight of a spirit in full wartime garb.

Paranormal Investigator Adam Berry became a believer after visiting the battleground in his youth. He wandered away from his tour group and saw fuzzy white figures moving through the trees. Then he heard gunfire, yelling, and twigs breaking all around him.

Tourists, tour guides, and locals alike have reported odd happenings over the years. These are only a select few:

Soldiers in the Field

The drama and bloodshed of the battle turned the sleepy town of Gettysburg into a tourist attraction nearly overnight.

Hundreds of thousands of people have traveled to Pennsylvania to watch live reenactments over the years. Even Hollywood paid a visit. The 1993 drama Gettysburg was filmed in the fields where the battle occurred.

Five thousand reenactors were hired for the movie — all in genuine, period-appropriate clothing. One day, a few actors were resting at Little Round Top when a haggard old man in a union uniform approached them.

He was dirty and disheveled and smelled like black powder. He reached out and handed them a fistful of musket rounds before disappearing — but these weren’t the blanks they had been using for the movie. Later analysis revealed they were genuine Civil War-era bullets, and he wasn’t a movie extra.

There are dozens of reports of full-bodied apparitions in the fields of Gettysburg. Visitors assume they’re reenactors, only to turn around and find they’ve disappeared. The sounds of war usually accompany these sights: cannons firing, horses galloping, and men screaming.

Occasionally, visitors experience physical sensations: someone pushing them forward or whispering in their ear.

Even die-hard skeptics admit feeling like they’re “surrounded” while standing where the soldiers stood, arms at the ready. Their anger, fear, pain, and sadness are still imprinted in the fields over a century later.

According to local legend, this rock formation was haunted long before the Civil War erupted. It was the site of a bloody Native American battle that predated the town’s settlement. In 1880, Emmanuel Bushman wrote about the “many unnatural and supernatural sights and sounds” in the area, including native war cries.

But any existing local lore was quickly overshadowed by the 19th-century battle.

Now Devil’s Den is known as the home of several Confederate spirits, including a ghost whose corpse was used as a prop by two photographers.

Alexander Gardner and Timothy O’Sullivan were capturing the horrific aftermath when they came upon the dead infantryman. They took several photos of him where he fell but realized they needed a better story to go with the body. Devil’s Den — a short distance away — would have been the perfect hideout for a rebel sharpshooter. What was the harm in taking a bit of creative license?

They staged the soldier’s body between the rock walls with a prop gun, then cooked up a story about his tragic death. According to the Library of Congress, the men may have been a little desperate. Most of the bodies had been buried by the time they reached the battleground, so they were about to run out of usable material.

It seems the rebel ghost hasn’t forgiven them.

But that isn’t the only paranormal activity reported at Devil’s Den.

For decades, people have reported seeing a dirty “hippie” man who gives them directions before disappearing into the air. Some historians believe it’s the spirit of a soldier from General Hood’s Texas Brigade.

The men weren’t given standard confederate uniforms, which accounts for the “hippie-like” appearance. The Texas infantry also played a prominent role in the rebels’ brief victory at Devil’s Den, where they picked off union soldiers using the large boulders as cover.

The town of Gettysburg is as haunted as the battlefields surrounding it. Every home, church, and business was used as a hospital, and a portion of the fighting occurred in the streets, killing one civilian.

Jennie Wade, 20, was shot through the heart while kneading dough for the soldiers. Her home is now the Jennie Wade Museum, one of the town’s most active paranormal sites. You can still see the bullet holes from the battle and the original floorboards — blood and all.

But the most fascinating part of the museum is the evidence that Jennie still resides there. Videos and EVPs have captured her restless spirit moving through the rooms of her former home, and some visitors have reported being touched by a phantom hand.

Civilian or not, Jennie Wade died for her country the same way the soldiers were killed in the fields. She’s eternally tied to them and them to her.

The Gettysburg Hotel, Sachs Covered Bridge, Children’s Orphanage, and Daniel Lady Farm suffered similar fates. Their walls are riddled with bullet holes, and floors are stained with blood. Nurses with blood-spattered dresses tended to dying soldiers within those walls. And when it wasn’t enough, the bodies were stored there in an attempt to fend off decomposition.

The town of Gettysburg is permanently scarred by violence and an overwhelming sadness — sadness for the young men and women who died and sadness for a country torn apart by war.

Over 150 years later, the country is torn apart again. Recent tensions may have agitated these spirits even more.

But there is one note of hope for both the living and the dead: Lincoln was right. We will never forget what they did.

The question is: Will we learn from it?