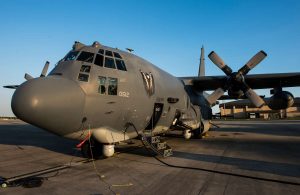 In honor of Veteran’s Day and to stick with our area of expertise, let’s dive into the history of Spooky gunships! With their miniguns and cannons, fixed-wing gunships illuminated the battlefields of yesterday and today with their flare.

Defenders radioed for fire support, and soon the sound of two engines could be heard above in the inky black sky. As flares dropped from the aircraft, the Viet Cong watched and waited for the planes to leave the area before continuing their assault.

As the Viet Cong hid, a roar from what was described as an ‘unseen dragon’ filled the humid night air. Every few seconds, the roar stopped, but only to return from another direction with streams of fire.

Faced with a devastating new weapon, the Viet Cong withdrew.

These were the first nighttime combat missions flown by a modified twin-engine cargo plane. By the end of 1964, the modified C-47s undergoing combat missions in Vietnam had flown 16 nighttime missions. They fired nearly 180,000 rounds to defend the Republic of Vietnam outposts in and around the river delta.

The Birth of Gunships

Although side-firing gunships are most often associated with Vietnam, the concept was born more than ten years before during WWII. In 1926, Army 1st Lieutenant Fred Nelson proposed engaging ground targets with automatic weapons mounted perpendicular to the axis of an aircraft while the pilot flew a turn around an imaginary center point.

This would allow the pilot to keep his target in sight while directing a near continuous fire onto it. In 1927, he proved his point, mounted a .30 caliber machine gun on a biplane’s left wing, and successfully engaged a target.

Despite this, his concept was rejected for being too radical.

In the summer of 1942, MacDonald tried again to find a sponsor for these side-firing gunships to use against ground targets instead of submarines.

His proposal was rejected twice again.

The Korean conflict brought new demands, and MacDonald again recommended lateral-firing rockets and guns to the Limited War Committee at the Tactical Air Command. The committee showed no interest in MacDonald’s ideas.

MacDonald later met another man interested in lateral-firing gunships at a symposium at Eglin Air Force Base — this man, Ralph Flexman, would be an integral part in the development of the modern gunship.

Finally, the idea landed on fertile ground when the proposal reached the Air Force’s Aeronautical Systems Division. The project was approved and named Project Tailchaser.

After a few more tests and missions, the new aircraft did not wait for the deployment of full Ac-47 squadrons in Vietnam before it gained a reputation — and a nickname.

During the spring of 1965, Captain Jack Harvey flew a night mission to defend a village in the Mekong River Delta. A reporter witnessed the action and described the image of tracers streaming to the ground as ‘dragon’s breath’ amid the roars of the guns.

On reading the report, the commanding officer of the squadron reportedly declared,

The name stuck. So, how did the gunships end up with a name like Spooky?

Shortly after the aircraft began to be deployed, the gunships were christened with the lasting name ‘Spooky.’ How this occurred remains a topic of debate, but two versions of the story have survived.

The first involved the mundane procedure of providing a call sign for new aircraft. During a conversation between Air Force headquarters and a squadron, two fighter pilots overheard the discussion and said, ‘What? Give that spooky Gooney Bird a tactical call sign?’

To this, Spooky was born.

The second story tells that Spooky was born from the plane’s infamous nighttime missions and unusual camo pattern.

Regardless of the origin, the name stuck and has been used to describe certain gunships since. An interesting story, to say the least!

All of us at US Ghost Adventures want to thank the men and women of our armed forces for the sacrifices they make every single day for the betterment of our country. We wish you safety and a very happy Veteran’s Day!