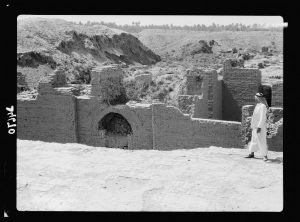 An ancient Babylonian etched their experiences into stone, solidifying their story for thousands of years.

Yes, you read that right! A 3,500-year-old stone tablet carved near 1500 B.C.E. is thought to be the earliest known depiction of a ghost. The clay tablet is part of a guide, a ‘how-to’ for exorcising ghosts, held in a collection at the British Museum.

Curator Irvine Finkel explains that the artifact was acquired by the museum in the early 19th century, but had never been put on display. Finkel says that the tablet is unassuming, there seems to be no writing and the etchings are very hard to see. Once the tablet is put under light and viewed from above, he says ‘those figures leap out at you across time in the most startling way.’

The tablet itself is pocket-sized, able to fit snugly into the palm of your hand. Half of it is missing, but the tablet’s tale still tells of the ancient instructions on getting rid of unwanted ghostly guests in your home. The directions state that the exorcist must make figurines of a man and woman, prepare two cups of beer, and at sunrise, speak a ritual that calls upon the Mesopotamian god Shamash, who was thought to be responsible for bringing the dead to the underworld. The idea was that the unwanted spirit would be transferred into one of the figurines.

According to Finkel, the tablet was created by someone who was skilled with detailed drawing in clay, specifically. The tablet is thought to have been held in an exorcist’s library or temple.

In earlier civilizations, people expected to encounter spirits in their daily lives. The idea of the afterlife and ghosts wasn’t considered ‘strange’ or ‘taboo.’ Respected ancient scholars like Pliny, Lucian and Plautus all wrote about and referenced spirits in their writings. Ancient Mesopotamians relied on funerary rituals to keep the dead from rising again. Ghosts, deprived of eternal rest, were generally reacted to with feelings of strong empathy and sympathy. All major ancient civilizations held strong beliefs involving the survival of souls. Spirits were believed to have the ability to return to the world of the living if they died with unfinished business, or if their funerals weren’t just right.

In Mesopotamia specifically, spirits could return as manifestations of illness among the living. Sickness was treated with spells and exorcisms, as well as confessions of sins. Feeling feverish? Tell me all the wrong you’ve done, as now your Aunt Betty is haunting your body!

Some scholars even left detailed instructions on how to rid yourself of pesky spirits, just as this newest discovery does.

The tablet focuses on removing an older male ghost by having a young woman lead him into the underworld. Finkel reported that ‘it’s a male ghost, and he’s miserable. Maybe Uncle Henry’s lost three wives. Something that everyone knew was that the way to get rid of the old bugger was to marry him off. It’s not fanciful to read this into it, it’s kind of an explicit message. There’s very high-quality writing there and immaculate draughtsmanship.’

The final message on the tablet urges readers to ‘not look behind you!’

Is this a message for the spirits moving forward to the underworld, or a message for an exorcist to mind his surroundings when performing these ancient rituals? You can decide for yourself on that last part, we’ll heed the warning and keep our eyes facing forward.