The True Story Behind The Mothman of West Virginia 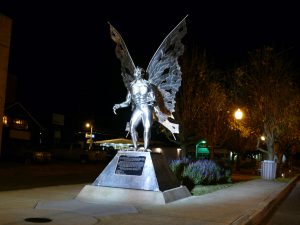 Shhh, do you hear it? The thundering flaps of mysterious wings, the breeze that follows, the red eyes that stare back… legend tells of a terrifying flying creature dubbed ‘The Mothman,’ that has mortified countless Point Pleasant residents throughout the 1960s. When a bridge mysteriously collapsed in the area, the creature was blamed for the deaths of 46 people.

So, where does the legend start, and is there any truth behind the tale?

On November 12th, 1966, a group of gravediggers hard at work in Clendenin, West Virginia, noticed something out of the ordinary. They glanced up from their ditches to see something massive soaring overhead — it was darting from tree to tree. The gravediggers later described this entity as a huge, brown-winged human being.

The gravediggers were scared — which says a lot, considering their occupation. They had no idea what to make of this winged beast.

That’s the first reported sighting of the Mothman, an elusive creature that remains just as frightening and mysterious as it was when the first few witnesses laid eyes upon it.

The Legend is Born

Just three days after their initial report, witnesses in the nearby town of Point Pleasant noticed a winged creature about six or seven feet tall standing in front of a car they were in. Eyewitnesses Roger Scarberry and Steve Mallett told the local paper at the time, The Point Pleasant Register, that the creature donned a 10-foot-wingspan, red eyes, and an urge to avoid the headlights of the vehicle.

According to witnesses, the creature could fly at ridiculously fast speeds, upwards of 100 miles per hour. The beast chased the witnesses to the outskirts of town, and then it ran into a field and disappeared.

They knew it sounded absurd — a flying, giant moth with red eyes terrorizing cars? Scarberry assured the paper that if he had seen it by himself, he wouldn’t have said anything… but four people saw the Mothman that day; it couldn’t have been just a figment of his imagination.

Reporters were skeptical, naturally. Folks believed the Mothman was nothing more than an overgrown owl or an eagle. The reporters did print Mallett’s description of the creature…

More and more sightings began to occur, and the legend of the Mothman started to take shape. The Gettysburg Times reported eight additional sightings three days after the first report. They included two volunteer firefighters, who said they saw a huge bird with glowing red eyes.

One Salem, West Virginia, resident reported seeing strange patterns on his television and then hearing mysterious noises outside his home. As he shined a flashlight toward the direction of the noise, he witnessed two red eyes glowing like reflectors back at him.

Some believe that the Mothman was even responsible when this resident’s dog went missing — that this fearsome creature stole a beloved pet.

Is There A Logical Explanation?

So, is there any scientific reasoning for the Mothman? Is there a natural creature that can be placed in all of these sightings?

Dr. Robert L. Smith, an associate professor of wildlife at West Virginia University, stated that a flying monster was never stalking the town. He attributed the sightings to a large Sandhill Crane, which stands as tall as a man and has bright red skin around its eyes. 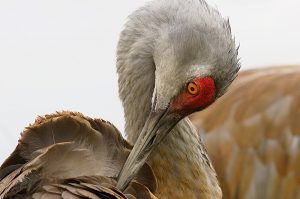 Could this bird be the explanation for the Mothman? Source: Nebraska Outdoors

Some people took this explanation and ran with it, stating that the crane must have been deformed, especially if it lived in a nearby area that was once filled with nearby bunkers used to manufacture munitions during WWII. Perhaps these bunkers leaked toxic chemicals into the wildlife preserve and created a monster crane.

Another theory suggests that the Mothman was just a prank, and when the press began to report on the topic, people in the small town of Point Pleasant started to panic.

Locals were convinced they saw the Mothman daily, and it’s worth noting that the Mothman’s physical appearance resembles several types of demons encountered during bouts of sleep paralysis. Maybe these visions are nothing more than human fears incarnate, a trick of the mind; a strange entity pulled from the subconscious of fearful locals.

On December 15th, 1967, just over a year after the Mothman was first seen, the Silver Bridge was packed with cars. The bridge was placed under extreme strain. The bridge was initially made for lighter cars; Model T’s only weighed 1,500 pounds — modern cars were over 4,000.

The bridge engineers weren’t too cautious or imaginative when creating the bridge, and when one part of the bridge failed, the rest followed suit.

Without warning, a single eyebar near the top of the bridge on the Ohio side cracked. The chain snapped, and the bridge fell to pieces, plunging people and cars into the icy waters of the Ohio River below. Forty-six people died by drowning, hypothermia, or being crushed by the wreckage.

The bridge collapse was the second bizarre thing that put Point Pleasant on the map, following the Mothman sightings. It wasn’t long before the two cases were connected, and the Mothman was blamed for the bridge’s failure.

Point Pleasant’s fame as ‘Home of the Mothman’ continues to this day. Movies and books have been written about the subject, and the Mothman has been kept very much alive throughout the decades. There even exists the idea that the Mothman predicts disasters. He is seen standing atop the newly constructed bridge just before disasters, including the Mexican Swine Flu outbreak of 2009 and even the 2011 nuclear disaster in Fukushima, Japan.

Sightings of the Mothman have slowly declined since the late 1960s, but every so often, a sighting emerges. In 2016, a man who had recently moved to the area saw a creature jumping from tree to tree, just like in the original report. He claimed that he had been unaware of the legend until he saw the beast himself.

The legend of the Mothman lives on in museums, a 12-foot-tall chrome statue of the beast and Mothman plushies being held in the arms of children as they visit the many gift shops of the town. 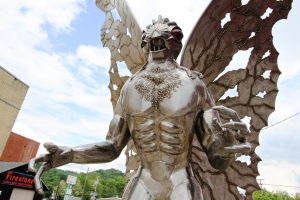 There is even a Mothman Festival, which celebrates one of America’s strangest local legends — this party attracts locals and visitors alike, like moths to a flame.

So, what do you think? Has a fortune-telling demon entered the airspace in West Virginia? Or is this just a case of mistaken identity?