The Legend Behind Dybbuk Boxes 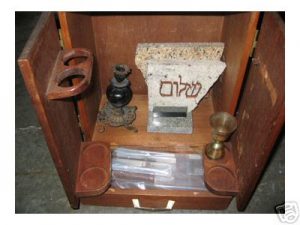 From Jewish folklore to an eBay purchase that left a man in a ‘tidal wave of bad luck,’ dybbuk boxes are wine cabinets claimed to be haunted by a dybbuk, a malicious demon said to hold the power to invade and possess a living person.

Authentic dybbuk boxes will usually come with some sort of backstory and certified documents, such as papers signed by a rabbi that state ‘under all circumstances do not open.’

So, what exactly is a dybbuk box, where did the legend start, and how in the world did a man in California get his hands on one?

A dybbuk, or dibbuk, in Jewish folklore is a disembodied human spirit that, because of former sins, wanders restlessly until it finds a haven in the body of a living person. Belief in such spirits was prevalent in the 16th and 17th centuries in eastern Europe.

The word dybbuk is an adaptation of the Hebrew root davek, which means to cling or to cleave. A dybbuk is considered to be a sticky, evil spirit — a deceased, disembodied malcontent who clings to a living person in order to find respite from its troubles. The phenomenon of being overcome by an otherworldly spirit has a long history in Judaism. In the book of Samuel, David rids King Saul of  “a spirit of melancholy from God” by playing his harp. The idea of the dybbuk gained traction in the 16th century, when kabbalah, flourishing in the northern Galilee city of Tzfat, promulgated ideas about the afterlife.

Often individuals suffering from nervous or mental disorders were taken to a miracle-working rabbi, who alone, it was believed, could expel the harmful dybbuk through a religious rite of exorcism.

Isaac Luria, a mystic, laid the grounds for Jewish belief in a dybbuk with his doctrine of the transmigration of souls, which he saw as a means whereby souls could continue their task of self-perfection. His disciples went one step further with the notion of possession by a dybbuk.

Dybbuks are basically malevolent spirits looking for a warm body to call home. So, what could go wrong when buying a strange box with a dybbuk inside on eBay?

eBay and the Dybbuk Box

As the story goes, a dybbuk box appeared in 2003 when antique store owner Kevin Mannis bought a vintage wine box from a 103-year-old Holocaust survivor on eBay. After a strange string of unexplained hauntings, recurring nightmares, bruises, and smells of ammonia, the box found its way back onto eBay and landed in the hands of a man named Jason Haxton. He too felt the wrath of the box, and ended up burying it somewhere in Missouri, but not before pulling it out of the ground to appear on the television show Ghost Adventures.

‘The day it arrived, I put my hands on it, and it almost feels like the thing collapses into a liquid state, I felt like a knife was coming into my guy, I was paralyzed in pain. When I go to bed, I have terrible dreams of a hag that seems to come with the box.’

Haxton said he first heard about the box from a colleague whose roommate had listed it for sale after a string of terrifying events.

The box is said to have come from an Oregon estate sale of a Holocaust survivor. The person who bought the box at the estate sale was told that the box was ‘always shut, and set in a place that was out of reach. It was never, ever to be opened.’

Haxton had paid $280 for the box, and when opened, contained a goblet, two locks of hair tied with string, pennies from the 1920s, a dried rosebud, a cast iron candlestick holder, and a granite statue engraved with Hebrew letters. Haxton said that he didn’t believe the stories associated with the box, and didn’t have any worries when opening it.

After he acquired the box, he became very ill. He called it a ‘tidal wave of bad luck.’

Haxton stated that all of his issues vanished when he followed a rabbi’s advice to place the cabinet in a gold-lined wooden container to negate whatever entity was inside. He now keeps the cabinet inside a military-grade case, which he buried.

Thousands of folks have offered to buy the box for any price, but Haxton states it’s unethical for him to sell it.

Haxton states that he isn’t worried by the box’s resurfacing — he believes that the dybbuk’s unfinished business is finished. In fact, Haxton now believed that the dybbuk box’s energy has reversed, so much so that he calls it his personal ‘fountain of youth,’ and states that his vitals are better now than when he was 40 — he attributes his enhanced feeling to the haunted heirloom.

A Market of Hauntings

Today, the market is full of dybbuk boxes. Boxes are on online auction marketplaces such as eBay for as low as $20, some as high as $1,000. Haxton states that most of these boxes are fake, just made to be a creepy accouterment to show off to your friends. He says that there are only a few ‘real’ boxes in the world — but who in the world would take the risk?