The Horrors of Centralia, Pennsylvania

HOME » BLOG » 31 DAYS OF HALLOWEEN » THE HORRORS OF CENTRALIA, PENNSYLVANIA
Posted by blogger in US Ghost Adventures 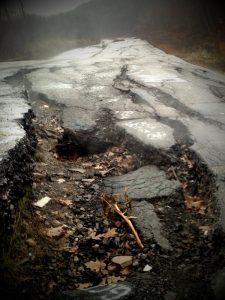 A good horror movie is rooted in reality –– the more probable something is, the more it can scare us. Think about those disclaimers right before the opening scenes announcing that a particular movie is “based on a true story.” Doesn’t that just send chills down your back? The story of Centralia, Pennsylvania, is exactly that type of horror. This small town located near the Eastern Shore is literally a ghost town: according to the last census in 2020, it had a dwindling population of just five residents. But believe it or not, this place is buzzing with activity –– just not the type you would expect. It has long been rumored that Centralia is full of paranormal activity and sinister entities causing havoc –– so much so that an underground mine fire has been burning for the past several decades. And people are paying attention. Director Christophe Gans based the Silent Hill movies on Centralia to depict a town inhabited by nightmarish monsters. This is their story.

Ghosts of the Keystone State

As one of the country’s most important industrial centers, Pennsylvania is known for its steel, coal, and railroad industries. The state’s most interesting export, however, is something less material and tangible: ghosts of all kinds and varieties. Legend has it that Benjamin Franklin’s home state is full to the brim with lost souls and disquieting spirits. And how could it not? Like much of the East Coast, Pennsylvania has a very long and complicated past, including its role during the Revolutionary War or in the aftermath of the Yellow Fever epidemic.  If you’re visiting Centralia, you will have plenty of other haunted spots to check out, including the ones we’re about to share with you. 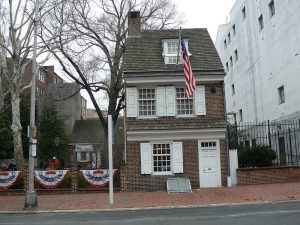 Next time you’re in town, you simply have to swing by Philly and check out the Betsy Ross House. Built over 250 years ago, well before the country we know today was even born, this residence housed Betsy Ross –– the woman who is credited with designing the American flag. People who visit the property today claim to see Betsy herself walking around, maybe imagining what an upgrade of our nation’s main symbol would look like. Are the stars going out of style? We could ask her, but she’s not exactly approachable. Visitors also report hearing disembodied voices and all sorts of strange sounds. It doesn’t help that the property has witnessed a number of murders over the years. As soon as you walk through these doors, you can feel very dark and foreboding energy that is sure to leave a mark.

And, of course, this list would be incomplete without the American Philosophical Library, home to none other than Benjamin Franklin’s famous ghost! Credited with inventing the concept of the library as we know it today, this place doesn’t seem haunted or intimidating at all. Unlike the stereotypical haunted location with dark corners and broken windows, this building is enlightened, regal, and even welcoming. But don’t be fooled: this is old Ben’s playground. Eyewitnesses claim to see his statue coming off the pedestal and walking around the property. There are also those who claim to see a resembling ghost power-walking around the library and pulling books from the shelves –– even in the afterlife, our nation’s most erudite man is committed to a life of learning and education. He might just be the nerdiest, most-learned ghost of them all.

The horror film Silent Hill is famously indebted to Centralia, PA. The director and writers have openly admitted to drawing inspiration from this deserted Pennsyalvnian town, as well as from the Silent Hill video game series that was released at the end of the ‘90s. What is it about this small, little-known town that would find its way to the big screen?

According to Roger Avary –– one of the writers of the movie –– he heard many stories about Centralia from his father, who was a mining engineer. The town was infamous in the mining industry after a coal steam fire caused the entire town to be evacuated during the 1980s. In fact, such type of fire is one of the motifs that Centralia shares with the town in Silent Hill, as well as a thick fog that hides who knows what and huge cracks on the ground that threaten to eat you alive. While these cracks can be traced back to the mining operations, there are some who speculate Centralia is a kind of gateway to hell. And if you think you can avoid falling down into the depths of the earth by watching your step, you’ll be disappointed to hear this macabre town is very susceptible to sinkholes –– the ground simply eats you up when you least expect it.

About 50 years ago, in the middle of the 1960s, Centralia was just one of many vibrant mining towns along the Appalachian Mountains. Everything changed one fateful day in 1962 when a fire erupted underneath the entire valley –– a fire that has not been put out since then. Fast forward to 50 years later and blazing flames have been engulfing everything that crosses their path –– including an unknown number of corpses. The temperature of these flames is so unusually high that you can sometimes see steam rising from the ground. 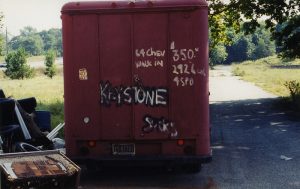 Adding to the eerie mood, and denying all kinds of expectations, there are lots of cemeteries throughout the entire town. Centralia might be the one place in the country with more tombstones than living people –– pretty much everyone who lived here has left for greener pastures. The mine fire burning under the town has left huge patches of the landscape without any trees or wildlife, only adding to the speculation that the flames that burn there are directly from Hell itself.

As you can imagine, the entire place is one huge hazard, and it’s not hard to see why the population jumped ship. Even then, however, there are reports suggesting that those former residents were exposed to very toxic fumes that are now resurfacing in the form of medical comorbidities and ailments among them. And yet despite countless public health warnings, Centralia continues to attract thousands of visitors from all corners of the globe. They come here drawn by the stories of spirits who are said to live beneath us –– literally. According to the stories, the fire that burns under Centralia is the entrance to Hell!

Would you dare visit?