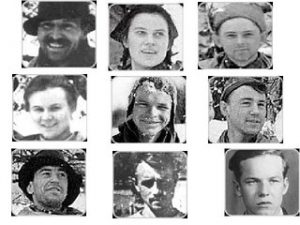 The Dyatlov Pass event was an incident in which nine Soviet students from the Ural Polytechnical Institute died under very mysterious circumstances in the northern Ural Mountains between February 1 and 2 of 1959. They were an experienced trekking group who had trained and planned for this adventure. However, something occurred in the depths of the night that caused these college students to panic in such a manner that they recklessly cut their way out of their tent and fled into the freezing darkness to escape the unknown nightmare they confronted. What happened on that mountain that would cause these well-trained hikers to rush out into the freezing elements without being properly dressed, some not even wearing shoes as they ran through the snow? What took their lives on the Dyatlov Pass that night?

Death in the Dyatlov 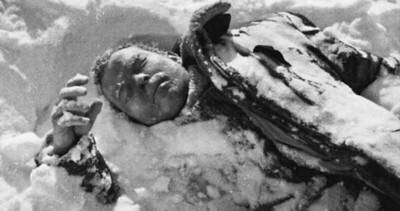 One of the students was found frozen at the moment of his death. Image source.

After several days a search for the hikers was initiated, but they were not found until nearly four months after their deaths. After the group’s bodies were discovered, an investigation by Soviet authorities determined that six of the hikers had died from hypothermia while the other three had been killed by physical trauma. One of the victims had devastating damage to the skull while two other students had severe chest trauma. Another of the unfortunate trekkers had a small crack in his skull. Some sort of violent incident had occurred, but by what or by whom? The investigation concluded that the impact on these bodies was of such a kind that a human being was incapable of inflicting such damage.

An actual photo that was developed from a roll recovered in the gear of one of the hikers. Does this prove that the group was pursued by the legendary Yeti? Some investigators into this case propose this photo simply depicts another hiker in winter gear.

The legendary Yeti was considered a suspect in the killings of these students. What else lived in such frigid conditions and was of the stature to carry out such carnage? Were these young hikers stalked by an elusive yet intelligent man-like beast, pounced upon while they slept, so panicked that they cut their way out of the tent to escape the monster? Let us consider the state of the other bodies, shall we?

Four of the bodies were found lying in the running water of a melting shallow creek, seemingly killed in their tracks as they made their frantic escape. Three of these four had injuries to the soft tissue of the head and face. In a gruesome observation, it was reported that two of the bodies had missing eyes, one had a missing tongue, and one had missing eyebrows. What in nature is capable of inflicting such specific injuries? Well, the Soviet investigation concluded that a “compelling natural force” had caused the deaths of these students. Compelling, indeed.

But does nature burn the skin? Is a Yeti capable of mummifying body tissue? Five of the hikers’ skin had a “deep brown tan,” according to a witness that attended the funeral for the victims. Something, it seems, acted upon the body in such a way that energy was released. Could these adventurous students have been killed not by a ravenous Yeti but by a military operation perpetrated by their own country? 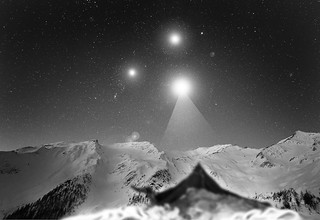 Were these lights photographed by the hikers the precursor to a Russian weapons test that took their lives? Image: source.

Another group of hikers 31 miles to the south of this event reported that they saw strange orange spheres in the sky to the north on the night of the incident. Similar spheres were observed in adjacent areas continually during the period from February to March of 1959 by various independent witnesses, including the meteorology service and even the military! Is it possible that the campsite fell within the path of a Soviet parachute mine exercise? Parachute mines are designed to detonate while still in the air rather than upon hitting the ground and these weapons produce injuries similar to those experienced by the hikers, such as heavy internal damage with relatively little external trauma. During this testing, radiological weapons may have been deployed as well, explaining the discovery of radioactivity on some of the clothing as well as the descriptions of the bodies as having orange skin and gray hair. These weapon-testing theories coincide with reported sightings of glowing, orange orbs floating or falling in the sky within the general vicinity of the hikers and allegedly even captured in a photograph by one of the hikers.

What about the missing eyes or the absent tongue? Weapons aren’t capable of being that selective. No, but remember the bodies were not found for months after their deaths. The mountain was alive in the Spring, and scavenging animals could easily account for the missing body parts.

Problems With This Theory

If the deaths of these hikers were initiated by the testing of radioactive dispersal weapons, why did only some of the victims test positive for radioactivity? The answer may be that they weren’t killed by the Soviets in a military testing exercise but by the United States!

Another theory asserts that the group died due to a photoflash bomb dropped by a US spy plane, and indeed a declassified US document confirms that, in the first half of 1959, there was such a secret mission near the site where the group was camped. The US plane could drop a photoflash bomb, which, due to the mountainous area, exploded closer to the ground than expected. The explosion could have terrified the hikers to the extent that they left the relative safety of their tent and froze to death in the surrounding wilderness. Some of the hikers could have been injured directly by the explosion, explaining why some bodies were discovered further away from the others.

Examining the photos of the various scenes relating to this event is haunting in and of itself. Inexplicable balls of light illuminate the night sky. A shadowy figure seemingly stalked the students. A ripped tent appeared as if it was staged, suggesting that some sort of cover-up was taking place. 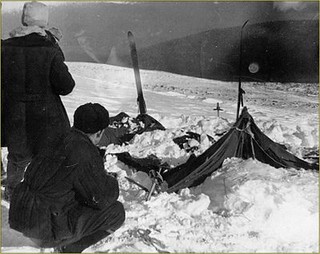 Some conspiracy theorists claim this camping site was staged and no experienced outdoorsman would set their tent up in such a way. Image source.

Also, there was evidence that at least one of the hikers that night managed to light a small fire to keep warm. Whatever killed these hikers was not a swift and sudden death. It was methodical. And footprints discovered leading from the tent seemed as if all of the students were not in a panic but in a slow-paced walk. Heading toward the woods in heavy snow without shoes and poorly dressed. It appeared as if they were being summoned.

Perhaps this mystery will never be solved. Possibly the events that surround the deaths are paranormal and cannot be reasonably explained. Indeed, there may have been a cover-up by Soviet authorities, not because of radiological weapons testing but by the knowledge that something lurks in the past of the mountain.

Something to be avoided at all costs.

The Pass: The formidable pass in the winter where the intrepid students camped

McCloskey, Keith. Mountain of the Dead: The Dyatlov Pass Incident. The