The Devil’s Chair of Cassadaga, Florida 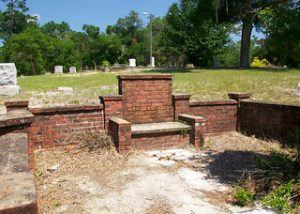 The term devil’s chair, sometimes referred to by a less demonic term such as a haunted chair, is part of the folklore found in numerous places around America. It is frequently attached to a kind of funerary or memorial sculpture typical in the United States during the nineteenth century when graveyards and cemeteries sometimes included carved chairs for the comfort of visitors. In the Victorian Era, cemeteries were often laid out like parks, and people would picnic in them. Part of this park-like mystique was functional ornamentation such as chairs and benches, often known as a “mourning chair,” and cemeteries have since provided benches for visitors.

In reality, some carved chairs were probably not intended for use as anything but monuments. Once the original purpose of these chairs fell out of fashion, superstitions developed in association with the act of sitting in them. In a typical example, seen as a rite of passage, local young people would dare one another to visit the site, most often after dark, at midnight, or on some specified night such as Halloween or New Year’s Eve. Variously, the stories suggest a person brave enough to sit in the chair at such a time may be punished for impudence or rewarded for courage. Out of this tradition, any nearly forgotten stone bench or chair would enter the vernacular as “the devil’s chair.”

Nowhere is more synonymous with having a Devil’s Chair than in Cassadaga, Florida. This is indeed appropriate. Just 35 miles north of Orlando lies the small town of Cassadaga. The architecture in Cassadaga has remained mostly unchanged since it was first settled in the 1800s, leading the community to be added to the National Register of Historic Places in 1991. With a population of only 3,000, this area is known for its abundance of psychic mediums and haunted houses. Of course, Florida is steeped in conservative Bible traditions, so this place is a bit counter-cultural to Southern Baptists. The Cassadaga Spiritualist Camp, a direct affront to traditional Protestantism founded in 1895 by Spiritualist George Colby, cemented the town as a mecca of Spiritualism and psychic mediumship. The town is often called the “Psychic Center of the World.” This town is also home to the haunted Cassadaga Cemetery, in which resides the most famous of all Devil’s Chairs. It is an oversized stone chair that is said to summon the Devil himself when visitors take a seat.

What makes this area such a haven for Spiritualism and hauntings? Cassadaga is said to sit on a vortex, a point of concentrated psychic energy. The vortex is natural, but other vortices in the area are man-made, created by the psychic activity that the town is known for. Other vortices are said to exist at sites like Stonehenge and the location of the Pyramids at Giza. It is within this vortex that the cemetery lies. The gravestones at the Cassadaga Cemetery date back to the 1800s, though vandals have tipped over many headstones. The cemetery mainly consists of those who were residents of Lake Helen and Cassadaga. George P. Colby is among those who are buried here. And, of course, within this vortex sits the large, menacing red brick bench known as the Devil’s Chair.

WHAT BECOMES OF THOSE WHO SIT ON THIS CHAIR?

Many say that the Devil himself speaks to you when you sit in the chair, and some report hearing voices in their head when seated. Others say the Devil outright appears to those who sit in the chair. The best-known legend of the Devil’s Chair is that if one leaves a can of unopened beer on the bench, one can find it empty the next morning but still unopened. Other versions of the story claim that the can is completely gone or found opened in the morning.

However, there is a tale about a young man who was dared to sit in the chair at midnight on All Hallow’s Eve. His friends watched him walking into the cemetery, winding his way between the headstones, and making his way to the Devil’s Chair before he faded into the darkness of the night. That was the last he was ever seen. It seems he found his way to the chair and had a seat as the clock struck midnight. After that, he simply disappeared. Some say Satan himself appeared and dragged the young man kicking and screaming to Hell. Others say he was a victim of the vortex, swallowed up by the forces of the Earth. The truth may lie somewhere in the middle, but that somewhere is terrifying to comprehend. 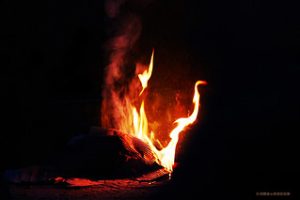 Don’t get too close, or you may be burned. Image Source

But some people thrive on fear. They seek that sudden rush of adrenaline and find the icy grip of terror amusing and strangely life-affirming. To this day, the cemetery attracts many nearby ghost hunters and rebellious teenagers looking for a thrill, many of whom vandalize the cemetery and graves, especially on Halloween. The cemetery has a nighttime security guard posted on Halloween to keep intruders away. Some of the mediums and psychics from Cassadaga are known to block the road to the cemetery on Halloween as they attempt to contact the dead.

But the Devil’s Chair sits ever within the cemetery, a hulking silent ornament awaiting someone to have a seat. Like a siren, it calls. Do you dare listen?