The Dark Side of The Wizard of Oz 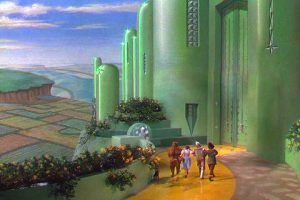 The Wizard of Oz has remained a truly classic American film since it first came out in 1939. The film’s star, Judy Darland, was launched into the stratosphere of Hollywood stardom, promising her a long and successful career as a Hollywood actress. The film is famous for its innovative Technicolor and beautiful set pieces — it was truly ahead of its time. As with most films, things weren’t always as they should be on set. Not unlike The Poltergeist, some fans of The Wizard of Oz believe that the set as well as the movie itself is cursed. Read on to learn about the dark side of The Wizard of Oz!

History of The Wizard of Oz

The Hollywood MGM studio pulled out all the stops for this classic, spending about $3 million — $55 million by today’s standards — to match the success of Snow White and the Seven Dwarfs. It worked, and the film won two Academy Awards and even earned nominations for best picture, best cinematography, art direction, and special effects.

By 1967, TIME had declared that it had become ‘the most popular single film property in the history of U.S. television.’

Despite its success, The Wizard of Oz is seen by some as unabashedly cursed. There were so many serious accidents on set that almost cost multiple cast members their lives, from the two actors who played flying monkeys crashing to the ground when their wires broke, to the Wicked Witch of the West’s stunt double injuring her left leg when the broomstick exploded.

Some of the special effects seen in the film had never been done before — there were no unions and sometimes stars were basically ‘indentured servants’ for studios.

Read on to find out about the legends of the curse of Oz!

While the story was originally intended for children, the film presents more than just a few sequences that have frightened young audiences. Behind the scenes, things were even more horrifying.

The Snow Was Made From Asbestos

The Wizard of Oz was made before CGI was a thing, so filmmakers got creative, to say the least. The beautiful scene of the gang falling asleep while it snows — the snow was nothing more than chrysotile asbestos, otherwise known as carcinogens — cancer-causing substances. Substances surrounding the cast that could, if inhaled, increase the risk of lung cancer and several other serious diseases.

Margaret Hamilton, the Wicked Witch of the West, had to film a scene where the witch disappears in a flash of smoke — the crew used real fire for this scene, and Hamilton was instructed to exit the stage via a trapdoor, but the trapdoor’s drop was delayed and the fire started before she had time to exit.

Hamilton suffered severe burns on her face and hands — her skin completely burned from her hand itself. The studio called her the next day, wondering when she would return for work — it took six weeks for her to recover, and even after returning to set, she wore green gloves instead of green makeup because the nerves in her hands were still exposed from the burns.

Hamilton’s stunt double later caught on fire while filming a scene on the broomstick. The pipe generating smoke exploded and she suffered severe burns and permanent scars from the incident.

The Original Tin Man Was Poisoned

To achieve a very metallic look, Buddy Ebsen, the original Tin Man, was painted with pure aluminum. Frequent lung ingestion of the metal sent Buddy to the hospital after he awoke one night with severe cramping in his arms and legs alongside difficulty breathing.

He was hospitalized and had to spend two weeks in an oxygen tent due to the aluminum in his makeup. Instead of being sympathetic, the studio demanded he returns to work. When he couldn’t, he was replaced with Jack Haley.

The executives behind the film kept Judy, only 16 at the time, on a strict diet and ‘pep pills’ to control her appetite. She was meant to stay slim and producers pressured her to stay in shape for the duration of the film.

Was The Wizard of Oz Cursed?

Due to the many serious accidents and misfortunes, while filming, many folks believe that the film and set were cursed. There even exists legends including the suicide of one of the ‘munchkins’ on set that can be seen in a part of the final film. While there is no hard evidence to corroborate this event, it’s truly not out of the realm of possibility on such a strange and tragic set.