Spirit Photography, A Story of Loss and Longing 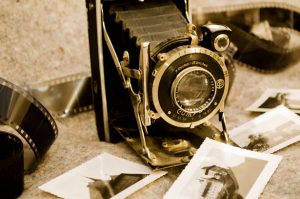 Death is so permanent, so relentless and cold, it seems. Sweeping souls far away from our world, never to be seen again. Or, can they be captured? Can a ghost truly be caught on film, especially the rudimentary film practices used in spirit photography of the 19th century?

In the post-Civil War era, most Americans were just reeling from the losses they had endured, the countless loved ones lost to the darkness of war. Enter a man named William Mumler, a pioneer in what is now known as ‘Spirit Photography.’

Mumler claimed he could capture ghosts on camera and offered these photographs as mementos, a sort of souvenir for a grieving family, a guarantee that their loved one was right there with them in the room.

Even over a century later, his eerie pictures hit hard — a photo of a mourning mother visited by the soul of her departed daughter, a young girl resting her hand on her mum’s lap… A widower, his head hanging in sorrow is seen with an unexplained glowing light, his wife, perhaps.

It’s easy to see why 19th-century people started to become enamored with the idea of Spiritualism — a movement that would soon take over social circles and give rise to the seance movement and other countercultural beliefs.

When spirit photography appeared in America in the 1860s, it was just as the torn and tattered country was coming out of the other end of the Civil War. The states were still licking their wounds after 620,000 lives were lost during the battles.

Deep in their sorrow, Americans were drawn to anyone who offered a connection, however fleeting, to the souls of their departed loved ones. Mediums began to offer seances, tarot card readers started to let the cards speak for them, and photographers like Mumler wanted to grant the wishes of widows and allow them to see their lost husbands, sons, and brothers.

Mumler was an amateur chemist and entrepreneur. He worked with silver engraving, and when he grew tired of his day job he decided to try his hand at photography, which was a new technology at the time — and a lucrative one, people would pay a dollar per portrait.

While he was taking self-portraits to practice and hone in his skills, one of his prints came back with something unusual. Although he was alone in the room, there appeared to be a figure of a girl made of light at his side.

Stunned, he showed the photo to a Spiritualist friend who confirmed that the girl in the photo was definitely a ghost.

Mumler cashed in on this happening — his photo was put into popular newspapers and people began to line up to his portrait studios to pay close to $10 to capture their dearly departed on film.

Now, there was no guarantee that a spirit would appear. Mumler did not command spirits to show themselves, they came and went as they pleased. Seems a bit coincidental, but who knows.

Mumlers photos attracted countless skeptics from the very start. People thought he had just learned how to manipulate images and superimpose one on top of the other. People began to accuse Mumler of fraud — one photo grapher named J.W. Black thought he was a con artist and was determined to catch him in the act.

He arrived at Mumler’s studio and demanded a demonstration. He sat for a portrait and watched the process first hand, including following Mumler into the red-lit dark room.

Black watched as his own outline appeared, but then another shape began to show next to him.

The shape slowly took the form of a ghostly man behind his shoulder. Black left immediately, but not before taking the print with him, clutched close to his racing heart.

Over time, the evidence against Mumler began to surface. Mumler created a photo for a woman who had lost her brother in the Civil War — she was elated, but even more so when her long lost kin arrived home alive later on. This made things pretty awkward.

A man later visited Mumler’s studio and recognized a ghost as his wife, who was not only alive and well but recently had her photo taken by Mumler — perhaps he was using old negatives and playing them off as spirits.

After things got a bit dodgy in Boston for Mumler, he refocused his efforts into the chemistry of photo development and eventually invented a process called the ‘Mumler process,’ which allowed photos to be printed onto newspapers, changing the practice of journalism forever. In this photo, this man’s deceased wife is close by his side. Source: Petapixel and Wikimedia Commons

Below is just one example of 19th-century spirit photography. One can see the detail in the image, which leads to a few more questions than answers, if you ask us.

So, what do you think? Do you believe that Mumler’s photos are legitimate? Could he have just been scamming the public in their most tender time?

Regardless, theses photos are an interesting part of the history of spiritualism, they show the lengths that folks will go to in order to make contact with the other side.

Seeing Ghosts: A Brief Look at the Curious Business of Spirit Photography