Sophia and the Haunted Harvey Library 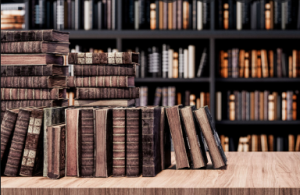 Harvey, North Dakota — a small railroad town with just under 2,000 residents. The self proclaimed gateway to the Lonetree Wildlife Area, and as the Harvey website exclaims, ‘it’s not just a place, it’s an experience!’

And that sentiment is not hard to believe, as Only In Your State’s website says this about Harvey:

“North Dakota certainly doesn’t have a shortage of unusual and unique small towns. All across the state there are hidden gems waiting to be discovered, and this town is one of them. Located in Wells County in central ND, this charming town is unlike any other.”

The city is filled with family-owned businesses and unique stores. Locals come first in Harvey, their art being displayed one each others coffee shops. Harvey is also well known for its nature, locals and tourists alike find joy in the abundance of game and fishing opportunities in the city.

But with small town charm comes history, and with history comes hauntings. The city of Harvey has seen more than a few tragedies and has been left with strange imprints and happenings that remain unexplained. But, before we dive into the spookier side of Harvey, let’s get to know the town and its players.

A Tidbit About Harvey

Harvey’s official website says this about the little town:

“The City of Harvey, North Dakota is situated at the head waters of the Sheyenne River. Harvey’s unique Dakotan connection is its proximity to the Lonetree Wildlife Management Area. Linked to the North Country National Scenic Trail, this area represents a unique wildlife management and recreation opportunity for residents and visitors alike.

Harvey is a progressive community with a country appeal. Those who live in Harvey experience a great education system, recreational opportunities for all ages, high-quality medical services, excellent city services, low-crime rate and a first-rate retirement community with weather for all seasons.

As you look around you will see a community surrounded by rolling plains, rich agricultural land and the natural beauty of the Sheyenne River. We invite you to visit Harvey and experience first-hand what we have to offer: a small town with great community spirit, big ideas for the future and an attitude of hospitality.”

Sounds pleasant! But what the Harvey website leaves out is a history of betrayal and murderous intentions. To dig deeper, let’s head to the Harvey Library. 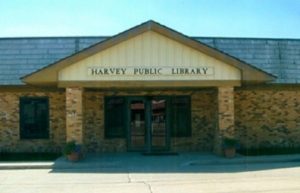 North Dakota has many sites and structures that people report to be haunted. Some are old cemeteries, an abandoned sanatorium, hospitals, and university campuses. While some of the spooky buildings are hulking structures with an air of spookiness, there’s one—noted as one of North Dakota’s most infamous haunted hotspots—that is rather inconspicuous. It’s the small public library in Harvey, North Dakota, a town about 130 miles northwest of Valley City.

A quick Google search brings up stories of strange occurrences at the library, including flickering lights, apparitions, footsteps, missing items, and computer glitches.

What (or who) could be causing all of these unusual happenings? Does Harvey just lie on a line of extreme electromagnetic energy? Is there a ‘portal’ in the town? Perhaps the spirit of a woman scorned is the cause of the library’s haunts.

The ghost, they say, is Sophia. Sophia Eberlein-Bentz lived on the site of the library when she was killed by her husband Jacob Bentz with a hammer on Oct. 2, 1931. And coincidentally, the library opened on the anniversary of Sophie’s funeral.

Horrible, we know. It’s about time we get to know Sophia.

Sophia Eberlein was born in Russia and emigrated to the United States. She was born in 1889. She later married Hugo Eberlien, a well-known Harvey businessman. The two had a couple of lovely daughters, Lillian and Alice. After Hugo’s death in 1928, Sophia remarried a man named Jacob Bentz — a mistake, if you ask us.

One night, Bentz went on a rampage of pure red-hot anger and bludgeoned Sophia while she slept. He did his best to clean up the scene of the crime and to make it seem like Sophia had died in a car accident. However, when Sophia’s daughter Lillian came back home for her mother’s funeral, she noticed blood in the house and reported her findings to local police.

Bentz later admitted the crime during the investigation and was sentenced to life in prison. He died in 1944 in the North Dakota State Penitentiary.

After her murder, Sophia’s daughters would tell reporters that Jacob relentlessly pursued Sophia until she felt she had had no other choice but to marry him. At the funeral she was a Bentz but after the crime was uncovered, Sophia became an Eberlein again and is buried with Hugo in the Sunnyside Cemetery in town.

So, one could assume that the Harvey Library’s librarian would have some experiences to share — she does.

Harvey’s librarian, Carolyn Feickert states this about Bentz and the murder:

‘He wanted her money, or something. So, he killed her. First, he tried to burn her body in the furnace, but that didn’t work — so he put her in the car, filled the car up with straw, took it outside of the city limits and set it on fire to make it seem like she died in a fiery blaze. When questioned by Sophia’s daughters about their mother’s whereabouts, he stated that she had ‘gone on a trip.’ — without her shoes.’

Carolyn says this about the alleged hauntings of the library:

‘There have been people here ghost hunting in the library, and i’ve heard many different versions of this — supposedly the bedroom was in the corner of where the office stands now. Anyhow, when the library first opened in 1990, there were some odd things that happened after the building was completed. Chairs would move, books would be shoved off the shelves, there was even supposed to have been an incident with the computer. A big ‘S’ appeared on the computer screen in the morning, in a font that didn’t exist on the computer at all. Now, the house that Sophia lived in is still in town — it was never demolished, just moved from where it originally stood. No one will rent the house, buy it, nothing. Apparently, strange things happen in the home. It’s the decrepit blue house near the armory. Several people have tried to live there, but they couldn’t stay long due to the unusual occurrences in the home.’

In the book, “Dakota Mysteries and Oddities” by William Jackson, it was stated that the library used to have extreme issues with electricity, with no known cause. Lights would come on and off by themselves, scaring visitors. People also report being touched, seeing strange orbs and flashes of light, and a feeling of dread when entering the library.

Unusual happenings started to happen shortly after the library was finished, which also happened to be the anniversary of Sophia’s funeral.

These days, the library still experiences some ghostly events, as well as the Eberlein house just a few blocks away.