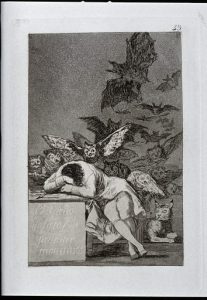 Picture it — you’re sound asleep, deep in slumber when it happens: you wake up, completely paralyzed, a menacing presence hanging over you, crushing weight on your chest. Perhaps you can see a creature in your room, a dark mass on your bed, or, as some describe it, an ‘old hag’ sitting on your chest. Sleep paralysis demons, they say, have entered your home!

Horrified, you try and scream, but you can’t. This evil entity is holding you down — the only way out of this is through, and you have to lie there in complete horror until this being decides to go away.

Have you experienced this terrifying phenomenon? Read on to learn what sleep paralysis is and why it happens!

Sleep Paralysis – How People Describe It

What is this so-called ‘demon’ that leaves you trapped within your body? For some, it’s a faceless entity trying to suffocate them. For others, it’s a creepy old witch with long, dirty claws. Others believe it’s alien abduction, and some even see the face of dead relatives during these attacks.

Samuel Johnson coined the original definition of sleep paralysis in his book A Dictionary of the English Language as ‘nightmare,’ a term that evolved into our modern definition. In Old English, the name for these sleep paralysis demons was mare, from a Proro-Germanic maron and Old Norse mara. Hence the ‘mare’ part of the word nightmare.

Sleep paralysis demons are attributed to the spells of shamans.

A vengeful spirit that suffocates enemies in their sleep.

In Fiji, the experience is interpreted as kana tevoro or being ‘eaten’ by a demon. In many cases, the demon can be the spirit of a recently dead relative who has come back to some unfinished business.

It is thought that a mouse can steal human breath at night. Human breath strengthens the mouse, allowing it longevity and the ability to become human at night. The mouse sits near a person’s face or under their nostrils, stealing their air.

Nightmares in general and sleep paralysis are referred to by the phrase ‘khar darakh,‘ which means ‘to be pressed by the Black, or when the Dark presses.’

The demon has a name in Brazilian folklore, Pisadeira, which is Portuguese for ‘she who steps.’ She’s a crone with long fingernails who lurks on rooftops at night and then walks on the chests of people who sleep belly up on a full stomach.

During the Salem Witch Trials, several people reported nighttime attacks by various alleged witches, including Bridget Bishop, that may have been caused by sleep paralysis.

In many parts of the Southern United States, the phenomenon is known as a hag, and the event is said to tell of an approaching tragedy or accident, a bad omen, if you will.

Across cultures and centuries, the strange sensation of sleep paralysis has been described. Even back in 1664, a Dutch physician published a cause of a woman with sleep paralysis — he stated that the Devil lay upon her and held her down.

Countless other cultures have stories of these happenings.

Are These Demons Real?

For some, yes. The paralysis is real. It’s called sleep paralysis, and the phenomenon of seeing something while experiencing sleep paralysis is also real. It’s called a hypnagogic or hypnopompic hallucination. These hallucinations occur when you wake up during the dream phase of sleep. During this period, your brain turns off the signals to the rest of your body to keep it from moving or acting out your dreams.

Vivid dream-like experiences, referred to as hypnagogic or hypnopompic hallucinations, can seem real and are often frightening. They may be mistaken for nightmares, which can occur while falling asleep (hypnagogic) or waking up (hypnopompic).

During these hallucinations, you may see scary people or creatures near you or even lie in your bed. And they’re often accompanied by sleep paralysis. 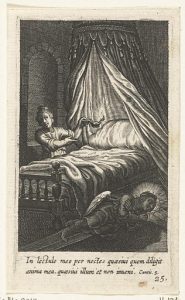 These hallucinations can happen if you’re partially conscious during the REM cycle of sleep. In that state, you’re looking at the real world but also dreaming — the perfect recipe for seeing things that aren’t there.

It’s estimated that anywhere from 1.7 to 40 percent of people experience sleep paralysis, but not everyone experiences the ‘demons’ that come along with it.

While there are ways to avoid sleep paralysis, it cannot always be avoided. It’s said that keeping a regular sleep schedule, not eating right before bed, and not sleeping on your back are a few ways to avoid a visit from a hag, demon, or hallucination.

While science can explain the phenomenon, many people believe that the paralysis is caused by an otherworldly entity — an evil spirit out to cause fear and harm.

Have you ever experienced sleep paralysis? What was your experience like?