Morris-Jumel Mansion – A Borough of Haunts 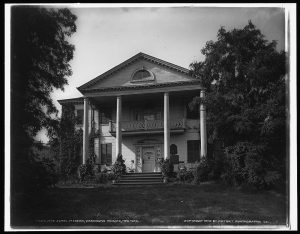 Set on a lush, green lawn at the edge of northern Manhattan, the Morris-Jumel Mansion, white and stately, seems charming enough, right? As the oldest remaining house in Manhattan, just one look at the Morris-Jumel house gives its viewer more than just a peek into the history oozing from its walls. The home itself encapsulates all that was the Victorian era in New York, ridiculously ornate architecture and all.

The Morris-Jumel Mansion was built in 1765 and collects, preserves, and interprets the history and culture of the area. The home has witnessed most of New York City’s rich history, and these days more than just the home itself watches over the borough. The Morris-Jumel House is said to be haunted — by Mistress Jumel herself.

History of the Morris-Jumel Mansion

The home was built originally for the Morris family, and takes up about 50 modern city blocks. The home later served as the headquarters for General Washington as well as the British military during the American Revolution (if that gives any indication to how old this home is)

Roger Morris, a British military officer, built the home for himself and his wife Mary Morris. They lived in the mansion for a decade, until 1775 when the American Revolution began.

Roger held the position of Captain in the British army and his wife was daughter to the speaker of the assembly, Frederick Philipse II. She was described as beautiful, fascinating, and accomplished.

During General George Washington’s time at the home, he made note of his experience there. It’s claimed that he chose the home not only because of its location, but because Mary Morris, formerly Mary Philipse, had been a love interest of his twenty years prior… scandalous!

After it acted as a tavern for many years following the war, Stephen and Eliza Jumel purchased the home in 1810 and set out to complete major renovations reflective of contemporary 19th century tastes.

Stephen was a well-to-do French merchant who had immigrated to the United States, and he had acquired the home for his wife and  his former mistress, Eliza, and their adopted daughter Mary.

Throughout her life as a Jumel, Eliza lived luxuriously. She had come from poor beginnings and was known as a woman who had sought out a higher social position.

Eliza had a troubled past — she grew up in poverty in Providence, Rhode Island, and worked as a hired servant. Eliza struggled to get to New York, but when she did, she wasn’t going to blow the opportunity. She worked as an actress and married into money, making a social leap so large that gossip stated she had manipulated Stephen Jumel into proposing.

So, he did, and she spent the rest of her life ruling that house on the hill. However, when she died, she left much of the estate to local churches and charities — much to the surprise of her living relatives.

She was always seen around men of fortune and power, but she found herself in some unfortunate predicaments. Eliza was subject to many accusations in both France and New York, one of them being her involvement in the death of her first husband. After Stephen’s death in 1832 from injuries received in a carriage accident, Eliza married the controversial ex-vice president Aaron Burr in the front parlor of the home she shared with Stephen.

The home became a museum in 1904, and has been ever since. The mid-20th century watched as the neighborhood surrounding the home became a hub for artists and celebrities such as Jackie Robinson, Paul Robeson, and Duke Ellington, who referred to the Morris-Jumel House as ‘the jewel in the crown of Sugar Hill.‘ 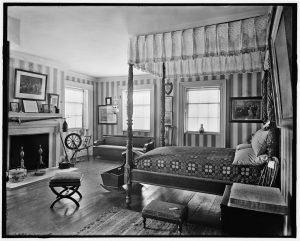 These days, the home and its neighboring structures are part of the Jumel Terrace Historical District — and because of this protection, the look of the area has changed little since the beginning of the 20th century. The home is also listed as an Individual Landmark and placed on the National Register of Historic Places in 1966.

It’s believed that Eliza Jumel has stuck around well into the afterlife. Perhaps she’s stuck earthside, guilty of her wrongdoing. Or maybe she just loved the mansion so much she can’t bear to leave… whatever the case, the Morris-Jumel House is active with ghostly happenings.

Haunts of the House

For decades, most of the mansion’s past was left to languish while the curators focused on the few weeks that Washington spent at the home. The ghosts were waiting, but there was worry that ghost stories may lead superstitious folks to attack the home.

These days, there are regular investigations of the house as people attempt to communicate with the mansion’s phantom tenants.

Eliza Jumel, the former mistress of the mansion, has been seen wandering around the home in a purple dress, tapping on walls and windows to gain the attention of visitors. Eliza and Stephen’s marriage was quite tumultuous, as Eliza was supposedly having an affair with Aaron Burr before their marriage.

The hauntings began soon after Eliza’s death in 1865. She was first seen in a white gown wandering the property and crying, but these days she’s grown weary of the home and is known to yell at passersby and schoolchildren.

Visitors to the mansion-turned-museum report hearing footsteps where there shouldn’t be any, knocking on walls and doors, voices, yelling, and strange static electricity pulsing through the air.

One report is quite stunning — a group of schoolchildren was waiting in line to get into the mansion for a tour. An elderly woman came out onto the second-floor balcony and told them to be quiet. When a member of the museum staff finally let the kids inside, they asked about the woman on the second floor — however, that single staff member was the only one inside the home at the time.

There are also rumors that a Hessian soldier died on the stairs at the mansion, and that a maid had jumped from an upper window as well. Both of these apparitions have been reported inside the home.