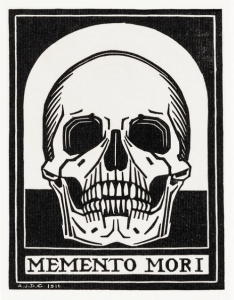 A beautiful sentiment for a pretty macabre reminder… Memento Mori:

‘remember that you have to die.’

This statement is the symbolic trope acting as a reminder of the inevitability of death. The concept has its roots in classical antiquity and Christianity philosophers and has appeared in funerary art and architecture from the medieval period onwards.

The phrase has rung out through centuries, ‘muh-men-toh-more-ee,’ the statement has most likely echoed throughout churches, cemeteries, and catacombs.

In Philosophy and Classical Antiquity

The philosopher Democritus trained himself by heading into solitude and frequenting occupied tombs. In Plato’s ‘Phaedo,’ where the death of Socrates is recounted, the idea is introduced that the proper practice of philosophy is about ‘nothing else but dying and being dead.’

The Stoics of classical antiquity were particularly prominent in their meditations on death, always remembering that they were mortal beings, unlike the gods and goddesses of mythology. Even in accounts of the Roman triumph, companions or public slaves would stand behind or near triumphant generals and remind them to ‘look behind,’ a version of the warning often rendered into English as ‘remember, thou art mortal.’

The sentiment is also seen in Judaism as ‘to number our days that we may get a heart of wisdom.’ The phrase is seen in Christianity in the statement ‘respice post te, hominem te memento,’ or ‘look after to the time after your death and remember you’re only a man.’ and on Ash Wednesday, the statement

‘remember Man that you are dust, and unto dust, you shall return.

The phrase carried over in Europe from the medieval era to the Victorian era. The prospect of death serves to emphasize the emptiness and fleetingness of earthly pleasures, luxuries, and achievements and invites one to focus on thoughts of the afterlife. Memento Mori has been an important part of disciplines across the globe. It works as a means to perfect one’s character by cultivating detachment and turning the attention toward the immortality of the soul and the afterlife. 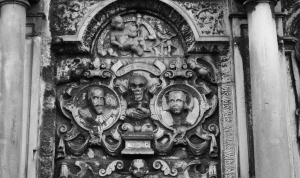 The most obvious place to look for Memento Mori is in funeral art and architecture. Perhaps the most striking of these is the ‘transi,’ or cadaver tomb, which depicts the decayed corpse of the deceased within. This came into fashion in the tombs of the wealthy during the 15th century as a stark reminder of the vanity of earthly riches.

Later, tombs in the colonial United States started to depict skulls, skeletons, and angels snuffing out candles. Another example is the Capela dos Ossos in Rome. This is a chapel in which the walls are covered with human bones. The entrance to this chapel states, ‘we bones, lying here bare, await yours.’

In Art and Fashion 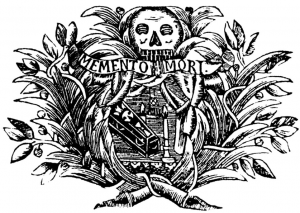 Depictions of watches and clocks have also been used to illustrate that the time the living spends on Earth grows shorter with each passing minute. Public clocks would be adorned with phrases like ‘perhaps the last’ and ‘time flees.’

In the late 16th and 17th centuries, Memento Mori jewelry started to fall into popularity. Items included mourning rings, pendants, and brooches. These pieces were dark, depicting moths, skulls, coffins, and the names of the wearer’s dearly departed.

Colonial American art depicted many Memento Mori images — it seems as if everyone, everywhere, was obsessed with death. One portrait of Thomas Smith, a 17th-century Puritan, showed the art style most Puritan people looked down upon. He fought in many naval battles and painted a self-portrait with a poem painted underneath a skull in his hands:

‘Why why should I the World be minding, Therein a World of Evils Finding. Then Farwell World: Farwell thy jarres, thy Joies thy Toies thy Wiles thy Warrs. Truth Sounds Retreat: I am not sorye. The Eternall Drawes to him my heart, By Faith, which can thy Force Subvert, To Crowne me, after Grace, with Glory.’

In Mexico, the reminder of MM is associated heavily with Dia de los Muertos, or the Day of the Dead. The theme was also famously expressed in the works of Mexican engraver Jose Guadalupe Posada, in which people from differing walks of life are depicted as similar skeletons.

Memento Mori has been depicted in Japanese Zen and samurai culture, Tibetan Buddhism, and Iceland. 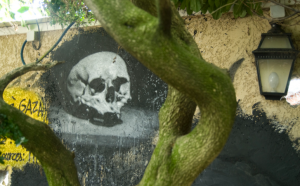 Memento Mori has endured into the modern age, with sentiments like ‘seize the day.’ Meditators and modern gurus condone the practice of remembering that death is imminent and not being worried about or bothered by that fact. Death itself is a byproduct of life. Existence is the prerequisite for non-existence or death. You cannot have one without the other. The philosopher Alan Watts stated:

‘death is not an error, it is not a failure. It is taking off a tight shoe.’

These teachers and their following widely believe that the only way to enjoy and appreciate life truly is to remember that one day death will come.

To end this article, we’ll leave you with one thought — again, from the mind of Alan Watts:

‘Everybody should do in their lifetime two things — one, is to consider death. Observe skulls and skeletons and imagine what it will be like to go to sleep and never wake up. Now, that is a very gloomy thing for contemplation but it’s like manure. Just as manure fertilizes the plants, the contemplation of death and the acceptance of death is highly generative for creative life — you’ll get wonderful things out of that.’

“Memento Mori”: The Reminder We All Desperately Need