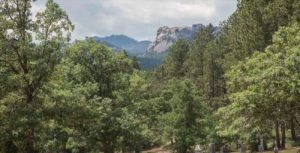 Keystone Cemetery (also known as Mountainview Cemetery) is a quaint little burying ground in Keystone, South Dakota. It’s the only cemetery in the world with a picturesque view of Mount Rushmore and has seen its fair share of activity since its beginnings back in the early 1900s.

Originally part of the Harvey National Forest, Keystone Cemetery was deeded to the Modern Woodman of America. In 1900, Patrick F. Hayes, a member of the club, laid out the boundaries of the would-be graveyard.

Tragically, the first burial was that of his daughter, 18th-month-old Catherine. She was initially laid to rest at Harney Cemetery which was abandoned that same year. The boundaries of Keystone Cemetery from above resemble an old wooden coffin, however, Mr. Hayes didn’t plan for that — it seemingly just happened by chance and was determined by the natural terrain of the land.

The front plaque at the cemetery reads:

‘Local historians have a field day with the cemetery. David N. Swanzey is interred here. Swanzey was a friend of Charles Rushmore and Gutzon Borglum and was involved with the naming of Mount Rushmore and married Carrie Ingalls of “Little House on the Prairie.”

One of the most impressive markers is that of “Wild Horse” Harry Hardin. He posed as a bearded prospector with his donkey, “Sugar Babe” and his makeup character was used to advertise Landstrom’s Black Hills gold jewelry. He told the visitors that he was a survivor of the Custer Massacre. Unfortunately, his marker indicates he was born in 1896, twenty years after General George Armstrong Custer was killed at the Battle of the Little Big Horn.

It’s reported that due to the burials and the history surrounding the cemetery, the grounds are haunted.

A Bit of The Controversial History Around Mount Rushmore

Carved on sacred Native American land and sculpted by a man with ties to the KKK, Mount Rushmore National Memorial was fraught with controversy even before it was finished on Halloween of 1941.

Mount Rushmore was meant to pay tribute to four U.S. presidents — Washington, Jefferson, Roosevelt, and Lincoln. Their 60-foot tall faces are carved into a mountainside in the Black Hills of South Dakota.

Over the years, the monument has drawn extreme protest over its location on Indigenous land. To understand why, let’s dig a bit deeper.

Before it was Mount Rushmore, the Lakota native people of the area called the granite formation Tunkasila Paha, or the Six Grandfathers Mountain. It was a sacred place of prayer and devotion, its location was considered the center of the universe for Lakota, Cheyenne, and Arapaho communities.

The region was not only spiritually important but also where tribes gathered food and plants they used in building and medicine.

In the late 1800s, Euro-American settlers began to push into the Black Hills which ignited a war with the Indigenous population.

There was a treaty signed over the land giving the Lakota people exclusive use of the Black Hills, but within a decade, gold was discovered in the region and the United States broke their treaty and took the land back.

After that, settlers and prospectors poured into the region like a thundering waterfall, and in 1884, New York attorney Charles Rushmore visited to strike a deal on a tin mine, and Six Grandfathers was eventually named after him.

By the 1920s, South Dakota was becoming a road trip destination and the Needles Highway was built — it was a scenic route winding through the granite formations of the hills.

A historian named Doane Robinson believed that the state needed to do more to entice tourists. He was well known for his involvement with the KKK when funding the Stone Mountain project, which was to be a large sculpture of Confederate generals.

He hired Gutzon Borglum, who was also brought on board to carve the faces of Mount Rushmore. Borglum passed away in 1941 and left his son Lincoln to finish the project. He hired on loads of hands, hanging precariously from the cliffside, chiseling away at its soft rock. It’s a marvel that none of the 400 workers who dangled from ropes to create the monument were injured. It’s even more impressive that nearly 450,000 tons of rock were blasted off the mountain and no one lost a finger. Funding eventually ran out, and the project was declared ‘finished’ on October 31st, 1941.

Back to the Cemetery

Many of the workers who passed away after the completion of the monument were laid to rest in Keystone Cemetery. With a rusty wrought-iron fence and a seemingly peaceful disposition, it’s what’s inside that makes it an especially haunting place to visit. 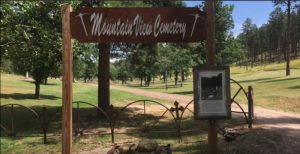 What secrets lie within the gates of the Keystone Cemetery? Source: OIYS

Several visitors report seeing ghostly apparitions walking about the gravestones. The graveyard is also well known for its phantom laughter — which some believe is the spirit of ‘Wild Horse’ Harry Hardin.

Maybe the little spirit of Catherine is restless — her body was moved, after all.

But perhaps the most interesting grave is that of Bobby Buntrock. As a boy, he played the part of Harold Baxter on the TV show ‘Hazel’ in the 1960s. He died in a car accident on the Keystone Bridge in 1974. His mother died on the same bridge a year earlier.

Perhaps the Keystone Bridge has some haunting activity as well…

Mountain View Cemetery; The Only Cemetery With A View of Mount Rushmore