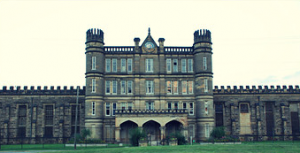 Prisons are often haunted by the spirits of those who were incarcerated within the walls of the facility that confined them. Whether they seek justice in the afterlife or their souls are imprinted within the very structure itself, phantom inmates linger far beyond the life sentences they received or long after their bodies paid the ultimate punishment of execution. Moundsville Penitentiary is a stark reminder of ghosts from the past still haunting a place even after the doors have long closed. This penitentiary held some of the most violent killers, rapists, and various other criminals, many of whom never left the institution alive. It is these unpleasant spirits that continue to haunt Moundsville Penitentiary. 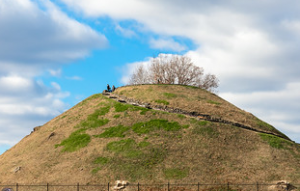 This burial mound sits directly across the street from the prison. The town of Moundsville gets its name from the burial grounds scattered around the area. Image source: Flickr.

This imposing edifice officially opened in 1876. which at that time housed 251 inmates, some of whom had been used to build the prison. Within this castle-like structure were various facilities and workshops. Outbuildings were constructed as well,  including a washhouse, bakery, and hospital inside the North Recreation Yard. West Virginia now had a state prison to house the most dangerous of criminals. However, the land on which the penitentiary was built was on sacred Native American Indian burial grounds!

If Hollywood has taught us anything, it is that you simply don’t build on Indian burial grounds. But those who constructed the penitentiary did just that! The town’s name– Moundsville– refers to the burial mounds that dotted this area. In particular, the Grave Creek Mound looms right across the street from the prison! From the very inception of the prison, inmates had reported figures moving within their cells or shadow figures seen in the hallways. The energies of spirits already occupied the land and those ghosts are still manifesting within the building to this very day! Electronic voice phenomenon (EVP) is used to record sounds, not within the normal range of hearing. Many EVPs recording within the penitentiary have documented the sounds of drumming and indigenous chants! 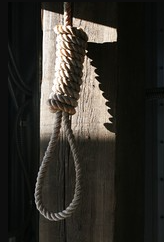 Hanging was just one of the deterrence within the prison system. Image source: Flickr

But not only did Native Americans use this site as a burial. So too did the administration of the prison. From 1899 to 1959, 94 men were executed in the prison, with 85 men executed by hanging. In a rather morbid spectacle, these executions were open to the public until June 19, 1931, when an inmate named Frank Hyer was hanged for murdering his wife. Unfortunately, when the trap door beneath him was opened, he fell too quickly, and when he reached the literal end of his rope, he was instantly decapitated. Witnesses have reported a headless translucent figure roaming the grounds of the prison, presumably the spirit of Frank searching for his head.

In 1949, electrocution replaced hangings Nine men were killed in the electric chair before the state prohibited capital punishment in 1965. At that time, executions took place in a building called the Death House, where there were four holding cells on the first floor. Although the Death House no longer stands, this area is often the site of strange lights in the night, resembling the sparks of static electricity. Could this be a phantom reminder of the device that took so many lives?

During its 119-year tenure of the Moundsville Penitentiary, approximately 998 men died in the prison; of these, 36 were homicides. An enclosed space, a large number of deaths over a very short time, human emotions of fear and anger, and murder are all catalysts for hauntings.

MURDERS WITHIN THE PRISON

Homemade weapons such as this were made by prisoners to exact revenge on fellow inmates. Image source: Flickr

The old recreation room in the basement, called “The Sugar Shack” by prisoners, was once infamous for illegal gambling, drug deals, rape, fighting, and murder. Today, visitors report hearing disembodied arguing, hushed talking, and ghostly whispering in this area. Others witnesses have heard unexplained noises and felt cold spots within the room. In addition to the recreation room, the whole basement area is said to be haunted by a maintenance man who once worked here. He was said to have often spied on the prisoners and was quick to report any news or infractions to the guards. In retaliation, he was stabbed several times with shives when he was in the bathroom. After his death, this ghost is said to wander around in the basement area, still on the lookout for illegal activity.

The Sugar Shack was nothing compared to the horrors of the North Hall. The North Hall was where the prison’s worst offenders were placed, not for the crimes they committed outside but for their violent behavior on the inside. Though they were locked down in their cells for 23 hours a day, two murders occurred there. One was a biker named Danny, who was stabbed in the eye by another inmate and died of his wound. The other was William “Red” Snyder, who was convicted of murdering his parents and dismembering their corpses. Red was disliked by many inmates and involved in several fights. In the end, he was attacked in front of his cell and fatally stabbed 37 times. The hall has been the site of many strange events, including photographic anomalies, equipment malfunctions, and the sound of cell doors banging when no one is there. Many have reported feeling very uncomfortable in this area. Red Snyder’s cell is said to be particularly haunted, his ghost leering from the shadows at anyone brave enough to approach the cell that served as both his home and his place of death.

By 1986, the prison was incredibly overcrowded with a population of more than 2,000 men. During this time, security was so loose that some described the facility as a “cons’ prison,” where most of the locks on the cells had been picked, and inmates roamed the halls freely. On January 1, 1986, when the prison was short-staffed due to the holiday, inmates in the prison rioted. At about 5:30 pm, 20 prisoners stormed the mess hall, attacking a captain, five officers, and a food service worker. During this riot, three inmates were killed. Undoubtedly, these are the spirits reported manifesting in this area, reminders of the unrest within the walls of this prison. 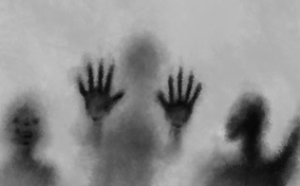 Many spirits have been sentenced to an afterlife without parole. Image source: Flickr.

It is little wonder the West Virginia Penitentiary in Moundsville is considered one of the most haunted prisons in all of the United States. This fortress of punishment may hold as many prisoners now within its walls as it did when it officially closed in 1995. The penitentiary is a testament to a pre-Civil War penal system that continued in brutality for over a century. This building is not for the faint of heart, but then again, most ghosts are not created in peace and civility. It is in the crucible of fury and violence that most ghosts are generated. There is no perfect crucible than within the confines of the Moundsville Penitentiary.