HOME » BLOG » 31 DAYS OF HALLOWEEN » HAUNTED BED AND BREAKFAST: THE OAK ALLEY PLANTATION
Posted by blogger in US Ghost Adventures For most people, the perfect bed and breakfast is homely, charming, and ideally has a very late check-out policy. But if you’re on our site, chances are you’re not the average tourist –– and your idea of going on vacation is to seek out the thrill of your life. Well…let us tell you that the Oak Alley Plantation does not disappoint. This 200-year-old place has one of the most storied, complicated histories out there, starting with the fact that, as you can tell by the name, it used to be a plantation. We can only imagine the harsh treatment that was dealt to the slaves who were kept there. There’s been plenty of added suffering since then. Many visitors report all kinds of supernatural activity here, which has made the Oak Alley Plantation one of the most haunted places in Louisiana. Let us tell you more…

Plantations in the South

Plantations are a big part of the South. In fact, some might say plantations are synonymous with the South –– there is no institution that encapsulates the region with greater accuracy. In order to understand the Oak Alley Plantation, let us tell you a bit about plantations in general and put things in context. 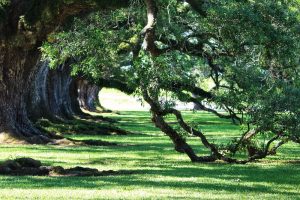 Plantations are beautiful and idyllic, at least at first glance. All those luscious trees and open skies…but there is something deeply sinister lurking under the surface. What many people forget is that behind all this beauty hides a very troubling chapter in our nation’s history. You wouldn’t suspect it at first glance, but plantations in the South were hotspots for all kinds of torture and violence.

The most common plantation type is the agricultural type, in which slaves brought from Africa were forced to perform hard labor. The temperate climate and fertile soils facilitate the growing of profitable cash crops such as cotton –– and when you add forced labor into the equation, these plantation owners were reaping some serious cash. The slaves who worked on these sites were often forced to work long and hard hours under the blazing sun. If they failed to meet quotas, they could be brutally punished with whips and the like. Women were also susceptible to sexual violence from their “masters.” All of this gruesome activity, as you can imagine, has left a painful legacy in ways more than one. The spirits of those poor slaves, for example, are said to still reside at some of these plantations, and the Oak Alley Plantation is no exception…

The horrors of the Oak Alley Plantation

Located in the town of Vacherie, right next to the Mississippi River, the Oak Alley Plantation is one of the biggest attractions in the entire state of Louisiana. The place has been around for over 200 years and has amassed quite the folklore. For example, multiple employees report feeling the touch of someone else only to turn around and find no one there. Objects are also known to fly around the mansion, perhaps because someone or something was throwing them around… 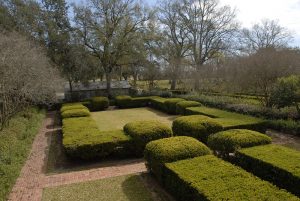 Most terrifying of all, however, are the piercing screams that cut through both day and night. Several witnesses report the sounds of small children crying without end. There are also those who have heard the chilling sound of horses…If you’re thinking about visiting, you better be prepared for a hair-raising experience that will leave you speechless.

Who is responsible for all these sounds and supernatural incidents, you might ask? It’s hard to say. But considering the amount of abuse that went on here, it doesn’t take a genius to conclude the place is haunted by some of those poor slaves who lived Hell on earth. 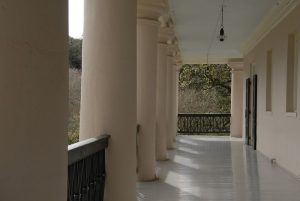 Portico presiding over the entrance to the mansion. Flickr.

Like most plantations in the South, the Oak Alley Plantation has a very twisted history. Many of the slaves who were forced to work here endured brutal treatment and were subjected to all kinds of abuse. No wonder the place is haunted, right? Visitors who stay at this plantation –– which is now a bed and breakfast –– report hearing and seeing things that refute any logical explanation. The nearby foods are also full of strange creatures that are hard to identify…one thing is for sure: the Oak Alley Plantation is not as peaceful as it might seem at first!