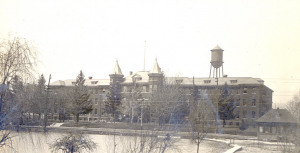 This sprawling complex operated from 1839 to early 1982. Starting out as a poor house and farm, it eventually developed into an asylum, sanatorium, and then a hospital. In 1832 it was known as the Wayne County Poorhouse. This was actually quite common at the time, as mental illnesses were not fully understood and many poor souls could not work due to their illnesses. So these folks ended up in poorhouses around the country, provided food and shelter but no real medical treatment for their conditions. Those who lived in these Poorhouses were referred to as inmates. Their lives were filled with the drudgery of daily labor and little comfort for their afflictions. In 1913, however, this Poorhouse became known as the Eloise Mental Hospital, and there were actual attempts at treating mental illnesses as a medical condition. 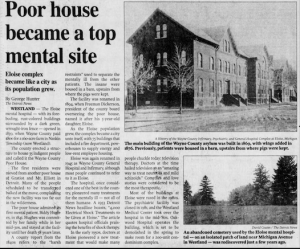 In its prime, Eloise consisted of 78 buildings on 902 acres with 10,000 patients along with 2,000 staff. It was the largest psychiatric facility in the United States. This complex was self-sufficient,  having its own police and fire departments along with a railroad and trolley system. It included a bakery, amusement hall, laundry facility, post office, and a power plant. It had its own farm which included dairy cattle, a piggery, a root cellar, a tobacco curing building, and greenhouses. The Poorhouse philosophy that manual labor was indeed therapeutic continued in the hospital setting.

But Eloise also serviced Michigan as a fully functional hospital as well. Patients came from Detroit and other communities to have x-rays. This facility also housed the first kidney dialysis unit in the State of Michigan and pioneered the use of music therapy. Insulin was used to treat people at this hospital. In many ways, Eloise was a model of scientific advancement in the medical field.

Unfortunately, the advancements in mental health were not so swift. The use of shock therapy was employed at Eloise, which was a technique used in psychiatry to treat depressive disorders or other illnesses, by inducing seizures or other extreme brain states. It was started in the 1930s and used electric shock to cause seizures that often left the patient in a vegetative state. But this was when mental health research was in its infancy so many patients were used as guinea pigs by the doctors. As it happened, Eloise had many patients on which to practice.

As the years went on the institution grew larger and larger, a reflection of the increase in the population of the Detroit area. From only 35 residents in 1839, the complex grew to about 10,000 residents at its peak during the Great Depression in the early 1930s.

Out of the pain and confusion contained within Eloise spawned the ghosts of lost souls begging to be treated as human beings. This facility would become a place of fear, a sanitarium of torment for those with mental health issues. Keep in mind, during this time, many people were committed to such facilities with no mental health condition whatsoever. Many unfaithful women were committed by their husbands. Masturbation was once considered a confineable mental illness. These people, with no true disease, would be locked up with those who were in dire need of treatment. Out of this hellish confinement came all the necessary elements to produce the hauntings happening at Eloise today.

THE GHOSTS OF ELOISE 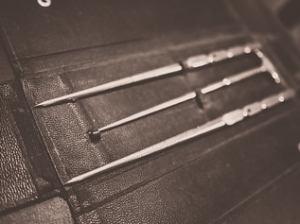 Tools such as this were used to perform a lobotomy. The sharp end of the instrument would be hammered into the skull usually at the soft point near the eye. If this operation did not kill the patient, most were left in a vegetative state. Image source.

Now Eloise stands as a mere shadow of its grandeur. But within the crumbling walls is the memory of lives lost in the facility as well as a few ghosts who refuse to leave. Some claim that ghosts will remain if there has been an injustice done during their life. Sadly, this may be the reason for some of the hauntings. Numerous poltergeist activities have been witnessed within the Eloise complex, with doors slamming and medical carts and tables being overturned. A frustrated spirit seeking to be noticed? Possibly. Of course, there are the shadow figures that seemingly drip from the ceilings and ooze from the walls of this place, these ghosts actually become part of the building itself until they are one and the same.

Two ghostly children have been seen running the paint-peeling walls of the hallways, turning a corner only to disappear. It is assumed they were inmates at the time Eloise was a Poorhouse, where orphaned children often lived until they were adopted out or died. It would have been a life of toil for a child, confined with adults, many with devastating mental disorders. Possibly they died in their youth or maybe they relive their lives now as children without the fear they had when they were alive, carelessly playing games in a kind of purgatory.

A lady that appears as a white vapor has been seen manifesting within one of the buildings that still stand, even her voice has been recorded as she whispers “help me” from beyond the grave. A residual spirit, her impression seared into the building itself, a haunting reminder of those who were confined here who wished only to be heard.

Another ghost is that of a doctor, said to prowl the halls of the crumbling facility. Even in the afterlife, he searches for an unfortunate patient to practice his scientific methods. Some have reported seeing a specter drenched in water, possibly a reminder of when hydrotherapy was coming into practice. A patient, against their will, would be placed into a pool of water, often with their arms and legs restrained. Other times the phantasm is seen wearing a smock stained with blood, presumably from a lobotomy. In the 1930s, lobotomies were beginning to be performed. A doctor would hammer a surgical instrument through the skull and into the brain with the hopes of cutting off negative impulses.  Some patients died as a result of the operation and others later committed suicide. Some were left severely brain-damaged. This all happened within the Eloise complex and this doctor is a testament to the treatments. Possibly he lingers here, tormented by the ghosts of the patients upon whom he practiced. Whatever the case, he is part of a long litany of spirits who still reside within Eloise.

AN END TO THE OLD WAYS

Slowly Eloise’s population decreased. The farm operations ceased in 1958 and some of the large psychiatric buildings were vacated in 1973. The psychiatric division started closing in 1977 with the last patients being transferred out in 1982 when the State of Michigan took over. The general hospital closed in 1986. When Eloise operated as a mental hospital, there was an intention to use the scientific method to treat mental illnesses, but these treatments were brutal and, in retrospect, barbaric. Those who suffered and died gave their lives to improve the future treatment of those with mental afflictions. Eloise stands as a silent testimony to times past. It is her ghosts that tell the tale if we choose to listen

Clark, Alvin C. (1982). A History of the Wayne County Infirmary, Psychiatric, and General