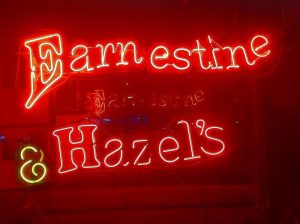 Located in Memphis, Tennessee, Earnestine and Hazel’s has seen it all. The building was originally a church, then a pharmacy, later a sundry store, then a jazz cafe, later a brothel, and finally just your local bar –– so many spirits have passed by that it’s hardly a surprise the place is haunted. But that hasn’t stopped the place from being a popular destination. Ever since it became an entertainment venue, the place has hosted big-time celebrities such as Sam Cook, Tina Turner, and Aretha Franklin, just to name a few. But there are also other kinds of visitors who are said to call the building home. They roam the upstairs rooms, mess with the jukebox, and play the piano. Their faces plaster the walls and send people running for the hills. And that’s just the light stuff.

Tennessee is filled to the brim with great music, history and haunts. Looking to experience it all for yourself? Join us for a Nashville ghost tour and get to know the spirits of the Music City in a whole new way!

Other Spooks in Tennessee

Earnestine and Hazel’s might be one of the most haunted locations in Tennessee, but it certainly isn’t the only one. Who would have thought that Taylor Swift’s hometown is quite the haunted forest? Nashville has maybe more haunted spots than it does country singers, and we all know that is saying something.

The Walking Horse Hotel is one such example. Located just an hour outside Nashville, this is where Union soldiers used to release moribund Confederate troops. Many of the captive soldiers were seriously ill and on the brink of death, so most of them died while on the property. Their ghosts are said to still linger at the hotel –– just ask any of the guests who have seen ghostly figures peeking at them from their own rooms. Guests also report hearing horse hooves on both the ground floor and the upstairs hallway. Good luck trying to explain the “no pets” policy to these sinister spirits…

While you’re in the area, we also recommend the Hermitage –– President Jackson’s resting place and his former residence. According to public records alone, as many as 482 deaths have occurred on the property, and we can only imagine the number is much higher when you include the slaves who were worked to death on site. Visitors report all kinds of ghostly phenomena, but what particularly spooks people is a whistling sound that makes them feel surrounded by very sinister energy.

Earnestine and Hazel’s has been a centerpiece of Memphis from the beginning. Before it was a bar, however, the building was a church. Then, in the 1930s, the place became a pharmacy until the owner invented a gel-type hair product that made him rich. Satisfied with his new fortune, he very generously decided to give the building to two hairdressers who were using his product, Earnestine and Hazel.

Soon thereafter, Earnestine and Hazel’s turned the building into a cafe that was frequented by the celebrities who performed at a nearby music joint owned by Earnestine’s husband. Fast-forward to 1992 and the bar became what it is today. But the bar hasn’t always been your local mom-and-pop shop. There used to be a brothel upstairs where people used heroin with abandon. According to the rumors, many prostitutes were killed there and their spirits still haunt the upstairs section of the building, where sometimes a piano can be heard playing out of nowhere.

Now just a regular, local bar, Earnestine and Hazel’s brings the town together. People drop by to find great music, great food, and, most importantly, a good time –– even if it means hearing weird noises and feeling strange sensations.

Earnestine and Hazel’s has a long history of strange happenings. It is believed that in addition to the prostitutes who were violently murdered there, a previous owner by the name of Ray Charles committed suicide upstairs. Today, most employees avoid the area and mainly work in the lower levels, doing their best to ignore everything they hear above their heads, including sounds of people walking around and even having conversations. One day, a guy who had been working there for 15 years went upstairs and saw something that made him come back down, running at top speed and out of the bar. He never came back to work, terrified of whatever it was he saw.

But downstairs is hardly any better. Employees report that the jukebox will often turn on by itself, sometimes to a song related to the conversation. On the day of James Brown’s passing, for example, two co-workers were talking about his death when “I Feel Good” started blasting. The lights are also known to play tricks on people –– sometimes they dim very low, other times they brighten up almost enough to blind people in plain daytime.

Tourists who come looking for evidence hardly leave empty-handed. You can see weird orbs and shapes in almost every photograph taken, almost as if the camera is struggling to capture whatever is roaming the building. You can even see human faces on the walls in some of the pictures –– not a very pretty wallpaper. Most terrifying of all, however, are all the voices and chatter you can hear but can’t quite make out. Sometimes it even feels as if they are gossiping about you, and maybe they are. It wouldn’t be Earnestine and Hazel’s without the gossip of a hair salon.

Fun Facts about Earnestine and Hazel’s

Earnestine and Hazel’s is one of the most popular spots in all of Nashville. And while you might think you know enough about the place by now, there’s still a lot left to be said. Let us share some quirky facts about this beloved bar.

It’s hard to summarize Earnestine and Hazel’s. Part of what makes the place so frightening is that it is simply hard to pin down. What exactly haunts the old dive bar? That’s hard to say. It’s likely the spirits of the prostitutes and other people who died there, but who is to really say? The one thing we can all agree on is that you shouldn’t go upstairs for any reason –– especially if the piano music is luring you.