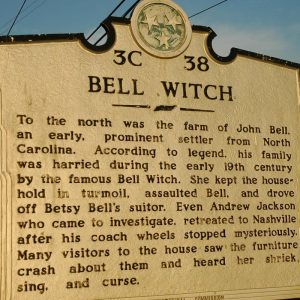 Most haunted places in America are frightening precisely because of their mystery. Why are there odd noises, funny smells, or inanimate objects that move by themselves? Who is the ghost tormenting the place, and what does it want? That isn’t the case with Tennessee’s Bell Witch Cave. The infamous Bell Witch tortured the Bell Family from 1804 until 1820, focusing most of her curses and abuse on John Bell, the family’s patriarch. The stories of her torment were so famous that then-future president Andrew Jackson stayed on the property to investigate. He reportedly said, “I would rather face the entire British Army than to spend another night with the Bell Witch.”

After John Bell’s death, the Witch laid low for several years but promised she would be back. In the centuries since, odd happenings have intermittently occurred on the farm, specifically in the cave where she’s said to reside.

The origins of the Bell Witch are not precisely clear. Some rumors say that the Witch herself once announced she was the spirit of a person whose body was buried in the area; and that she was looking for a tooth underneath the home. The Red River community where she was active did have some Native American burial mounds by other accounts; however, the Bell Witch’s antics started one sunny day.

Like every good story, it all started on what appeared to be a regular day. The year was 1817, and John Bell, a farmer who moved his family from North Carolina to the Red River community in Tennessee, was out in his fields. Then, out of nowhere, he saw something that caught his attention: a strange animal with a dog’s body and a rabbit’s head. The poor man quickly shot it, and the thing just vanished. It’s possible that the creature was the Witch herself and that John terribly upset her or that she had already picked on John as her target. Either way, Mr. Bell’s life changed forever that day –– and he had no clue.

It didn’t take long for the Witch to start tormenting John Bell and his home. That very same day, in the evening, the family started hearing beating sounds outside their log house. A few weeks later, the family’s children reported rats gnawing at their bedposts; their sheets were pulled off, and their pillows were thrown to the ground by some invisible being.

Even more terrifyingly, the Witch’s haunting only got worse. The Bell family began hearing a voice that sang hymns and cited scripture in what was a sacrilegious gesture. On one terrifying occasion, the voice recited two sermons that had been delivered earlier that day at the same time and 12 miles apart. Keep in mind that this was in the early 1800s, and they didn’t have radios yet, so hearing a voice coming out of nowhere must have been a wacky experience. Overwhelmed and utterly lost, the family confided in a close friend who began experiencing similar things at his own home after visiting the Bell residence. To the dismay of everyone involved, things were only going to get worse.

Does anyone enter a wedding and object to the marriage in real life, like in movies? Well, in 1800s Tennessee, the Bell Witch did precisely that –– except it wasn’t as humorous as you would think. Quite the opposite, in fact, and very tragic since the almost newlyweds were happily and blindly in love.

Betsy Bell, John’s daughter, was a lively young girl who became engaged to Joshua Gardner. The Witch objected to their union, and she quickly unleashed on poor Betsy all kinds of physical and emotional abuse, including slaps in the face and fainting spells. On one horrifying night, young Betsy was sent to a neighbor’s house for a break –– little did she know the Witch would follow her there. Betsy was startled by a soft voice that said, “Betsy, you should not have come over here; you know I can follow you anywhere. Now get a good night’s sleep.”

The Witch’s reasons are unclear, though some believe one of Betsy’s former teachers, Professor Richard Powell, is to blame. He was obsessed with young Betsy –– despite being many years her senior –– and was a practitioner of the occult; maybe he asked the Witch for a special favor. Regardless of the reason, the Witch eventually terrified Betsy into calling off her engagement. Unfortunately for the Bell family and the entire town, that was not yet the end.

A Kiss of Death

Betsy was tormented by the Bell Witch –– but her poor dad had it even worse. It wasn’t long before the Witch came into the picture that Mr. Bell started suffering from mysterious and concerning ailments. But his deteriorating health couldn’t have been a coincidence –– the Bell Witch made it clear multiple times that she was going to kill him.

Mr. Bell experienced many concerning things, including twitching episodes on his face. These episodes made it challenging to eat and swallow, and they lasted almost a year. Old Jack Bell –– that’s what the Witch used to call him –– continued to suffer deteriorating health, including seizures. The Bell Witch took no mercy on him and continued taunting him. For example, she would slap his face and remove his shoes when he tried to walk. Finally, one cold morning in late December, Mr. Bell passed away in his sleep –– free at last from the Witch’s torture, or so we hope.

The Bell Witch disappeared immediately after Mr. Bell died, almost as if her job there was done. She did, however, promise to return seven years later –– and the evil spirit kept her promise. The Bell family was again plunged into horror years later; however, just as quickly as it began, it suddenly ended. Since then, the Witch has teased her return and continues to make her presence felt every once in a while.

It is unclear why the Witch targeted them specifically or why she continues to haunt the area. Rumor has it she lives in a nearby cave where paranormal activity has been reported. Curious visitors before the digital camera, for example, reported difficulty taking photographs of the place, almost as if they didn’t want to be seen.