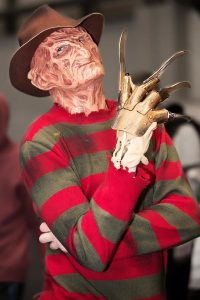 A Nightmare On Elm Street is Wes Craven’s panic-inducing horror flick that left tired teens haunted by the terror that is Freddy Krueger. Wes Craven recently shared details about where in the world he got the idea for a boogeyman who kills people in the night, and the way he describes it, he came up with the idea for A Nightmare On Elm Street after reading an article in the L.A. Times about a family who had survived the Killing Fields in Cambodia. They made it safe and sound to the United States, but their young son was soon terrorized by horrible nightmares and was eventually found dead.

A Nightmare On Elm Street follows four teenagers living on one street in Springwood, Ohio. A monstrous spirit of a child murderer invades and kills them in their dreams, and then they die in reality. The bladed leather glove killer, Freddy Krueger, seeks revenge on the kids whose parents were responsible for his demise. 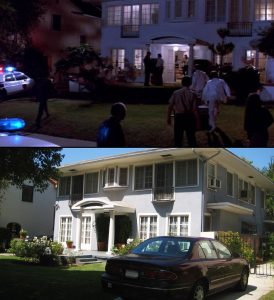 This home was part of the filming of ‘A Nightmare On Elm Street.’ Source: Flickr

As Wes Craven puts it:

‘He told his parents he was afraid that if he slept, the thing chasing him would get him, so he tried to stay awake for days at a time. When he finally fell asleep, his parents thought this crisis was over. Then they heard screams in the middle of the night. By the time they got to him, he was dead. He died in the middle of a nightmare. Here was a youngster having a vision of a horror that everyone older was denying. That became the central line of Nightmare on Elm Street.’

So, to understand the true terror of this infamous flick, we’ll have to dive deep into the horrific history of the place and time that inspired it.

History of the Killing Fields of Cambodia

The ‘Killing Fields are several sites in Cambodia where more than one million people were killed and buried by the Khmer Rouge regime of the Communist Party of Kampuchea during its rule of the country from 1975 to 1979.

The mass killings are regarded as part of a broad state-sponsored genocide. Analysis of 20,000 mass graves indicates at least 1,386,734 victims of execution buried deep beneath the soil in the fields. Estimates of the deaths resulting from the Khmer Rouge regime range from 1.7 to 2.5 million people. 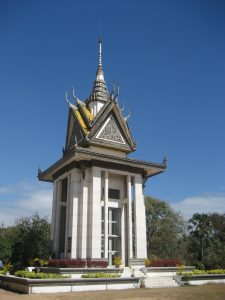 In 1979, Vietnam invaded and toppled the Khmer Rouge regime, ending the genocide.

During their reign, the Khmer Rouge arrested and executed everyone suspected of connections with the country’s former government, foreign governments, and intellectuals and professionals. Thai, Vietnamese, Chinese, Buddhist monks and Cambodian Christians were the targets of persecution.

Under the Khmer Rouge rule, a Cambodian double agent working for American and Cambodian special forces was stationed near the Cambodian and Lao borders. His name was Bounchoeurn Sao, and he eventually was moved with his wife and children to Battambang province.

The Khmer Rouge began its systematic indoctrination of Cambodian citizens, and because Sao was sent to Phnom Penh shortly after the Khmer Rouge takeover, he was separated from his family. Along with millions of others, he and his in-laws were evacuated from Phnom Pen on foot and traveled by boat to the Takeo province, his birthplace.

In January of 1976, Sao succeeded in reaching the Thai border and eventually arrived at a refugee camp in Surin, Thailand. After searching for his wife and children for two years, he met a woman named San Bounriem. They eventually married and found their way to Washington State as a part of a wave of refugees in the late 1970s.

A Nightmare Comes To Life

Now with a son, things were going well for the family until he started to have disturbing nightmares for no apparent reason. The child stayed awake for days at a time, worried that if he did fall into a slumber, the thing chasing him would ‘get him.’

When he finally fell asleep, his parents thought the crisis had ended. Then, they heard screams in the middle of the night, and by the time they got to the boy’s bedside, he was dead.

There are many other reports of people dying in their sleep in the late 1970s in America. There was even a medical condition coined ‘Asian death syndrome’ as most of the people affected by this phenomenon were of Southeast Asian descent. The victims would suddenly scream in their sleep and die shortly after.

There isn’t much knowledge of this phenomenon to this day.

Horrifying and tragic, truly. What could have caused this young boy and many others to perish for no apparent reason in the midst of their slumber? Could the negative energy brought over from his parent’s time in Cambodia have created some dangerous entity that ended up taking their child’s life? Or is there a medical reason behind this ‘sleeping sickness?’

We may never know for sure.