Before there was Christmas, there was Yule. Yule refers to a midwinter festival celebrated during the time of the Winter Solstice that, in some form, was observed for thousands of years in Germanic and Nordic countries and is still very much alive today. As much as Christmas is about the birth of the Christ Child, Yule was an agricultural celebration providing us with all the holiday trappings. Did you put up a tree this year? If you did, you are observing Yule. How about hanging a wreath? Lighting a candle? Steal a kiss under a sprig of mistletoe? Well, then, you have Yule to thank for all of these occasions.

Join us this holiday and gift a tour with US Ghost Adventures!

A Supernatural Time of the Year

But what makes Yule so unique? It is rather interesting that the first day of summer is called midsummer, and the first day of winter is called midwinter or the Winter Solstice. It is because the Pagan people comprised agricultural societies, and the entire culture centered around the growing seasons midsummer was halfway through the growing season. Midwinter was halfway in the calendar until planting would resume. Midwinter meant the darkness was about to give way to light, death would once again relinquish its icy grip on the world, and life would slowly return. This time was a pivotal point when people looked forward to the future. But Yule also had a few ominous overtones as well. At this particular point in the year, there was a collective trepidation about the past, present, and future. Just as midsummer was associated with the supernatural, so too was midwinter. Ghosts ravaged the world outside, beyond the warmth of the fire. Demons could be discerned in the howling wind. And death was everywhere.

Because agriculture was so important, it is little wonder that plants and other greenery were used as decoration. Evergreens were cut and gathered from the woods near villages and brought inside to symbolize life and rebirth. Because the evergreen was, well, evergreen, even in winter, it was believed to have special powers against the supernatural. Evergreens were believed to keep death away, and in a time of extreme cold and meager rations of food, that was a kind of superstition that continues even to this day. It was also believed that evergreens encouraged the rebirth of the sun. So evergreens were thought to hasten the warmth of the coming Spring.

Holly was used to capture or ward off evil spirits. Holly would be placed at an entry point of the house so ghosts and demons could not enter. The leaves would come to be seen as symbols of hope in the coming year, and the berries were seen as a harbinger of the fertility of the land.

Candles we see in churches today also figure prominently in folk beliefs regarding ghosts and supernatural visitations. Originally a candle was lit to appease the sun to return. In a bleak midwinter, this seems entirely appropriate! But Pagan belief also saw the candle as a powerful talisman. It was believed the glow drove evil away. The same way we put a candle in a pumpkin to make it a jack-o-lantern was the same reason why churches used candles—to drive the darkness away and everything that called the dark its home. History does not exist in a vacuum, so from pagan origins comes what we see today and take for granted.

Silver bells also have their origin in the Pagan past during the Yule season. The sound of a bell has been believed to drive away evil and ghosts for thousands of years. And using silver, well, you are just taking precautions. Silver chases away ghosts and demons, and even werewolves. Silver is the bane of the supernatural. So when you hear the peal of the silver bells, you know you are safe.

Even the traditional Christmas colors have their foundations in Pagan belief. This is the time of year when we see everything covered in greens, silver, and red. The color red in Pagan agricultural cultures represented the waning Holly King. This king was a vegetative nature spirit. Like the holly present this time of the year, the Holly King was soon disappearing from the land. But that is a good thing! The Oak King, another nature spirit, was taking its place. This was symbolized by the color green, the hope of the coming Spring. The color white represented the hope for new light from the sun that was still a few months away from taking over the darkness of winter. Silver represented the Moon, And the color gold represented the sun. All common colors associated with Christmas now, but the roots stretch back to the Yule celebrations. 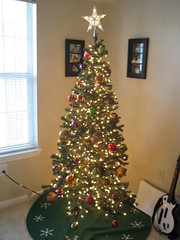 Our modern Christmas tree is a remembrance of the Pagan Yule log. Image Source

The Pagans, during this time of year, would bring in the Yule log. The Yule log was an ash or oak tree that would be burned throughout the Yuletide. The Yuletide lasted for 12 days hence where we get the 12 days of Christmas. This Yule log was kept burning to keep evil spirits from entering the home. The longer the Yule log burned, the faster the sun would return to warm the earth, or so it was hoped.

Eventually, the Yule log would be replaced in many cultures with the Yule tree, possibly as early as 1500 years ago, which was brought into the house, and instead of burning it to ash, it was instead decorated. This tree represented life returning to the home and hopefully to the world. It would gradually be decorated with effigies of gifts people wanted from the gods. Sometimes they would pray to the god Odin to visit them with these gifts. Many places in Europe, even after Yule celebrated the birth of Christ, would decorate their Yule trees with objects gathered from nature, such as berries and pinecones. But it was Martin Luther, the founder of the Lutheran religion, who is credited with one familiar touch. It is said, in the 16th century, as he made his way across a winter landscape as he composed a sermon, Luther saw evergreen trees against a backdrop of twinkling stars. That gave him an idea. He went home and put lit candles on his Yule tree.

While manufactured Christmas tree ornaments were not introduced until the 1800s, we know that trees were decorated with fruits such as apples and oranges. There may have been a Biblical theme for this practice—the fruits may have been used to call to mind our sins and remind us of the forbidden fruit of Eden. Or, in an agricultural society, it may have been a reminder of better things to come. One historian suggests that the Christmas balls we use now are carry-overs of witch’s balls that were placed on trees. Witch’s balls were made since the 1600s in England, created from blown glass and made in multiple colors. The witch’s balls were a common folk practice used to ward off evil spirits and spells. 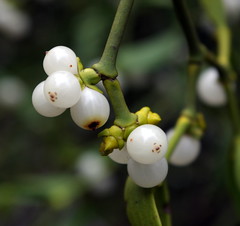 Mistletoe has an ancient tradition associated with peace and fertility. Image Source

Mistletoe has very Pagan origins. The war would cease if two armies met and mistletoe was found near where they battled. Only the Druid priests could collect mistletoe and used a silver knife to gather it. Mistletoe was a symbol of peace and fertility, as can be seen in the tradition of kissing under it.

Odin is Coming to Town 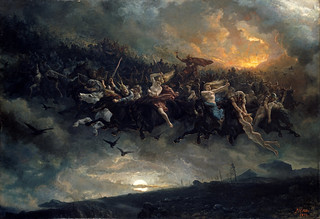 In Germanic and Nordic cultures, the wild hunt would ravage the land this time of year, led by the All-Father Odin carried in a sleigh pulled by two flying goats. Image Source

One such legend that was known in Germanic Europe and the Nordic countries was something known as the Wild Hunt. In European folklore, this was when the Pagan God known as Odin would sweep across the winter landscape with faeries and otherworldly beasts in attendance. Anyone caught up in this onslaught was never to be seen again. Of course, this tale was a cautionary warning and a personification of the howling storms of midwinter. In a time without electricity and cell phones, anyone stranded out in the open was surely in dire peril. Caught out in the wilderness during a blizzard would cause one to get disoriented, and once lost, you wouldn’t be found until the spring thaw. Don’t forget, just outside these villages was the domain of wolves and bears. Your body may not have been found at all! But, believe it or not, our first glimpse of the figure that would become known as Santa Claus comes out of this myth.

The Wild Hunt had its origins as far back as 2 BC. Odin, the All-father as he was known in Pre-Christian cultures, was a white-bearded man dressed in furs and often depicted as stained in the blood of those he defeated. Odin was the leader of this wild hunt. It is believed that this figure of Odin, who visited the earth during Christmas, became Father Christmas in English traditions. No longer was he a bloody conqueror but a benign fatherly figure. His bloody garments transformed into the red coat that we see today. In fact, this Father Christmas figure gained popularity in the 15th century. But it was after the English Civil War, during the restoration, that Father Christmas became a permanent figure in British culture. 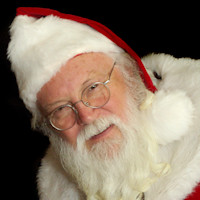 From Pagan origins to modern commercialism, the character we know as Santa Claus has a fascinating and lively evolution. Image Source

So as we open presents and drink our egg nog, maybe give a bit of a nod to those Pagans who hope at this time of the year. The sun sets a little later every day as we prepare for the long days of summer. The Christmas tree reminds us that life will indeed return, and the hopelessness of winter will soon thaw. Christmas and Yule are about preparation and expectation. These holidays remind us that life goes on. We see this represented in the Christmas wreath, a Pagan symbol of the Wheel of the Year that is constantly turning, with season giving way to season, with birth giving way to death and back again. These are not simply pagan beliefs but universal truths.

And that is something we can all agree on with a toast of egg nog! We here at US Ghost Adventures wish you a very happy Yule.

Collins, Ace. Stories Behind the Great Traditions of Christmas. Zondervan, 2018.

Green, Jonathan. Christmas Miscellany: Everything You Wanted to Know About

Morrison, Dorothy. Yule: A Celebration of Light and Warmth. Llewllyn, 2000.