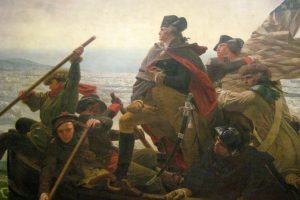 “Twas the night before Christmas and all through the house. Not a creature was stirring, not even a mouse.” We all know the unmistakable tale of peace and goodwill towards men. But on December 25th, 1776, George Washington threw those ideals out the metaphorical wreath-draped window. The night before Christmas was not calm for Washington: he was occupied with an attack on Trenton, New Jersey. The Hessians, German mercenaries hired by the British, had taken the city. Morale was low within the Continental Army, despite the holiday cheer. Poorly trained and outnumbered American troops were struggling against the mighty British empire. Washington, a veteran of the Seven Years War, had become Commander in Chief of the newly formed Continental Army in 1774 and looked to inspire his withered and worn warriors. While the outcome of his efforts is seen today as a well-orchestrated charge against the British: they were more of a stumble, ending in a graceful landing. Nevertheless, when George Washington crossed the Delaware on Christmas Day, 1776, it planted the seeds for American victory and continental freedom. US Ghost Adventures highlights this forward flail toward victory in the well-researched sections below!

Learn more about George Washington and book a tour with Atlantic City Ghosts and Alexandria Ghosts! 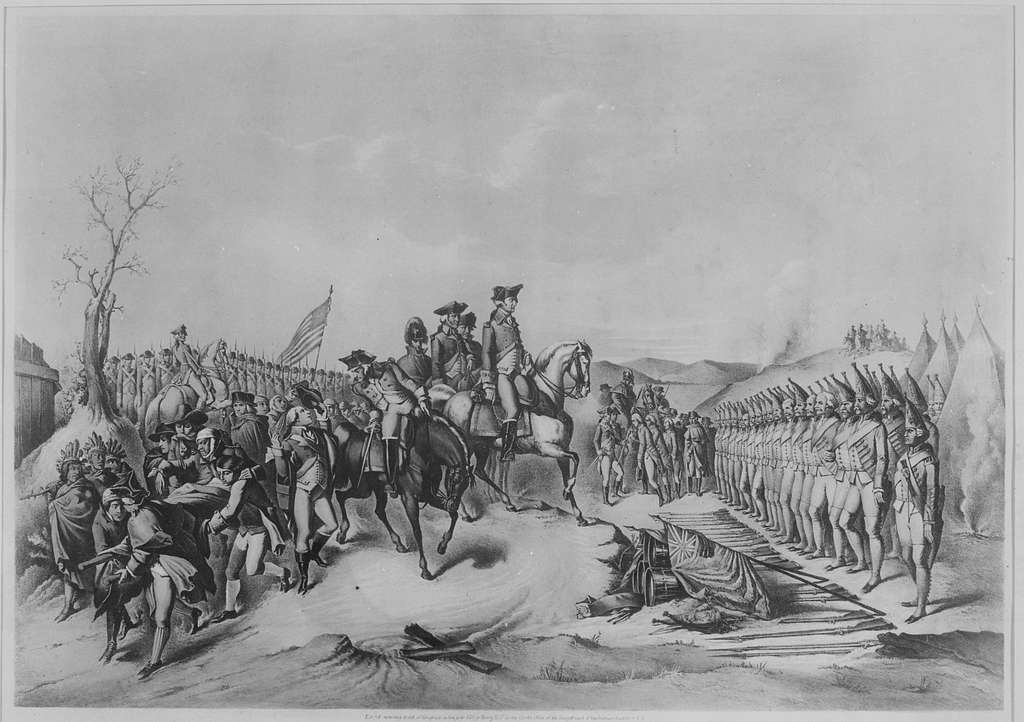 The Hessians had become a powerful force in the Revolutionary War. Over 30,000 Germans were hired by the British to help quell the uprising in the colonies. In contrast, on its second iteration, the Continental Army, the first coming in 1775 at the outbreak of the war, consisted of a poorly trained 17,000. That year the army reached its highest enlistment point at 89,000. However, many of these were reenlistments, and half were untrained militiamen. These 30,000 Hessians were, in addition to 22,000 British soldiers and 25,000 Americans, loyal to the British crown, serving throughout the war. It was not just the sheer numbers that stacked the odds against the Americans. Experience, training, and equipment played a large factor in the initial losses incurred by the Continentals. The Hessians themselves were a dangerous breed. Hailing from the Hesse-Castle region of Germany, where young boys were enlisted in the military starting at the age of seven, they were some of the finest warriors in Europe. Unless one had an occupation deemed important to society, such as a lawman, politician or of the mercantile class, they were to be enlisted for active duty between the ages of 16 and 30. Hessians were trained with an iron fist and had a penchant for plundering valuable goods from Americans. Making them a much-hated enemy among revolutionaries.

Washington knew that Christmas night would bring much revelry and that the Hessians would be fully imbibed come morning. While the rest of the western world was in relative peace, Washington was planning to bring his troops out of the moral muck they had found themselves wading in. This had been a plan long in the making, with several councils of war being held beforehand. 1,400 Hessians troops were stationed at Trenton. A relatively small number in the large scheme of things, but Washington hoped a victory would boost morale and encourage more colonialists to join the revolutionary effort in the following year.

Washington’s initial plan was grandiose in nature. Enlisting the help of two other commanders and their regiments, he had planned to cross the Delaware in three separate locations. These plans were not executed as he had hoped, however. The freezing temperature of a New England winter had frozen the Delaware, highly delaying the well-thought-out attack. Colonel John Cadwalader was to take his troops, 1,200 continentals, and 800 militiamen, from Philadelphia to Burlington, New Jersey. Stopping any Hessians from responding to the attack and moving north towards Trenton. In addition, General James Ewing was to take 800 militiamen across the river to take up positions along the Assunpink, to prevent a full retreat. Washington himself would lead the main attack with a force of 2,400 men, surpassing the Hessians at dawn. While this all sounded well and nice, the frozen ice waters of the Delaware prevented the first two regiments from reaching their destinations. Many of Washington’s troops arrived at the start location late, uninformed of what they were doing as Washington had kept it a secret from his troops, and the crossing was delayed three hours. What was supposed to be a force of nearly 5,000 thinned down to half that. 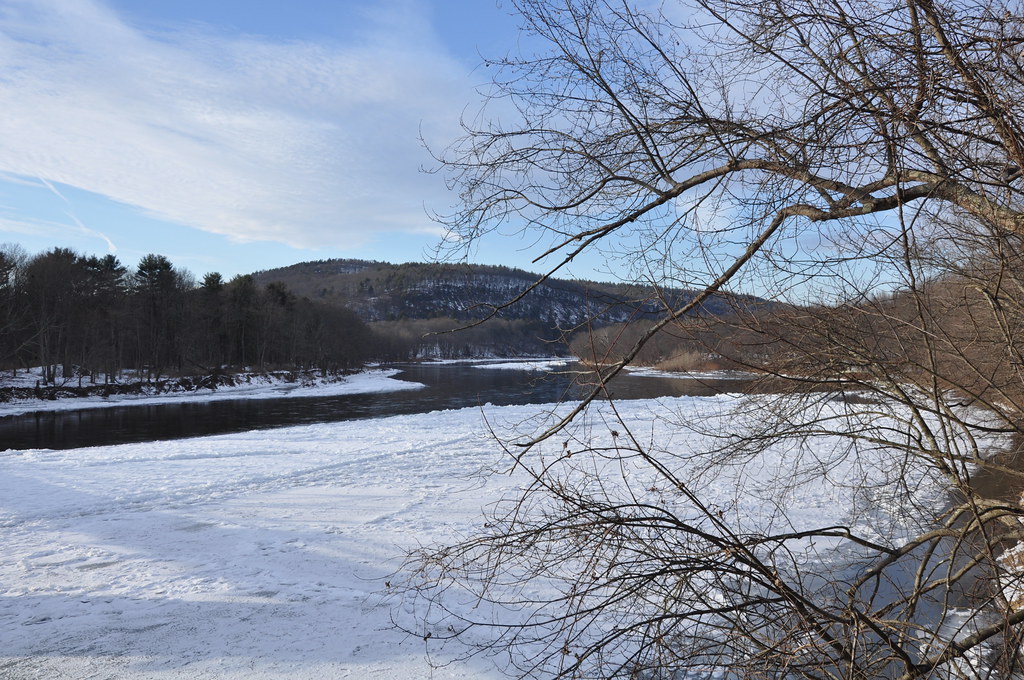 Washington pushed forward, however. He had the insight to gather all available watercraft along the Delaware beforehand, preventing the British forces from using them. These boats were 40 to 60 foot in length cargo vessels designed to haul iron ore and other heavy objects. Horses and heavy artillery crossed on large flat boats and only further delayed the start time. Other problems had arisen in the meantime. American deserters and British spies informed the Hessians of the American attack, and the weather had only worsened. Temperatures plummeted, dropping to 29 degrees, and blizzard-like conditions developed. But Washington and his troops weathered the storm. Luckily his men included those of Colonel John Glover’s Marblehead regiment, well-trained seafaring New England men. Although the Delaware was only 300 yards across, the treacherous weather made their experience necessary. A frigid ten-mile march then followed.

Despite being informed of their enemy’s planned attack, and the failings of the Continental’s effort to organize, the Hessians were still overwhelmed and defeated. Hessian Colonel Johann Rall was mortally wounded while leading his troops. Before succumbing to his wounds, he formally surrendered to Washington. Securing American victory in Trenton. The British incurred 905 casualties. 800 of them were designated as missing or captured, while 22 were fatally injured. For the Americans, however, a mere five soldiers were wounded. This victory allowed for an even greater victory later in the week during the Battle of Princeton. 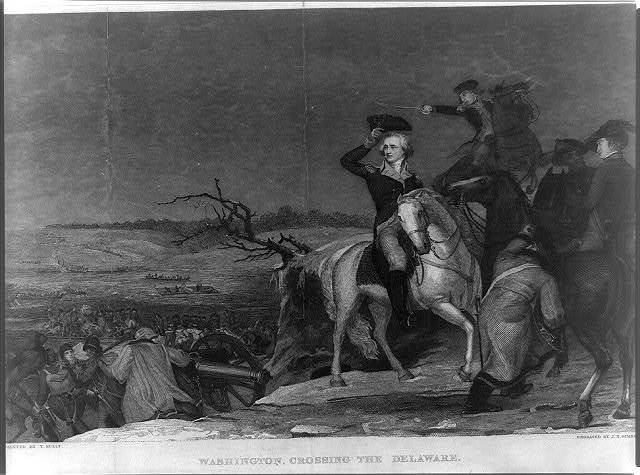 This victory is considered a major turning point for Americans in the Revolutionary War. It became a metaphor for American victory. The Americans prevailed despite the elements, organizational mishaps, and an undertrained, outnumbered military. Perhaps the Christmas spirit, and of course, the large amounts of spirits traditionally consumed, played a role. But in many states, it was pure American ingenuity. The event would be immortalized in 1851, when Emanuel Leutze, ironically enough himself a German, would paint Washington Crossing the Delaware. Today, one of the most iconic paintings depicting the Revolutionary War. It now hangs at the Metropolitan Museum of Art in New York for all to see. And what of the Hessians? Well, 3,000 of them decided the Americans showed enough valor and the country held enough opportunity for them to stay. Next time you’re enjoying a nice Christmas dinner, perhaps be glad you are not stuck in the frozen waters of the Delaware. Even if you are sitting by that uncle, you can’t stand. Continue reading US Ghost Adventures’ “This Day In History” for more quips on quarrels and other odd organizational occurrences.